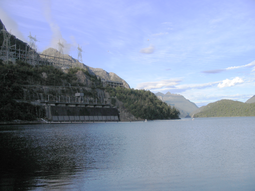 The western arm of Lake Manapouri is 10 km (6.2 mi) from Deep Cove, a branch of the Doubtful Sound - Manapouri utilises the 230-metre (750 ft) drop between these two to generate electricity. The construction of the station required the excavation of almost 1.4 million tonnes of hard rock to build the machine hall and two 10 km tailrace tunnels.

The power station was built to supply electricity to the Tiwai point aluminium smelter near Bluff, some 160 km (99 mi) to the southeast, which at peak operation consumes 620 MW of electricity. In addition to Tiwai Point, it supplies electricity to the New Zealand national grid, largely supplying the city of Invercargill and the western half of Southland.

Environmental protests by the Save Manapouri Campaign, against the planned raising of lake levels to feed the station, galvanised New Zealanders and were one of the foundations of the New Zealand environmental movement.

Since April 1999, the power station has been owned and operated by state-owned electricity generator Meridian Energy.

The power station machine hall was excavated from solid granite rock 200 metres below the level of Lake Manapouri. Two tailrace tunnels take the water that passes through the power station to Deep Cove, a branch of Doubtful Sound, 10 km away. Access to the power station is via a two-kilometre vehicle-access tunnel which spirals down from the surface, or a lift that drops 193 m down from the control room above the lake. There is no road access into the site; a regular boat service ferries power station workers and tourists 35 km across the lake from Pearl Harbour, at the eastern end of the lake.

Soon after the power station began generating at full capacity in 1972, engineers confirmed a design problem. Greater than anticipated friction between the water and the tailrace tunnel walls meant reduced hydrodynamic head. For 30 years, until 2002, station operators risked flooding the powerhouse if they ran the station at an output greater than 585 MW,(with High lake level and a low tide the station could generate up to 603MW) far short of the designed peak capacity of 700 MW. Construction of a second tailrace tunnel, 10 km long and 10 metres in diameter, finally solved the problem. The increased exit flow also increased the effective head, allowing the turbines to generate more power without using more water.

The first surveyors mapping out this corner of New Zealand noted the potential for hydro generation in the 178-metre drop from the lake to the Tasman Sea at Doubtful Sound. The idea of building a power station was first formulated by Peter Hay, the Superintending Engineer of the Public Works Department, and Lemuel Morris Hancock, the Electrical Engineer and General Superintendent of the Transmission Department of the California Gas and Electric Company during their November 1903 inspection of Lakes Manapouri and Te Anau. Each of the 1904 reports by Hay and Hancock noted the hydraulic potential of the lake systems, being so high above sea level, and while the rugged isolation of the region meant that it would be neither practical nor economic to generate power for domestic consumption, the engineers realised that the location and scale of the project made it uniquely suited to electro-industrial developments such as electro-chemical or electro-metallurgical production.

In January 1926, a Wellington-based syndicate of ten businessmen headed by Joseph Orchiston and Arthur Leigh Hunt, New Zealand Sounds Hydro-Electric Concessions Limited was granted by the government via an Order in Council the rights to develop the waters which discharged into Deep Cove, Doubtful Sound, and the waters of Lake Manapouri, to generate in total some 300,000 horsepower. The company attempted to attract Australian, British and American finance to develop the project, which would have required the construction of a powerhouse and factory complex in Deep Cove, with accommodation for an estimated 2,000 workers and wharf facilities, with the complex producing atmospheric nitrogen in the form of fertiliser and munitions. Various attempts to finance the scheme were not successful, with the water rights lapsing and the company fading into obscurity by the 1950s.

In 1955 the modern history of Manapouri starts, when Harry Evans, a New Zealand geologist with Consolidated Zinc Proprietary Ltd identified a commercial deposit of bauxite in Australia on the west coast of Cape York Peninsula, near Weipa. It turned out to be the largest deposit of bauxite in the world yet discovered. In 1956 The Commonwealth Aluminium Corporation Pty Ltd, later known as Comalco, was formed to develop the bauxite deposits. The company started investigating sources of large quantities of cheap electricity needed to reduce the alumina recovered from the bauxite into aluminium. Comalco settled on Manapouri as that source of power and Bluff as the site of the smelter. The plan was to refine the bauxite to alumina in Queensland, ship the alumina to New Zealand for smelting into metal, then ship it away to market. 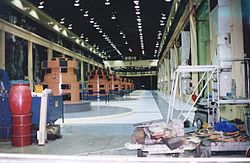