Listen (help·info), a part of Gandaki Zone, is one of the seventy-five districts of Nepal. The district, with Chame as its district headquarters, covers an area of 2,246 km² and has a population (2001) of 9,587.

The pass of Thorung La at 5415 meters above the sea connects the district to Mustang District by providing a route between the towns of Manang and Muktinath.

The Manang Valley, which lies close to the Nepal-Tibet border, offers tremendous opportunities due to its rich natural flora and fauna. Three tracks start from here. The first, via Thorangla, Muktinath, and Mustang to Lhasa—a journey that takes four days; the second via Naur Khola and Naurgaon, which takes five days to Lhasa; and finally the third via Larkiya bazar, which is the one most commonly used by the people of Central Nepal.

Along with the Marwaris who have migrated from India to Nepal in large numbers, the Manangies are the best known traders of Nepal. They have received special dispensation from the King to trade in South East Asia, and travel abroad with precious stones and metals, musk, herbs and other items. They import ready-made garments, watches and electronic goods. Many of the Manangies spend as much as six months away from home, returning only during the summers. Many of them reside in Kathmandu, where their children study in the English medium schools. The parents' lack of proficiency in the English language is irrelevant as it in no way affects their trading skills.

Since the area was opened to outsiders in the late 1970s, many have switched from the traditional agriculture to hoteleering.

The trail from Manang to Muktinath has been used by the locals for hundreds of years to transport huge herds of sheep and yak in and out of Manang. It is an important route for the people of the region.

The northern parts of Manang Valley are dry, brown and desolate places, very different from the thick forests and brown green valleys of Sikkim and Eastern Nepal. 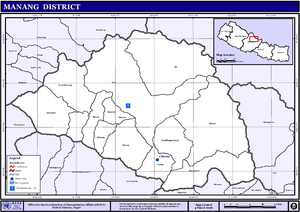 Map of the VDCs in Manang District