The main treatment for obesity consists of dieting and physical exercise.[1] Diet programs may produce weight loss over the short term,[2] but maintaining this weight loss is frequently difficult and often requires making exercise and a lower calorie diet a permanent part of a person's lifestyle.[3][4] Success rates of long-term weight loss maintenance with lifestyle changes are low ranging from 2–20%.[5]

One medication, orlistat (Xenixal), is current widely available and approved for long term use. Weight loss however is modest with an average of 2.9 kg (6.4 lb) at 1 to 4 years and there is little information on how these drugs affect longer-term complications of obesity.[6] It use is associated with high rates of gastrointestinal side effects.[6]

The most effective treatment for obesity is bariatric surgery.[citation needed] Surgery for severe obesity is associated with long-term weight loss and decreased overall mortality. One study found a weight loss of between 14% and 25% (depending on the type of procedure performed) at 10 years, and a 29% reduction in all cause mortality when compared to standard weight loss measures.[7] However, due to its cost and the risk of complications, researchers are searching for other effective yet less invasive treatments.

Studies have found significant benefits in mortality in certain populations from weight loss. In a prospective study of obese women with weight related diseases, intentional weight loss of any amount was associated with a 20% reduction in mortality. In obese women without obesity related illnesses a weight loss of greater than 9 kg (20 lb) was associated with a 25% reduction in mortality.[8] A recent review concluded that certain subgroups such as those with type 2 diabetes and women show long term benefits in all cause mortality, while outcomes for men do not seem to be improved with weight loss.[9] A subsequent study has found benefits in mortality from intentional weight loss in those who have severe obesity.[10]

Very low calorie diets provide 200–800 kcal/day, maintaining protein intake but limiting calories from both fat and carbohydrates. They subject the body to starvation and produce an average weekly weight loss of 1.5–2.5 kilograms (3.3–5.5 lb). These diets are not recommended for general use as they are associated with adverse side effects such as loss of lean muscle mass, increased risks of gout, and electrolyte imbalances. People attempting these diets must be monitored closely by a physician to prevent complications.[2]

With use, muscles consume energy derived from both fat and glycogen. Due to the large size of leg muscles, walking, running, and cycling are the most effective means of exercise to reduce body fat.[12] Exercise affects macronutrient balance. During moderate exercise, equivalent to a brisk walk, there is a shift to greater use of fat as a fuel.[13][14] To maintain health the American Heart Association recommends a minimum of 30 minutes of moderate exercise at least 5 days a week.[14]

A meta-analysis of 43 randomized controlled trials by the Cochrane Collaboration found that exercising alone led to limited weight loss. In combination with diet, however, it resulted in a 1 kilogram weight loss over dieting alone. A 1.5 kilogram (3.3 lb) loss was observed with a greater degree of exercise.[15] Even though exercise as carried out in the general population has only modest effects, a dose response curve is found, and very intense exercise can lead to substantial weight loss. During 20 weeks of basic military training with no dietary restriction, obese military recruits lost 12.5 kg (27.6 lb).[16] High levels of physical activity seem to be necessary to maintain weight loss.[17] A pedometer appears useful for motivation. Over an average of 18-weeks of use physical activity increased by 27% resulting in a 0.38 decreased in BMI.[18]

Signs that encourage the use of stairs as well as community campaigns have been shown to be effective in increasing exercise in a population.[19] The city of Bogota, Colombia for example blocks off 113 kilometers (70 mi) of roads every Sunday and on holidays to make it easier for its citizens to get exercise. These pedestrian zones are part of an effort to combat chronic diseases, including obesity.[20]

Weight loss programs often promote lifestyle changes and diet modification. This may involve eating smaller meals, cutting down on certain types of food, and making a conscious effort to exercise more. These programs also enable people to connect with a group of others who are attempting to lose weight, in the hopes that participants will form mutually motivating and encouraging relationships.[21]

A number of popular programs exist, including Weight Watchers, Overeaters Anonymous, and Jenny Craig. These appear to provide modest weight loss (2.9 kg, 6.4 lb) over dieting on one's own (0.2 kg, 0.4 lb) over a two year period.[22] Internet-based programs appear to be ineffective.[23] The Chinese government has introduced a number of "fat farms" where obese children go for reinforced exercise, and has passed a law which requires students to exercise or play sports for an hour a day at school (see Obesity in China).[24][25]

In a structured setting, 67% of people who lost greater than 10% of their body mass maintained or continued to lose weight one year later.[26] An average maintained weight loss of more than 3 kg (6.6 lb) or 3% of total body mass could be sustained for five years.[27] 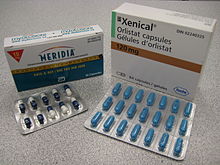 Only one anti-obesity medications orlistat (Xenical) is currently approved by the FDA for long term use.[28][29] It reduces intestinal fat absorption by inhibiting pancreatic lipase. Rimonabant (Acomplia), a second drug, works via a specific blockade of the endocannabinoid system. It has been developed from the knowledge that cannabis smokers often experience hunger, which is often referred to as "the munchies". It had been approved in Europe for the treatment of obesity but has not received approval in the United States or Canada due to safety concerns.[30][31] European Medicines Agency in October 2008 recommended the suspension of the sale of rimonabant as the risk seem to be greater than the benefits.[32] Sibutramine (Meridia), which acts in the brain to inhibit deactivation of the neurotransmitters, thereby decreasing appetite was withdrawn from the UK market in January 2010 and United States and Canadian markets in October 2010 due to cardiovascular concerns.[29][33][34]

Weight loss with these drugs is modest. Over the longer term, average weight loss on orlistat is 2.9 kg (6.4 lb), sibutramine is 4.2 kg (9.3 lb) and rimonabant is 4.7 kg (10.4 lb). Orlistat and rimonabant lead to a reduced incidence of diabetes, and all three drugs have some effect on cholesterol. However, there is little information on how these drugs affect the longer-term complications or outcomes of obesity.[6] In 2010 it was found that sibutramine increases the risk of heart attacks and strokes in people with a history of cardiovascular disease.[35][36]

There are a number of less commonly used medications. Some are only approved for short term use, others are used off-label, and still others are used illegally. Most are appetite suppressants that act on one or more neurotransmitters.[37] Phendimetrazine (Bontril), diethylpropion (Tenuate), and phentermine (Adipex-P) are approved by the FDA for short term use, while bupropion (Wellbutrin), topiramate (Topamax), and zonisamide (Zonegran) are sometimes used off-label.[28] Recombinant human leptin is very effective in those with obesity due to congenital complete leptin deficiency via decreasing energy intake and possibly increases energy expenditure. This condition is, however, rare and this treatment is not effective for inducing weight loss in the majority of people with obesity. It is being investigated to determine whether or not it helps with weight loss maintenance.[38]

The usefulness of certain drugs depends upon the comorbidities present. Metformin (Glucophage) is preferred in overweight diabetics, as it may lead to mild weight loss in comparison to sulfonylureas or insulin.[39] The thiazolidinediones, on the other hand, may cause weight gain, but decrease central obesity.[40] Diabetics also achieve modest weight loss with fluoxetine (Prozac), orlistat and sibutramine over 12–57 weeks. Preliminary evidence has however found higher number of cardiovascular events in people taking sibutramine verses control (11.4% vs. 10.0%).[41] The long-term health benefits of these treatments remain unclear.[42]

Fenfluramine and dexfenfluramine were withdrawn from the market in 1997,[28] while ephedrine (found in the traditional Chinese herbal medicine má huáng made from the Ephedra sinica) was removed from the market in 2004.[43] Dexamphetamines are not approved by the FDA for the treatment of obesity[44] due to concerns regarding addiction and abuse potential.[28] The use of these drugs is not recommended due to potential side effects.[45] However, people do occasionally use these drugs illegally.[46]

Bariatric surgery ("weight loss surgery") is the use of surgical intervention in the treatment of obesity. As every operation may have complications, surgery is only recommended for severely obese people (BMI > 40) who have failed to lose weight following dietary modification and pharmacological treatment. Weight loss surgery relies on various principles: the two most common approaches are reducing the volume of the stomach (e.g. by adjustable gastric banding and vertical banded gastroplasty), which produces an earlier sense of satiation, and reducing the length of bowel that comes into contact with food (gastric bypass surgery), which directly reduces absorption. Band surgery is reversible, while bowel shortening operations are not. Some procedures can be performed laparoscopically. Complications from weight loss surgery are frequent.[47]

Surgery for severe obesity is associated with long-term weight loss and decreased overall mortality. One study found a weight loss of between 14% and 25% (depending on the type of procedure performed) at 10 years, and a 29% reduction in all cause mortality when compared to standard weight loss measures.[7] A marked decrease in the risk of diabetes mellitus, cardiovascular disease and cancer has also been found after bariatric surgery.[48][49] Marked weight loss occurs during the first few months after surgery, and the loss is sustained in the long term. In one study there was an unexplained increase in deaths from accidents and suicide, but this did not outweigh the benefit in terms of disease prevention.[49] When the two main techniques are compared, gastric bypass procedures are found to lead to 30% more weight loss than banding procedures one year after surgery.[50]

The effects of liposuction on obesity are less well determined. Some small studies show benefits[51] while others show none.[52] A treatment involving the placement of an intragastric balloon via gastroscopy has shown promise. One type of balloon led to a weight loss of 5.7 BMI units over 6 months or 14.7 kg (32.4 lb). Regaining lost weight is common after removal, however, and 4.2% of people were intolerant of the device.[53]

Much of the Western world has created clinical practice guidelines in an attempt to address rising rates of obesity. Australia,[54] Canada,[1] the European Union,[55] and the United States[56] have all published statements since 2004.

In a clinical practice guideline by the American College of Physicians, the following five recommendations are made:[56]

A clinical practice guideline by the US Preventive Services Task Force (USPSTF) concluded that the evidence is insufficient to recommend for or against routine behavioral counseling to promote a healthy diet in unselected people in primary care settings, but that intensive behavioral dietary counseling is recommended in those with hyperlipidemia and other known risk factors for cardiovascular and diet-related chronic disease. Intensive counseling can be delivered by primary care clinicians or by referral to other specialists, such as nutritionists or dietitians.[57][58]

Lorcaserin has been found to be effective in the treatment of obesity with a weight loss of 5.8 kg at one year as opposed to 2.2 kg with placebo.[59] It however, failed to get FDA approval in 2010 due to concerns regarding cancer.[60] Temporary, controllable gastric pseudo-bezoars (swallowable, swellable foreign bodies in the stomach meant to reduce gastric volume from inside the organ) are being tested.[61] Treatment with naltrexone plus bupropion in a phase three trial resulted in a weight lose of 5–6% versus 1% for a placebo.[62] Another combination that is in trials is phentermine and topiramate (Qnexa). In October 2010 the FDA refused approval due to inadequate evidence regarding potential birth defects and cardiac side effects.[63]