Man of Steel is an upcoming American superhero film under the development of Zack Snyder, Christopher Nolan, and David S. Goyer. Based on the DC Comics character Superman, the film will be a reboot of the Superman film series. Using Chicago and Vancouver as a backdrop, and with production to be based in west suburban Plano, the film entered principal photography in August 2011, for a planned theatrical release on June 14, 2013 by Warner Bros., which also includes IMAX venues.[4]

Clark Kent is a journalist in his twenties who was adopted as a child by Martha and Jonathan Kent when he was transported to Earth from the alien planet Krypton. Kent, raised with the values of his adoptive parents, feels alienated because of his unique super abilities and struggles to find his place in life. When the world is attacked, he becomes the hero Superman to protect its people.[5] 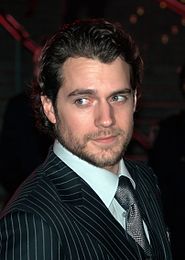 Henry Cavill is the first British actor to play Superman.

In June 2008, Warner Bros. was taking pitches from comic book writers, screenwriters, and directors on how to successfully re-start the Superman film series.[21] "I told them, it’s not that bad. Just treat Superman Returns as the Ang Lee Hulk," comic book writer Mark Waid explained. "The Incredible Hulk has proven the audience will forgive you and let you redo the franchise."[22] Comic book writers Grant Morrison, Geoff Johns, and Brad Meltzer also pitched their ideas for a reboot. Morrison's idea was similar to his work on All-Star Superman, while Waid's was akin to Superman: Birthright.[22] Mark Millar, teaming with director Matthew Vaughn, planned an epic 8-hour Superman trilogy, each installment released a year apart, similar to The Lord of the Rings.[23][24] Millar compared it to the Godfather trilogy, in which it would chronicle the entire life of Superman, from the early days of Krypton to the finale where Superman loses his powers as the sun starts to supernova.[25] August 2009 saw a court ruling in which Jerry Siegel's family recaptured the rights to Superman's origins and Siegel's copyright in Action Comics #1.[26] In addition, a judge ruled that Warner Bros. did not owe the families additional royalties from previous films, however if they do not begin production on a Superman film by 2011, then the Shuster and Siegel estates will be able to sue for lost revenue on an unproduced film.[27]

During story discussions for The Dark Knight Rises in 2010, David S. Goyer told Christopher Nolan his idea on how to present Superman in a modern context.[28] Impressed with Goyer's concept, Nolan pitched the idea to the studio,[28] who hired Nolan to produce and Goyer to write based on the financial and critical success of The Dark Knight.[29][30] Nolan admired Bryan Singer's work on Superman Returns for its connection to Richard Donner's version, but stated that the new film would not have any relationship with the previous film series.[31]

Guillermo del Toro turned down the director's position on the reboot because of his commitment on a film adaptation of At the Mountains of Madness,[32] while Robert Zemeckis was also approached.[33] Darren Aronofsky, Duncan Jones, Jonathan Liebesman, Matt Reeves, and Tony Scott were considered as potential directors,[34] before Zack Snyder was hired in October 2010.[35] Casting began the following November.[36]

With an estimated budget of $175 million,[37] principal photography began on August 1, 2011 at an industrial park near DuPage Airport under the codename "Autumn Frost".[38] Zack Snyder expressed reluctance for shooting the film in 3-D, due to the technical limitations of the format.[39] Filming is expected to last for two to three months.[37] Production took place in Plano on August 22 to August 29.[38][40] Filming then took place in the Chicago Loop from September 7 to September 17.[38] Vancouver Film Studios and Chicago are other shooting locations.[41]

Warner Bros. and DC Comics won the rights to a domain name in use by a member of the public as use for the film's official website.[42]