Man After Man: An Anthropology of the Future

Man After Man: An Anthropology of the Future 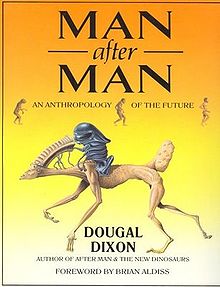 Man After Man: An Anthropology of the Future (1990) is a speculative book written by Scottish geologist Dougal Dixon and illustrated by Philip Hood. The theme of the book is a science fiction body horror exploration of the possibilities of the future evolution of humans. Unlike his previous two books, his story context focuses on individuals rather than entire species, even giving them human names.

The book begins with the impact of genetic engineering. For 200 years modern humans morphed the genetics of other humans to create genetically-altered creatures. The aquamorphs and aquatics are marine humans with gills instead of lungs. One species - the vacuumorph - has been engineered for life in the vacuum of space. Its skin and eyes carry shields of skin to keep its body stable even without pressure. Civilization eventually collapses, with a few select humans escaping to colonize space. The humans that manufactured these species degrade to simple farmers and following a magnetic reversal, were driven to extinction. Other humans, the Hitek, become almost totally dependent on cybernetic technology. With Magnetic reversal imminent, the Hitek built genetically altered humans to occupy niches: Genetically-altered humans include a temperate woodland species, a prairie species, a jungle species, and a tundra-dwelling species.

Since then the genetically-altered humans must face a new phenomenon. They can no longer be genetically tweaked in a lab, so all modifications must naturally evolve. Many new forms resulted from natural selection. Socials, colonial humans with a single reproductive parent, Fishers, otter-like fishing humans, Slothman sloth-like humans, Spiketeeth, saber-toothed predatory humans, and even parasitic humans developed through natural changes.

After five million years of uninterrupted evolution, the descendants of modern man that retreated into space returned. Then the world changed dramatically. Earth was terraformed and covered in vast alien cities. The humans and other life forms in this new Earth must breathe air with low oxygen content. Thus the alien invaders use cyborg-technology to fuse the bodies of the few human species they find useful on the planet with air tanks and respiration systems. Genetic modification also returned and giant building humans and tiny connection humans were bred to aid city construction. Genetically created horse-like men serve as mounts for the invaders. Some engineered human species even became farmed like pigs or cattle. As with all civilization, this new era of man fell apart once again.

Eventually the spacefaring humans left, the Earth was left in ruins. With barely any oxygen left in the Earth's atmosphere, all terrestrial life on the planet perished. At the bottom of the world's oceans, at the oases that were the underwater hot springs, life continue. In the abyss, was Piscanthropus profundus, a deep-sea descendant of the now-extinct Aquatic evolved. It is implied that Piscathropus profundis would eventually recolonize Earth's surface.

Homo sapiens has left Earth for life on a new planet.

Aquatics can now (for a temporary time) crawl on beaches.

The symbionts are more aggressive.

The creatures below are all the same species as they all appear to be capable of interbreeding provided that the external barriers between them where removed. The barriers between the three species below appears to be cultural e.g., the Andlas, Tic and Hitek all view each other with distance and isolate themselves from each other. Note that the distinction between a species and a subspecies is that two sub-species would merge back into a single unified population if given the chance while two species would not. It has nothing to do with 'how different' the different groups appear to be to the observer.

It has been implied that Dixon plagiarized at least some of the designs for the future humans from another illustrator, Wayne Douglas Barlowe. In Barlowe's book The Alien Life of Wayne Barlowe, Barlowe includes a section with sketches that are nearly identical to some of the creatures in Dixon's book. Barlowe asserts that they are from a project that was plagiarized by another author.