The Kölnbrein Dam is an arch dam in the Hohe Tauern range within Carinthia, Austria. It was constructed between 1971 and 1979 and at 200 m (656 ft) high, it is the tallest dam in Austria.[1] While the reservoir was filling, several cracks appeared in the dam and it took more than a decade of repairs before the reservoir could operate at maximum levels. The reservoir serves as the primary storage in a three-stage pumped-storage power system that consists of nine dams, four hydroelectric power plants and a series of pipeline and penstocks. The complex is owned by Verbund and is referred to as the Malta-Reisseck Power Plant Group. The installed capacity of the group is 1,028.5 MW and its annual generation is 1,216 GWh.[2][3][4] Currently, the Reisseck II pumped-storage power plant is under construction and will effectively connect both the Malta and Reisseck groups and add an additional 430 MW of production capacity. 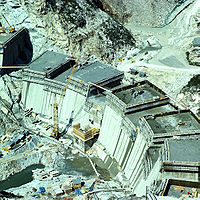 Plans for the dam were drafted in 1930 but construction did not begin until 1971. Before cement and other construction materials could be moved on site, an access road had to be constructed. This proved difficult as the Malta Valley rises over 300 m (984 ft) along a 14 km (9 mi) stretch and at times has 13 percent gradients. To complete the road, six tunnels were excavated. In 1973, as superstructure construction progressed, cement was transported on site and mixed with aggregate from local sources. To reduce thermal expansion, concrete was poured 30 m3 (39 cu yd) at a time and pipes with circulating water were placed throughout the mass. The structure consisted of 30 columns with each joint grouted. Construction conditions high in the valley were not ideal as workers coped with snow and rain along with wind speeds of 80 km/h (50 mph).[1]

By 1977, construction on the dam had reached an advanced stage where it could begin to impound its reservoir. While filling with water, cracks began to appear in the dam on its upstream heel when the reservoir level was 42 m (138 ft) below its maximum operating level of 1,902 m (6,240 ft) above sea level. Uplift pressure on the dam had unexpectedly increased as well and engineers worried that the structure's grout curtain had been damaged. Because the dam is in a "U"-shaped valley instead of the usual "V"-shaped for arch dams, hydrostatic pressure is exceptionally strong on the center-bottom (heel) upstream portion of the dam. As excessive water leaked into lower areas of the dam, the water level was drawn down and engineers increased drainage. In 1979, the grout curtain was strengthened and another full impoundment was unsuccessfully attempted. Between 1980 and 1981, a polyurethane resin grout was used to re-grout joints and they were frozen during the next impoundment attempt, allowing them to thaw naturally. As remedial works progressed, cracks near the abutments (flanks) of the dam formed as well; on the downstream side and in a horizontal direction.[5]

A plastic sheet-covered concrete blanket was laid on the upstream valley floor behind the dam between 1981 and 1983. In the next few years, the sheets had to be repaired and the grout curtain re-grouted. In 1984, the reservoir was able reach 90 percent full. In 1979 and 1983, it had temporarily reached its maximum level as well but it could not be safely sustained. In 1984, the reservoir levels were limited to 15–20 m (49–66 ft) below maximum, and at those levels it was able to operate safely though at reduced capacities.

Notwithstanding these remedial actions, a long-term solution was required. This came in the form of a 70 m (230 ft) tall "thrust block" that had to be constructed at the downstream base of the dam in order to absorb load from the dam and pressure on its abutments. Its construction was approved in 1988 and executed between 1989 and 1992. Joining the dam and the block are over 600 special neoprene pads which adjust to forces from the reservoir rising and lowering. In addition, joints and fissures in the dam were re-grouted again but with a water-tight resin epoxy.[5][6][7] The reservoir was able to operate at maximum levels and operate as normal in 1993.[8]

Diagram of the power plant and reservoir group. Click to expand.

The water in the reservoir is used to generate electricity. It is drawn down as electric load demands. Because the catchment area around the dam can only supply half the needed water to sustain its reservoir levels, a series pumps and pumped-storage power plants are utilized to supplement storage capacity. These pumps operate during periods of low power demand, filling the reservoir. When demand is high, water is released back into the system to produce hydroelectricity.[1] Of the power plant group, the Reisseck plants were constructed between 1948 and 1961 and the Malta group from 1971 to 1979.[9]

Immediately downstream from the Kölnbrein Dam is the Galgenbichl dam and reservoir. This reservoir serves to receive water from several different locations in Malta via pipeline and is the lower reservoir for the Upper stage pumped-storage power station. From the northeast, water is pumped in from several smaller reservoirs and tributaries. Water is principally received from sources to the south though. As part of the Reisseck group, water collected above the Möll River in the Reisseck and Kreuzeck mountains is pumped towards the valley. On the south side of the river, water is used to generate power at the Niklai power station. From there, the water is then received at the Rosswiese reservoir and utilized to generate power at the Kolbnitz station down in the Möll River Valley. At Kolbnitz, water can be released into the Möll River which flows into a reservoir create by the Rottau Dam. This reservoir also serves as the lower reservoir for pumping by the Rottau (Main stage) power plant which is located downstream of Kolbnitz. At Kolbnitz, water can also be received and pumped from sources to the north which primarily includes the Grosser Mühldorfer reservoir (Reisseck annual reservoir). The Grosser Mühldorfer also receives water from the Kleiner Mühldorfer, Hochalmsee and Radlsee reservoirs as well. From the Grosser Mühldorfer, water can be released back down to Kolbnitz for power production. Additional water from the Reisseck daily reservoir, about half way between Grosser and Kolbnitz, can be used as well. This completes the Reisseck scheme of plants which all together have an installed capacity of 138 MW.[10]

In the Malta group, water from the Rottau reservoir down in the Möll River Valley is pumped via the Main stage (Rottau) to the Galgenbichl reservoir below the Kölnbrein. Along the tunneled route, the Gösskar reservoir, and various tributaries provide additional water via pipeline as well. Water storage in the Galgenbichl reservoir is eventually pumped via the Upper storage pumped-storage station into the Kölnbrein reservoir. When generating electricity, water from the upper Kölnbrein reservoir is released about 200 m (656 ft) back down to the Upper stage power plant. The upper stage consists of two reversible Francis turbine generators with a total installed capacity of 120 MW. Water can then be released back through 20.4 km (13 mi) of pipeline south towards the Möll River Valley. Ultimately, it will drop from 1,704 m (5,591 ft) above sea level to 598 m (1,962 ft) through two 1.9 km (1 mi) penstocks where the Main stage (Rottau) power plant is located. The Main stage is operated by four Pelton turbines with an installed capacity of 730 MW. Water released from this plant enters Rottau reservoir on the Möll. Prior its confluence with the Drau River, water is diverted through a 2.5 km (2 mi) canal on the right bank of the river which converts into a 1.75 km (1 mi) long tunnel which feeds the Lower stage (Möllbrücke) power station. It is powered by two Kaplan turbine generators with an installed capacity of 120 MW. From the Lower stage, water is discharged into the Drau River upstream from the mouth of the Möll.[10]

Verbund is currently constructing the Reisseck II pumped-storage station which will utilize the Grosser Mühldorfer reservoir as an upper reservoir and the Gösskar reservoir as its lower. A 5.3 km (3 mi) headrace tunnel from the Grosser Mühldorfer is being excavated and will connect to the existing headrace tunnel of the Rottau main stage. Feeding water into the Reisseck II power station will be a 820 km (510 mi) long penstock. The power station will be located 200 m (656 ft) underground and contain two 215 MW reversible-Francis turbines. It will have a total installed capacity of 430 MW and increase the overall capacity of the power plant group by 40%; from 1,026 to 1,459 MW. Construction began in 2010 and is expected to be complete in 2014 at a cost of €385 million.[9] 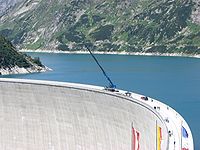 Bungee jumping at the dam

Verbund offers tours of the power plant group, in particular the Kölnbrein Dam.[4] In 2010, a skywalk was installed on top of the dam for visitors and it is a bungee jumping venue as well. The dam lies within the Hohe Tauern National Park and at the top of the Malta High Alpine Road which are tourist destinations as well. Tours of the dam occur daily while tours are the road are held between 9 May and 26 October each year.[20][21]