A trans woman (sometimes trans-woman or transwoman) is a male-to-female (MTF) transsexual or transgender person and the term trans woman is preferred by some individuals over various medical terms. Other non-medical terms include t-girl, tg-girl and ts-girl.[1][2] Transsexual is the more common term.[1]

"Transition" refers to the process of adopting a social and personal identity that corresponds to one's own sense of the gendered self, and may or may not include medical intervention (hormone treatment, surgery, etc.), changes in legal documents (name and/or sex indicated on identification, birth certificate, etc.), and personal expression (clothing, accessories, voice, body language).

"Shemale",[3][4] along with "tranny",[5][6] "ladyboy" and similar terms, are often used in a derogatory manner to indicate a trans woman possessing both breasts and male genitalia.[7] Like many potentially derogatory labels (such as faggot or dyke), some have adopted the terms as endearments, as forms of self-empowerment or as reclaimed words.[8]

Some trans women who feel that their gender transition is complete prefer to be called simply "women," considering "trans woman" or "male-to-female transsexual" to be terms that should only be used for people who are not fully transitioned. Likewise, many may not want to be seen as a "trans woman" owing to society's tendency to "Other" individuals who do not fit into the sex/gender binary, or have personal reasons beyond that not to wish to identify as transgender post-transition. For this reason, many see it as an important and appropriate distinction to include a space in the term, as in "trans woman", thus using "trans" as merely an adjective describing a particular type of woman; this is in contrast to the usage of "transwoman" as one word, implying a "third gender".[9]

The stereotype of the effeminate boy who grows up to live as a woman has a very long history.[10] It is a common misconception and stereotype that all transgender and transsexual women are heterosexual (attracted to males). However, research on the sexual orientation of trans women in the past has been dubious at best. Many studies on this issue have suffered from reporting bias, since many transsexuals feel they must give the "correct" answers to such questions to increase their chances of obtaining hormone replacement therapy. Patrick Califia, author of Sex Changes and Public Sex, has indicated that this group has a clear awareness of what answers to give to survey questions to be considered eligible for hormone replacement therapy and/or sex reassignment surgery:

"None of the gender scientists seem to realize that they, themselves, are responsible for creating a situation where transsexual people must describe a fixed set of symptoms and recite a history that has been edited in clearly prescribed ways to get a doctor's approval for what should be their inalienable right."[11]

In a 2008 study, trans women had a higher incidence of decreased libido (34%) than cisgender females (23%), but the difference was not statistically significant and may have been due to chance.[12] As in males, female libido is thought to correlate with serum testosterone levels[13][14][15][16] (with some controversy[17]) but the 2008 study found no such correlation in trans women[12].[18] 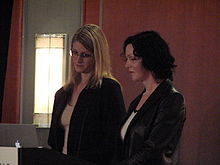