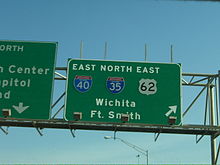 A control city is a city or locality posted on a traffic sign indicating forward destinations on a certain route. These destinations aid motorists using the highway system to reach destinations along the various routes.[1] Such cities appear on signs at highway junctions to indicate where the intersecting road goes, or on mileage signs on longer routes.

The determination of major destinations or control cities is important to the quality of service provided by the freeway. Control cities on freeway guide signs are selected by the States and are contained in the "List of Control Cities for Use in Guide Signs on Interstate Highways," published and available from American Association of State and Highway Transportation Officials.
—Federal Highway Administration, Manual on Uniform Traffic Control Devices, 2003 Edition, Chapter 2E[2]

The Manual on Uniform Traffic Control Devices (MUTCD) states that control cities should be used:

The individual states ultimately have the authority to decide which cities can be control cities,[3] but the American Association of State Highway and Transportation Officials retains the authority to approve the official list and standardizes all control cities used on the Interstate Highway system in the United States. The published standard is not always followed, for a few reasons – major destinations have since appeared that were not on the original list, new roads have been built that provide new routes, or because of state highway departments' hesitancy to sign destinations in other states. Some examples: 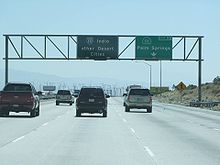 I-10 in Southern California uses Indio and "other Desert Cities" to guide motorists east. 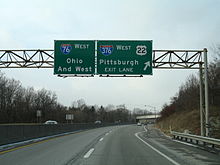 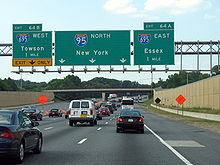 North of Baltimore in Maryland, New York is used instead of closer Philadelphia or Wilmington. 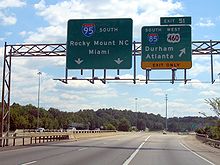 This sign in Petersburg, Virginia aids long-distance travelers, by listing the cities of Miami, Florida and Atlanta, Georgia.

A control city is not always a major city. For instance:

Occasionally, a closer large city is not a control city because a larger city is located farther along a highway. For example:

On these signs in San Francisco, both the Golden Gate Bridge and the Bay Bridge are listed as control cities

Sometimes, a building or landmark may be posted as a control city instead of an actual settlement. On highway signs in San Francisco, for example, the "control city" for northbound U.S. Route 101 is the Golden Gate Bridge, while one for eastbound Interstate 80 is the San Francisco – Oakland Bay Bridge. In the Los Angeles metropolitan area, the "control city" for the westbound Glendale Freeway (SR 2) is the Echo Park neighborhood of the city of Los Angeles.

The A20 can be used to reach the Mercier Bridge and Toronto from here in Montreal.

Control cities are particularly necessary for highways that do not follow strict linear directions. Ontario's Queen Elizabeth Way, for example, wraps around the western end of Lake Ontario, with segments proceeding both east and west at different points. Compass directions are not used at all in its central sections, and the control cities of Toronto and (for the opposite direction) Hamilton/Niagara Falls/Fort Erie are the only bearings provided.

Each of the 400-series highways uses control cities, but the common Ontario practice is to use smaller, and closer urban centres. For example, on Highway 401, Cornwall, rather than the much larger city of Montreal, is the eastbound control city east of Kingston.

Unlike in the United States and Canada, roads in Continental Europe are not signed with directional banners (east, west, north, and south), so the direction of the route is indicated by a major city or destination (directly or indirectly) reached by the route (examples FR-1 and DK-1 below). While not called "control cities", the function is the same.

Freeways, Motorways and Tollways in Australia, whilst not using the term 'Control City', operate on much the same system as in the United States and Europe. Directional markers are not used, instead the next large towns or cities which are likely to be the destination, or known waypoints for, motorists are used.