First-past-the-post (abbreviated FPTP or FPP) voting refers to an election won by the candidate(s) with the most votes. The winning candidate does not necessarily receive an absolute majority of all votes cast.

The first-past-the-post voting method, although similar in design, does not relate solely to plurality voting.[clarification needed] The system is also known as the 'winner-take-all' system, in which the candidate with the most votes gets elected.

First-past-the-post voting methods can be used for single and multiple member elections. In a single member election the candidate with the highest number, not necessarily a majority, of votes is elected. The two-round ('runoff') voting system uses a first-past-the-post voting method in each of the two rounds. The first round determines which two candidates will progress to the second, final round ballot.

In a multiple member first-past-the-post ballot, the first number of candidates, in order of highest vote, corresponding to the number of positions to be filled are elected. If there are six vacancies then the first six candidates with the highest vote are elected. A multiple selection ballot where more than one candidate can be voted for is also a form of first-past-the-post voting in which voters are allowed to cast a vote for as many candidates as there are vacant positions; the candidate(s) with the highest number of votes is elected.

The American Electoral College uses a form of first-past-the-post voting in selecting electors for all states except Nebraska and Maine. In this system, the party/candidate that gains the highest vote total wins all of the available electors.

Under a first-past-the-post voting system the highest polling candidate (or a group of candidates for some cases) is elected. In this real-life example, Tony Tan obtained a greater number than the other candidates, and so was declared the winner.

It can be seen that Labour took a majority of seats, 57%, with only 36% of the vote. The largest two parties took 69% of votes and 88% of seats. Meanwhile, the smaller Liberal Democrat party took over a fifth of votes but only about a tenth of the seats in parliament.

To a greater extent than many other electoral methods, the first-past-the-post system encourages tactical voting. Voters have an incentive to vote for one of the two candidates they predict are most likely to win, even if they would prefer another of the candidates to win, because a vote for any other candidate will likely be "wasted" and have no impact on the final result.

The position is sometimes summed up, in an extreme form, as "All votes for anyone other than the second place are votes for the winner", because by voting for other candidates, they have denied those votes to the second place candidate who could have won had they received them. Following the 2000 U.S. presidential election, some supporters of Democratic candidate Al Gore believed he lost the extremely close election to Republican George W. Bush because a portion of the electorate (2.7%) voted for Ralph Nader of the Green Party, and exit polls indicated that more of these voters would have preferred Gore (45%) to Bush (27%), with the rest not voting in Nader's absence.[3]

In Puerto Rico, there are three principal voter groups: the Independentistas (pro-independence), the Populares (pro-commonwealth), and the Estadistas (pro-statehood). Historically, there has been a tendency for Independentista voters to elect Popular candidates and policies. This phenomenon is responsible for some Popular victories, even though the Estadistas have the most voters on the island. It is so widely recognised that the Puerto Ricans sometimes call the Independentistas who vote for the Populares "melons", because the fruit is green on the outside but red on the inside (in reference to the party colors).

Because voters have to predict in advance who the top two candidates will be, results can be significantly distorted:

Proponents of other single-winner voting systems argue that their proposals would reduce the need for tactical voting and reduce the spoiler effect. Examples include the commonly used two-round system of runoffs and instant runoff voting, along with less tested systems such as approval voting and Condorcet methods. 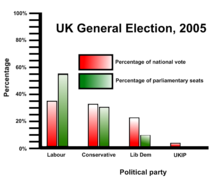 A graph showing the difference between the popular vote and the number of seats won by major political parties at the United Kingdom general election, 2005

Duverger's law is an idea in political science which says that constituencies that use first-past-the-post systems will become two-party systems, given enough time.

First-past-the-post tends to reduce the number of viable political parties to a greater extent than most other methods, thus making it more likely that a single party will hold a majority of legislative seats. (In the United Kingdom, 18 out of 23 general elections since 1922 have produced a single party majority government.)

FPTP's tendency toward fewer parties and more frequent one-party rule can potentially produce a government that may not consider as wide a range of perspectives and concerns. It is entirely possible that a voter will find that all major parties agree on a particular issue. In this case, the voter will not have any meaningful way of expressing a dissenting opinion through his or her vote.

It may also be argued that one-party rule is more likely to lead to radical changes in government policy that are only favoured by a plurality or bare majority of the voters, whereas multi-party systems usually require greater consensus in order to make dramatic changes.

Because FPTP permits many wasted votes, an election under FPTP is easily gerrymandered. Through gerrymandering, constituencies are deliberately designed to unfairly increase the number of seats won by one party at the expense of another.

In brief, suppose that governing party G wishes to reduce the seats that will be won by opposition party O in the next election. It creates a number of constituencies in each of which O has an overwhelming majority of votes. O will win these seats, but a large number of its voters will waste their votes. Then the rest of the constituencies are designed with small majorities for G. Few G votes are wasted, and G will win a large number of seats by small margins. As a result of the gerrymander, O's seats have cost it more votes than G's seats.

The presence of spoilers often gives rise to suspicions that manipulation of the slate has taken place. The spoiler may have received incentives to run. A spoiler may also drop out at the last moment, inducing charges that such an act was intended from the beginning.

Smaller parties can disproportionately change the outcome of an FPTP election by swinging what is called the 50-50% balance of two party systems, by creating a faction within one or both ends of the political spectrum which shifts the winner of the election from an absolute majority outcome to a simple majority outcome favouring the previously less favoured party. In comparison, for electoral systems using proportional representation small groups win only their proportional share of representation. However in PR systems, small parties can become decisive in Parliament so gaining a power of blackmail against the Government, a problem which is generally reduced by the FPTP system.[4][5]

Smaller parties are often excluded from any influence in government or parliament because their voters are spread across multiple regions and thus they win no seats. For example the UK Independence Party received close to one million votes in the 2010 UK General Election, approximately 10% of the party with the most votes, the Conservative Party. Yet while the latter accumulated 306 seats in Parliament, UKIP received zero. This is in contrast to proportional representation, where parties receive seats in accordance with the proportion of the electorate that voted for them.

Scholars rate voting systems using mathematically-derived voting system criteria, which describe desirable features of a system. No ranked preference method can meet all of the criteria, because some of them are mutually exclusive, as shown by statements such as Arrow's impossibility theorem and the Gibbard-Satterthwaite theorem.[6]

Y The majority criterion states that "if one candidate is preferred by a majority (more than 50%) of voters, then that candidate must win".[7] First-past-the-post meets this criterion, though not the converse: a candidate does not need 50% of the votes in order to win.

N[8] The Condorcet winner criterion states that "if a candidate would win a head-to-head competition against every other candidate, then that candidate must win the overall election". First-past-the-post does not[8] meet this criterion.

N[8] The Condorcet loser criterion states that "if a candidate would lose a head-to-head competition against every other candidate, then that candidate must not win the overall election". First-past-the-post does not[8] meet this criterion.

N The independence of irrelevant alternatives criterion states that "the election outcome remains the same even if a candidate who cannot win decides to run." First-past-the-post does not meet this criterion.

N The independence of clones criterion states that "the election outcome remains the same even if an identical candidate who is equally-preferred decides to run." First-past-the-post does not meet this criterion.