The Whitecaps are the 17th team of Major League Soccer and replace the USSF Division 2 team of the same name, which was owned and managed by the same group that operates the MLS team, and which played through the conclusion of that league's 2010 season. The MLS team is the third to share the legacy of the Whitecaps name.

An ownership group in Vancouver were granted the seventeenth Major League Soccer franchise on March 18, 2009 by MLS Commissioner Don Garber.[3] While no name was provided at the Vancouver announcement, over a year later the club confirmed it would keep the Whitecaps name.[4][5][6][7]

In preparation for its first MLS season, the Whitecaps brought in executive talent from around the world. On November 24, 2009, Paul Barber, former Tottenham Hotspur F.C. executive, was announced to join the club as CEO. Others joining him included former D.C. United head coach Tom Soehn as Director of Operations and Dutch national Richard Grootscholten as the Technical Director and head coach of the residency program.

As the head coach of the USL and later USSF Division 2 Vancouver Whitecaps, former Iceland international Teitur Thordarson was confirmed as head coach on September 2, 2010 for the inaugural MLS season.[8] He was subsequently relieved of his duties on May 30, 2011 after the Whitecaps won just one of their first twelve matches. Tom Soehn, Whitecaps FC director of soccer operations, replaced Thordarson on an interim basis.[9]

The Whitecaps began play in the 2011 MLS season with their first match on March 19, 2011, against rival Canadians Toronto FC, which they won 4–2. The first goal in the Whitecaps' MLS era was scored by Eric Hassli.[10] After their winning start the Whitecaps struggled, and failed to secure another victory in their next 11 MLS games, drawing six and losing five. In the aftermath of their 1–1 tie with the New York Red Bulls on May 30 head coach Teitur Thordardon was fired.[11] Tom Soehn took over coaching duties for the remainder of the 2011 season, while Martin Rennie was announced as the new permanent head coach on August 9, taking over officially on November 3.[12]

On June 8, 2010, it was officially announced the club would continue using the "Whitecaps" name, but with a redesigned logo.[13] The name alludes to the geographic features surrounding the city: white-capped mountains to the north and the Pacific Ocean's white-crested waves to the west.

The official club colours include navy blue ("deep sea"), white, and light blue ("Whitecaps blue"). The "deep sea" blue represents the maritime landscape of the Vancouver area and the "Whitecaps blue" indicates the reflection of the North Shore Mountains in the Pacific Ocean. The lighter shade of blue also alludes to the primary colour of the original Whitecaps, winners of Soccer Bowl 1979. The silver outline pays homage to the team's championship victories since 1974.[14]

On June 10, 2010, the Whitecaps strip package was unveiled with Bell Canada serving as the inaugural jersey sponsor.[15][16] The home shirt is white with horizontal, navy blue pinstripes; the stripes broaden slightly from bottom to top. The secondary shirt is deep blue with an embossed, interlocking diamond pattern which is also deep blue and is reflective in the light. 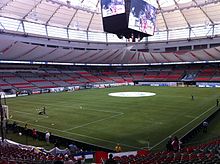 Whitecaps FC played most of its inaugural 2011 season at Empire Field, a temporary stadium built at the former site of Empire Stadium to house the BC Lions, while BC Place Stadium was renovated and fitted with a new retractable roof. Empire Field has spectacular views of the mountains which ring the city of Vancouver, providing an immediately recognizable backdrop for Whitecaps games.

The Whitecaps played its first home match at BC Place on October 2, 2011 against Cascadia Cup rivals Portland Timbers.

The organization initially hoped to build Whitecaps Waterfront Stadium in Gastown in time for the 2016 season, but its owner has reportedly committed to BC Place in light of stadium opposition.[17] 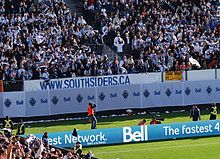 The largest Whitecaps supporters group is known as the Southsiders. The group began in 1999 when fans of the Vancouver 86ers began congregating in the pitch-level beer garden behind the goal at the south end of Swangard Stadium.[19][20]

The Southsiders' relationship with the team's ownership has not always been amicable.[19] It has evolved since Vancouver received the MLS expansion team.[21] Images of the Southsiders are featured prominently in Whitecaps’ marketing campaigns. The group's board was invited to the invite-only launch of the kits and logo to be used in the MLS.[22][23] The expansion has also increased membership. The president of the organization said that it had grown from about 40 paid members to 100 paid in July 2010. He also believes there is no reason why the Southsiders cannot outdo the Seattle Sounders' Emerald City Supporters.[24] Southsider supporters are primarily located on the eastern-half of the southern stands of Empire Field.

Another group, "La Doce", formed in January 2011.[25] Their original name in Spanish is "La 12",[25] which can be translated into English as "The 12th" or "The 12th player". La 12 is formed by people from different nationalities that have a preference to support the Whitecaps in a Latin American, Southern European or Eastern European Style. The main feature of La 12 is its cheering style that features constant drumming and longer songs, resembling the way in which fans in South America or Southern or Eastern Europe like to support.[25] La 12 fans are primarily seated in the southeast corner of Empire Field.

The Vancouver Whitecaps have longstanding rivalries with both the Seattle Sounders and the Portland Timbers. The rivalries predate the MLS and have been an integral part of the soccer culture in the Pacific Northwest. Matches between these three teams are arguably the most passionate in all of MLS as each of these teams are well-supported by their respective cities.[26][27]

The Vancouver Whitecaps also have rivalries with Toronto FC and the Montreal Impact. Vancouver's first game in the MLS was against Toronto in an attempt by the league to spur a rivalry between the two Canadian teams.[28] Montreal was a rival in the second division. The three teams have played each other during Voyageurs Cup competitions.[29][30]

In March 2011, Rogers Media announced that it had signed a 3-year deal with the team to broadcast 24 Whitecaps games per season. Telecasts will be aired on Rogers Sportsnet, Rogers Sportsnet One, and a single game on CKVU-TV, Vancouver's Citytv station.[31] TSN will also air select games nationally as a part of the network's new contract with MLS.[32][33]

Also announced this year, a radio partnership with TEAM Radio, a Bell Media company. Game are broadcast on TEAM 1410 with select games on TEAM 1040.[34] Peter Schaad and Paul Dolan call the action with Joey Kenward, David Norman and Tyler Green a part of the pre- and post-match shows.

This list shows players who have played for the team in official 2011 MLS Reserve Division games, but are not part of the senior roster.[36]

The Vancouver ownership group is composed of four men; Greg Kerfoot, Steve Luczo, Jeff Mallett, and Steve Nash.[38] Kerfoot is the owner of the full Whitecaps FC organization (which owned the USSF 2 team as well as a women's team and several youth and developmental teams) and formerly the CEO of Crystal Decisions Software. Luczo is president/CEO/chairman of the board for Seagate Technology and part owner of the National Basketball Association's Boston Celtics. Mallett, a Vancouver native who was raised in Victoria, British Columbia, was formerly the president and COO of Yahoo! and is currently a part owner of Major League Baseball's San Francisco Giants. Nash, also raised in Victoria, is the starting point guard for the Phoenix Suns and two-time NBA MVP,[39] as well as the older brother of recently retired Whitecaps FC midfielder and current Whitecaps staff coach Martin Nash.