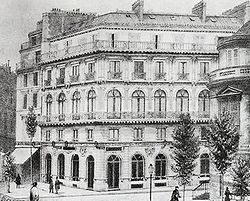 The Maison dorée, with the café Tortoni on the left and the café Riche on the right. About 1900

The Maison Dorée story begins with the Stainville-Choiseul hotel where Madame Tallien lived. She was known as "Our Lady of Thermidor," the most famous of the Marvelous, a group of eccentric women at the time of the French Revolution.

The story continues with the Café Hardy, famous during Napoleon's Empire, which was established at the junction of the Boulevard de Gand (now Boulevard des Italiens) and the rue Cerutti (now rue Laffitte). At the Café Hardy, according to one source, "you could eat the best chops in Paris, andouillettes stuffed with truffles ... that would give appetite to a dying guy. "[1]

It was the most expensive restaurant in Paris, heralded by contemporary newspapers: "You have to be rich to dine at Hardy and bold to dine at Riche" ("hardy" means "bold" in French; Café Riche was on the other side of the rue Laffitte).

The property was sold at a very high price in 1836 to the Hamel brothers, who already owned the café de Chartres (the Grand Véfour) at the Palais-Royal.

Although the date 1839 appears on the facade of the building, exactly when it was built is unknown. Initially, the restaurant was called "Restaurant of the Cité," but because of its luxurious design, with paintings and mirrors, and gilding on the balconies and balustrades, the public named it "Maison Dorée." [2]

The restaurant was divided into two sections: one section accessible from the boulevard, for ordinary people, and another section, accessible via rue Laffitte, for wealthy customers. This section had luxurious and discrete "Cabinets," or private rooms. The most desired was Cabinet 6, which was reserved for nobility as well as for very wealthy people. The restaurant's magnificent wine cellar, with 80,000 bottles of wine, attracted the rich revelers and party-goers of Paris.

People who dined there included the future King Edward VII, Lord Sémour, and the Baron de Saint Cricq. Novelists of the time could be found there, most famously Balzac, who had a character from his novels, Lucien de Rubempré, eat there. In the novel In Search of Lost Time, Marcel Proust's character Swann enters the restaurant looking for Odette. When he doesn't find her there, he falls deeply in love.[2]

It has been claimed that the dish tournedos Rossini was created by the chef of the Maison Dorée, Casimir Moisson, who created the recipe for the composer Gioachino Rossini, a regular customer.

In the building above the restaurants, several newspapers opened editorial offices. In 1853, Alexandre Dumas moved the offices of his newspaper "Le Mousquetaire" to the building.

The same building was the site of the 8th and last Impressionist painting exhibition, which took place on May 15, 1886. Impressionism, which had started at 35 boulevard des Capucines in 1874, ended on boulevard des Italiens 12 years later. 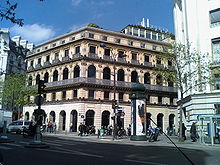 The Maison Dorée finally closed in 1902. The building was divided into several offices and shops. In 1909, part of the building became a post office.

Between 1974 to 1976, BNP Paribas moved its corporate headquarters into the building. The French Minister of Culture at the time, Maurice Druon, facing pressure from a neighborhood preservation committee, encouraged the company to maintain the building's historic facade. BNP's architect, "in one day of rage against the old timers," created a new project in which he proposed to integrate an entirely new interior into the historic facade. This marked the first transformation of what became a highly controversial movement called facadism. [3] [4]