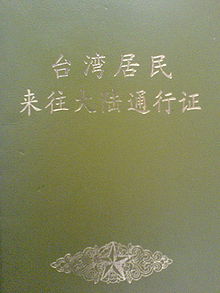 This travel permit will permit Taiwanese people to work and live in China.

Due to the special political status of Taiwan, neither the PRC nor the ROC recognizes the passports issued by the other and neither party considers travel between mainland China and Taiwan as formal international travel. The Taiwan Compatriot Entry Permit is therefore issued as the travel document for Taiwan residents to enter mainland China since 1987, when then ROC President Chiang Ching-Kuo decided to lift the mutual travel ban across the Taiwan Strait. Its counterpart for citizens of mainland China is the Entry Permit of Mainland Residents to the Taiwan Area.

The design of the document takes the form of a regular machine-readable passport, but it does not have the National Emblem of the People's Republic of China printed on its cover as the regular PRC passport has. The document is valid for 5 years and has 32 pages.

The Taiwan Compatriot Entry Permit is practically the only valid identity document for Taiwan residents in mainland China. As a result this travel document is also regarded and widely used as an identity document in mainland China, and can be accepted in cases of real estate purchasing, banking, taking medical treatment, insurance, employment etc. Due to this usage as an identifying document, and the increasing instances of Taiwan residents' long-time stay and settlement in mainland China, on 7 September 2008, the Taiwan Affairs Office announced that effective 24 September 2008, the issue number of the Taiwan Compatriot Entry Permit of Taiwan residents will remain unchanged during the person's lifetime. The Taiwan Affairs Office also opened 6 more airports eligible for entry-permit-on-arrival.[2] Since 20 October 2008, Beijing, Tianjin, Chongqing and Zhejiang can issue the 5-year permit. Together with Shanghai, Jiangsu and Fujian, there are, as of October 2008, 7 provinces and municipalities authorized to issue the permit to Taiwan residents.[3]

Taiwan residents can apply for a Taiwan Compatriot Entry Permit in MPS's Hong Kong or Macau branches. For each entry into mainland China, Taiwan Compatriot Entry Permit holders need to apply for a permit, which is an immigration stamp that shows the document bearer's allowed duration of stay inside mainland China. In Hong Kong, Taiwan residents can apply at Hong Kong International Airport; in Macau at the Macau International Airport, and they can apply for stay extensions at MPS's branches across mainland China. Permits are classified as:

Certain employing, employment, studying or investment certification is required when applying for a 2- or 3-year multi-entry permit. In practice most Taiwanese travel agencies will prepare the necessary forms and have the documents with valid entry permits sent to Taiwan by air. Around 1% of the applications are rejected, mainly to sensitive identities such as pro-Taiwan independence/Tibet independence figures, Falun Gong members and the like.[citation needed] This document's bearer can also apply for 3-month entry-permit-on-arrival in the following mainland Chinese airports or harbors, so long as this document remains valid: