Maina Maaji Lawan is a Nigerian politician and former governor of Borno State in Nigeria who is now a member of the Senate for the Borno North constituency.[1]

Maina Maaji Lawan was born on 12 July, 1954. He has a Bachelor's Degree in Business Administration[1]

He was a member of House of Representatives from 1979-1983. In the third republic he was elected governor of Borno State in 1992-1993.[1] As governor, he put a committee in place to consider closing down some tertiary institutions, a move aimed at discouraging education in Biu Emirate.[2]

He was a senator between 1999 and 2003 on the platform of People's Democratic Party (PDP). He moved over to the All Nigeria Peoples Party (ANPP) after he failed to secure the PDP governorship ticket in 2003.[3] The objections to his running again for governor may have related to a feud with Alhaji Kashim Ibrahim-Imam, presidential liaison officer, when he was governor in 1992-1993.[4] Ibrahim-Iman beat him in the PDP primaries for Borno state by two votes.[5] In an interview, however, Maina Lawan stated that the reason he was not elected was because he was not in the Obasanjo camp.[6]

In A July 2004 report on a land scam in the Federal Capital Territory, the Economic and Financial Crimes Commission (EFCC) named Maina Maaji Lawan as possibly having benefited based on land purchase records.[7] 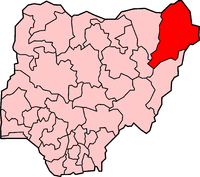 In April 2007, Lawan ran for the Senate as a member of the ANPP and was elected for the Borno North constituency. He was appointed to the selection committee.[1] He was the Senate minority leader. A May 2009 report said he had not originated any bills as a senator.[8]

In February 2008 he sponsored a motion on the security implications of the crises in the Chad Republic, including the problem of Chadian refugees fleeing to Nigeria.[9] In February 2008, as a member of the Senate Committee on Petroleum (Upstream), he criticized the Group Managing Director of the Nigerian National Petroleum Corporation for failure to cooperate with the committee.[10]

In June 2008, he spoke in favor of confirmation of Ms. Farida Waziri as Chairman of the Economic and Financial Crimes Commission.[11] In March 2009, as Vice-Chairman of Senate Committee on the Independent National Electoral Commission (INEC), he spoke against a motion that questioned the integrity of INEC Chairman Professor Maurice Iwu.[12]

Maina Ma’aji Lawan ran successfully for reelection to the Borno North Senatorial seat in the April 2011 elections, again on the ANPP platform.[13]