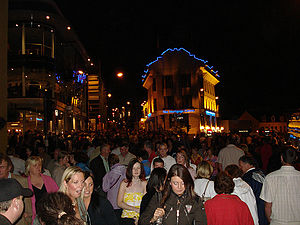 A crowded Upper Main Street. Crossview House can be seen in the background.

Main Street (Irish: An Phríomhshráid) is an important thoroughfare in Letterkenny, County Donegal, Ireland. It is the longest street in Ireland. [1] [2]The street is divided into two sections. Lower Main Street runs from the junction at Oldtown Road to the Market Square. Upper Main Street runs from the Market Square to the junction at Crossview House. Traffic flows in a one-way system from Crossview House downwards. The road junctions on the street are:

Theobald Wolfe Tone was captured and held on the street during the Irish Rebellion of 1798. He was held for a short time at Laird's Hotel opposite the Market Square[3] before being transferred to the nearby Derry Gaol. The Wolfe Tone Bar was established in his honour and is located on Lower Main Street on the site of the old Garda barracks.[4] The Barracks building had been there since the 1850s and was an RIC Barracks up to 1922.[5]

Hiring Fairs were held in Letterkenny in years gone by when children between the ages of 11 and 16 were sold for periods of six months to wealthy farmers of the Lagan Valley. These Rabble Days were held annually in May and November at Speer's Lane, at the corner of Upper Main Street. The monument Rabble Children by Maurice Harron was erected at the Market Square in December 1994.[6]

Regeneration works were carried out on Lower Main street in late 1996. Footpaths were widened and cobblestones were placed on the street at the junction with Larkin's Lane. These cobblestones were removed in 2008. The street was the main location of events when the town hosted the Fleadh Cheoil in 2005 and 2006. The Lower Main Street pavements have since fallen into a higgledy-piggledy bad state of repair which has led to calls from the local council for re-paving to be carried out.[7]

In August 2009 the Lower Main Street was nearly blown-up when a severed gas pipe was discovered in an alleyway. The street was sealed off as the gas spread around the area. Occupants in nearby buildings were evacuated while attendants at the Wolfe Tone Bar were kept inside for fear of igniting the gas. A gas engineer later shut off the supply of gas from the meter.[17][18] [19]

In 2011 a Garda officer and three nightclub bouncers were repeatedly stabbed outside the Voodoo Nightclub. One of the bouncers had his leg penetrated by the blade while the Garda had his hand slashed.[20][21][22]

Main Street once served as the main shopping area in the town but trade has now shifted further afield. The Main Street is still home to many older establishments including R.McCullagh Jewellers,[23] dating from 1869, and Speers Department Store. It is also acts as the financial services centre of the town with the majority of banks being located there.

Today the street is a centre for popular night clubs such as Club Voodoo. It is a popular nightspot at weekends, being the location of many stag and hen parties. The street can become quite vicious in the early hours of the morning and this has led many local to steer clear. The area has seen numerous assaults,[24] stabbings,[25][26][27] sexual assaults,[28][29] drug raids,[30] and attacks on Gardaí[31] in the past.

The Courtyard Shopping Centre is located near the mid-point of the street. The centre is laid out over three floors. Current tenants include Eason and Heatons.

The Market Centre is a small shopping centre located opposite the Market Square. It has a gathering of shops spread around a flat shopping mall.