The Main-Neckar Railway (German: Main-Neckar–Eisenbahn) is a main line railway west of the Odenwald in the Upper Rhine Plain of Germany that connects Frankfurt am Main to Heidelberg via Darmstadt, Bensheim and Weinheim. It was opened in 1846 and is one of the oldest railways in Germany.

The Main-Neckar Railway was built and operated as a joint state railway company, known as a condominium railway (Kondominalbahn), by the Free City of Frankfurt, The Grand Duchy of Hesse-Darmstadt and the Grand Duchy of Baden.

Negotiations between the states

The plans for the railway dated back to 1835. However, years went by until the three states involved agreed on routes and how it would be organised. Not until 1838 was a treaty for the construction of a Railway from Frankfurt to Mannheim via Darmstadt agreed. The Hessian Railway Company could not raise the required capital and it was then dissolved. There was a second treaty signed of 21 and 23 March 1843, which agreed to build the Main-Neckar line at government expense and—as a compromise between the interests of Mannheim and Heidelberg—located the line centrally in Friedrichsfeld where it joined the Mannheim–Heidelberg line of the Grand Duchy of Baden State Railway. Baden requested that the line be built to 1600 mm broad gauge but could not gain agreement for this.[3] Responsibility for funding the project was in proportion to the length of the line in the three countries: Frankfurt: 6.9 km, Hesse-Darmstadt: 49.4 km and Baden: 38.8 km. All three governments were represented in the management of the Main-Neckar Railway in Darmstadt.

The construction of the line began in June 1843 on the Frankfurt section. The management of construction was carried out by municipal chief engineer Remigius Eyssen. On 16 April 1846, the first trial service ran from Darmstadt to Langen.[4] The fare for this trip was 1 guilder and 6 kreuzers for first class, 48 kreuzers for second class, 33 kreuzers for third class and 21 kreuzers for fourth class.

The line was opened for the scheduled traffic in sections:

Until the Main-Neckar Bridge in Frankfurt (at the site of today's Friedensbrücke) was completed on opened to traffic on 15 November 1848, rail services ran into the Mainspitze depot and reversed to the old Sachsenhausen station. After the completion of the bridge over the Main the line ended in Main-Neckar station. The original temporary wooden bridge at Ladenburg was replaced by a stone arch bridge in 1848.[8]

Since the Baden Mainline between Mannheim and Heidelberg was built with a broad gauge of 1600 mm and the Main-Neckar line with standard gauge of 1435 mm, additional track had to be built: from Friedrichsfeld to Heidelberg a second line ran next to the line of the Baden State Railway line. From Friedrichsfeld to Mannheim, the Baden State Railway built an additional standard gauge track at its own expense, although it was operated by the Main-Neckar Railway.[9]

A train leaving the old Heidelberg Station in 1840

The route began in Frankfurt at the Main-Neckar station, one of the three Frankfurt western stations. It was in the (present) Willy-Brandt-Platz on the corner of Münchner Straße and Gallusanlage, south of the Taunus station. It was demolished in 1888. Similarly the old Main-Neckar Darmstadt station was replaced by the current Darmstadt Hauptbahnhof between 1910 and 1912 and the old Heidelberg station, which was opened in May 1848,[10] was replaced by the current Heidelberg Hauptbahnhof in 1955 and demolished in 1960. Each of these stations proved too small for the rapidly growing traffic and were replaced by bigger stations built further from the centre of the towns they serve. The architectural quality of the reception buildings on the line was high. In Bensheim and Heppenheim they were designed by Georg Moller. 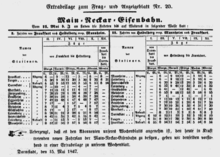 Initially the railway had 18 locomotives and 252 cars. Twelve locomotives were bought by Hesse-Darmstadt from the Sharp locomotive works of Manchester. The six locomotives purchased of Baden and Frankfurt came from Kesslers Maschinenfabrik in Karlsruhe. All locomotives had a 1A1 wheel arrangement.

On 9 August 1847 freight operations started, with freight carried by mixed trains, until 1848 when separate freight trains proved successful.[11] In the first 15 years of operations, freight volume increased thirty times while the number of passengers carried increased by 50%. The Main-Neckar line was completed and fully open to traffic with the commissioning of the Main-Neckar bridge in Frankfurt on 15 November 1848.

From 18 May 1849 the line was closed to traffic south of Heppenheim as a result of the Baden Revolution and on 6 and 7 June 1849 the line was used exclusively for military transport. Civil operations only resumed on the entire route on 27 June 1849. Operations were also temporarily disrupted in the War of 1866.[12]

The Main-Neckar Railway brought jobs and income for the people of the Bergstrasse and the western Odenwald. It connected Darmstadt, Mannheim and Frankfurt. Getting a job in the railways, however, was not so simple, many people competed for the jobs available. Only men with impeccable reputation, able to satisfy a thorough examination that they were in perfect health, would be allowed to make the substantial deposit for the coveted dress uniform of railway workers. Somebody who had ruined his health, for example, in the construction of the railway, had no chance.

Development of the Main-Neckar Railway

In the following years, the line was constantly developed, modernised and adapted to increasing traffic and the changing needs of passengers. 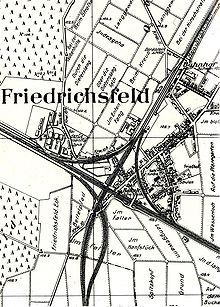 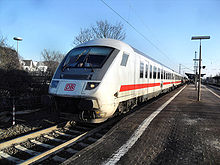 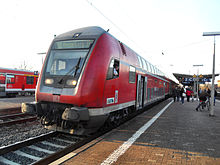 Today, the Main-Neckar line shares the load of north-south traffic with the Riedbahn, which runs further to the west in the Rhine valley, from Frankfurt, bypassing Darmstadt, via Groß-Gerau to Mannheim and Worms. On the section between Darmstadt and Mannheim/Heidelberg, the Main-Neckar Railway has reached the limit of its capacity: 250 trains run on the line in each direction every day. Between Frankfurt and Darmstadt, where the line has three or four tracks, the line is used by the Rhine-Main S-Bahn. This will be relieved by the proposed Frankfurt–Mannheim high-speed railway between Frankfurt Airport and Mannheim, which will take a portion of the high-speed and long-distance trains. Construction is expected to start in 2011 and be completed in 2017.

The Main-Neckar railway bridge line is an important route for north-south traffic, especially freight traffic between the North Sea ports and southern Germany and Switzerland. The bridge is used by 600 trains each day, including trains operating over the Frankfurt–Bebra and Frankfurt-Hanau lines.

Regional-Express trains stop only in Frankfurt, Langen, Darmstadt, Bickenbach, Bensheim, Heppenheim, Hemsbach, Weinheim and Ladenburg. Regionalbahn trains stop between Frankfurt and Darmstadt only in Langen, then stop at all stations. Lützelsachsen and Großsachsen-Heddesheim stations are served every two hours only. Stations between Frankfurt and Darmstadt via Frankfurt South are served by S-Bahn lines S3 and S4. Between 5 AM and midnight trains run every hour and during peak hours every 30 minutes.