The Supreme Court of Indonesia (Indonesian: Mahkamah Agung Republik Indonesia) is the independent judicial arm of the state. It maintains a system of courts and sits above the other courts and is the final court of appeal. It can also reexamine cases if new evidence emerges. 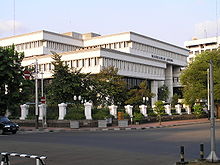 According to the Constitution, candidates for Supreme Court Justices must have integrity and be of good character as well as be experienced in law. Candidates are proposed to the House of Representatives by the Judicial Commission.[3] If the House of Representatives approves them, their appointment is then confirmed by the president. The chief justice and his or her deputy is chosen from among the members.[4] As of mid 2011, there was a total of 804 courts of various kinds in Indonesia.[5] About 50 justices sat in the Supreme Court while other high and lower courts across Indonesia employed around 7,000 judges.[6]

Like most of the Indonesian legal system, the Supreme Court is badly overloaded with demands on resources. One observer has noted that "the Supreme Court is drowning in an increasing flood of new cases each year".[7] In 2010, for example, there were reportedly more than 22,000 cases before the court of which the court managed to rule on less than 14,000.[8] Partly in response to pressures of this kind, proposals for reform of the way that court business is conducted have been under consideration for some time. Current proposals (2011) indicate that a new chamber structure will be introduced to try to improve the operations of the court. The plan is to introduce a system of five chambers which will deal with criminal, civil, religious, administrative, and military affairs. However, the changes are controversial so further reforms may be needed in due course.[9]

The funding for the Supreme Court allocated from the national government budget in 2010 was slightly over Rp 6.0 trillion (around $US 700 million at the prevailing foreign exchange rate).[10]

The central problem appears to be that the institutions and mechanisms for enforcement of the legal system, including the decisions of the Supreme Court, are underfunded and are operationally weak. There are thus numerous instances of long delays in the enforcement of the decisions of the Supreme Court.[11] As just one example, in a well publicised case, one of Indonesia's leading universities, the Bogor Agricultural Institute, was instructed by the Supreme Court to release certain details of controversial research conducted within the institute relating to the testing of formula milk brands on sale in Indonesia. However following the Supreme Court ruling, the institute failed to comply and even failed to pay a trivial fee (around $230) incurred as a result of certain proceedings during the conduct of the case.[12] Numerous other cases of delays are regularly reported in the Indonesian media and are commented on by lawyers who have won cases in the Supreme Court.