Nepal Police Club formerly known as Mahendra Police Club is departmental police football club of Nepal. They currently play in the top division of the country.

Established five decades ago and named after King Mahendra Bir Bikram Shah Dev, Mahendra Police Club has been part of the new Nepal League since its inception in 2003.The club finished runners-up in the 2004-05 season and were third last year.

The year 2007 has been the most successful year for Mahendra Police Club.They started well in the 2006-07 season with a perfect blend of experienced and amateur players and clinched the Martyr's Memorial A-Division League title. MPC, who have won all Nepalese knock-out tournaments till date, have solid a backline led by experienced national defender Rakesh Shrestha with young but experienced Ritesh Thapa under the bar. Another national team veteran Hari Khadka, former national midfielder Ananta Thapa, Jumanu Rai and Ramesh Budhathoki hold the key to their fortunes in the AFC President’s Cup. Another achievement of MPC was to be the runners-up in the AFC President's Cup 2007 after creating an upset in the semi-finals by beating Regar Tursunzoda. MPC won US $ 25,000 being the runners-up. 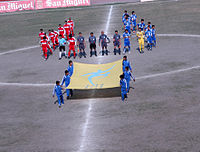