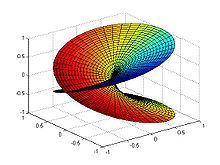 In mathematics, particularly in complex analysis, a Riemann surface, first studied by and named after Bernhard Riemann, is a one-dimensional complex manifold. Riemann surfaces can be thought of as "deformed versions" of the complex plane: locally near every point they look like patches of the complex plane, but the global topology can be quite different. For example, they can look like a sphere or a torus or a couple of sheets glued together.

Every Riemann surface is a two-dimensional real analytic manifold (i.e., a surface), but it contains more structure (specifically a complex structure) which is needed for the unambiguous definition of holomorphic functions. A two-dimensional real manifold can be turned into a Riemann surface (usually in several inequivalent ways) if and only if it is orientable and metrizable. So the sphere and torus admit complex structures, but the Möbius strip, Klein bottle and projective plane do not.

Geometrical facts about Riemann surfaces are as "nice" as possible, and they often provide the intuition and motivation for generalizations to other curves, manifolds or varieties. The Riemann–Roch theorem is a prime example of this influence.

There are several equivalent definitions of a Riemann surface.

Tori are the only Riemann surfaces of genus one, surfaces of higher genera g are provided by the hyperelliptic surfaces

where P is a complex polynomial of degree 2g + 1.

We noted in the preamble that all Riemann surfaces, like all complex manifolds, are orientable as a real manifold. The reason is that for complex charts f and g with transition function h = f(g−1(z)) we can consider h as a map from an open set of R2 to R2 whose Jacobian in a point z is just the real linear map given by multiplication by the complex number h'(z). However, the real determinant of multiplication by a complex number α equals |α|2, so the Jacobian of h has positive determinant. Consequently the complex atlas is an oriented atlas.

The above fact about existence of nonconstant meromorphic functions can be used to show that any compact Riemann surface is a projective variety, i.e. can be given by polynomial equations inside a projective space. Actually, it can be shown that every compact Riemann surface can be embedded into complex projective 3-space. This is a surprising theorem: Riemann surfaces are given by locally patching charts. If one global condition, namely compactness, is added, the surface is necessarily algebraic. This feature of Riemann surfaces allows to study them with either the means of analytic or algebraic geometry. The corresponding statement for higher-dimensional objects is false, i.e. there are compact complex 2-manifolds which are not algebraic. On the other hand, every projective complex manifold is necessarily algebraic, see Chow's theorem.

As an example, consider the torus T := C/(Z + τ Z). The Weierstrass function

belonging to the lattice Z + τ Z is a meromorphic function on T. This function and its derivative

generate the function field of T. There is an equation

where the coefficients g2 and g3 depend on τ, thus giving an elliptic curve Eτ in the sense of algebraic geometry. Reversing this is accomplished by the j-invariant j(E), which can be used to determine τ and hence a torus.

The realm of Riemann surfaces can be divided into three regimes: hyperbolic, parabolic and elliptic Riemann surfaces, with the distinction given by the uniformization theorem. Geometrically, these correspond to negative curvature, zero curvature/flat, and positive curvature: stating the uniformization theorem in terms of conformal geometry, every connected Riemann surface X admits a unique complete 2-dimensional real Riemann metric with constant curvature −1, 0 or 1 inducing the same conformal structure – every metric is conformally equivalent to a constant curvature metric. The surface X is called hyperbolic, parabolic, and elliptic, respectively.

The existence of these three types parallels the several non-Euclidean geometries.

The general technique of associating to a manifold X its universal cover Y, and expressing the original X as the quotient of Y by the group of deck transformations gives a first overview over Riemann surfaces.

By definition, these are the surfaces X with constant curvature +1. The Riemann sphere C ∪ {∞} is the only example. (Elliptic functions are examples of parabolic Riemann surfaces. The naming comes from the history: elliptic functions are associated to elliptic integrals, which in turn show up in calculating the circumference of ellipses).

By definition, these are the surfaces X with constant curvature 0. Equivalently, by the uniformization theorem, the universal cover of X has to be the complex plane.

There are then three possibilities for X. It can be the plane itself, an annulus, or a torus

The set of representatives of the cosets are called fundamental domains.

Care must be taken insofar as two tori are always homeomorphic, but in general not biholomorphic to each other. This is the first appearance of the problem of moduli. The modulus of a torus can be captured by a single complex number τ with positive imaginary part. In fact, the marked moduli space (Teichmüller space) of the torus is biholomorphic to the upper half-plane or equivalently the open unit disk.

The Riemann surfaces with curvature −1 are called hyperbolic. This group is the "biggest" one.

The celebrated Riemann mapping theorem states that any simply connected strict subset of the complex plane is biholomorphic to the unit disk. Therefore the open disk with the Poincaré-metric of constant curvature −1 is the local model of any hyperbolic Riemann surface. According to the uniformization theorem above, all hyperbolic surfaces are quotients of the unit disk.

Examples include all surfaces with genus g > 1 such as hyper-elliptic curves.

For every hyperbolic Riemann surface, the fundamental group is isomorphic to a Fuchsian group, and thus the surface can be modelled by a Fuchsian model H/Γ where H is the upper half-plane and Γ is the Fuchsian group. The set of representatives of the cosets of H/Γ are free regular sets and can be fashioned into metric fundamental polygons. Quotient structures as H/Γ are generalized to Shimura varieties.

Unlike elliptic and parabolic surfaces, no classification of the hyperbolic surfaces is possible. Any connected open strict subset of the plane gives a hyperbolic surface; consider the plane minus a Cantor set. A classification is possible for surfaces of finite type: those isomorphic to a compact surface with a finite number of points removed. Any one of these has a finite number of moduli and so a finite dimensional Teichmüller space. The problem of moduli (solved by Lars Ahlfors and extended by Lipman Bers) was to justify Riemann's claim that for a closed surface of genus g, 3g − 3 complex parameters suffice.

The geometric classification is reflected in maps between Riemann surfaces, as detailed in Liouville's theorem and the Little Picard theorem: maps from hyperbolic to parabolic to elliptic are easy, but maps from elliptic to parabolic or parabolic to hyperbolic are very constrained (indeed, generally constant!). There are inclusions of the disc in the plane in the sphere:

Continuing in this vein, compact Riemann surfaces can map to surfaces of lower genus, but not to higher genus, except as constant maps. This is because holomorphic and meromorphic maps behave locally like

so non-constant maps are ramified covering maps, and for compact Riemann surfaces these are constrained by the Riemann–Hurwitz formula in algebraic topology, which relates the Euler characteristic of a space and a ramified cover.

For example, hyperbolic Riemann surfaces are ramified covering spaces of the sphere (they have non-constant meromorphic functions), but the sphere does not cover or otherwise map to higher genus surfaces, except as a constant.

The isometry group of a uniformized Riemann surface (equivalently, the conformal automorphism group) reflects its geometry: