The majority of Marathi Christians are Protestants who found in small numbers in all over the Maharashtra Large numbers in Ahmednagar, Solapur, Aurangabad and Jalna, Yavatmal (Yeotmal). These are the only districts in Maharastra which has majority of Protestant Christians as compared to Roman Catholics.[1] They belong to the American Marathi Mission and The SPG Mission, Church Mission Society of Church Of England. Majority Christians in Western Maharashtra are Protestants, Roman Catholics are found in very small numbers especially at urban area, some of them are local converts and others are emigrants from Thane & Goa. The Marathi Roman Catholics and Protestants are more united with each other than with their co-religionists of other communities. The literacy rate is very high among Christians. They are well settled in Mumbai, Pune and Nasik areas. Many Marathi Christians have emigrated to other countries in the Anglosphere with significant populations being present in the United States, United Kingdom and Australia.

In Western Maharashtra Christians are Hindu and Muslim converts. In Western Maharashtra, Christians are a great result of American Marathi Mission and Church Mission Society, SPG Mission by Church of England.[2] British Missionary William Carey was instrumental in translating the Bible into Marathi language.[3] Some American Missionaries like laymen who aided the establishment of the Ahmednagar branch, the chief was Dr. Graham then in medical charge of the Ahmednagar military Hospital, who procured for the mission, free use of the mansion Station known as Tewri Bagh, which was later used as Charitable dispensary called the Poor Asylum. Many People started to Convert from different caste and Religion. On 6th march 1832 the Mansion was organized as an independent church. Brahman and other high class Hindus who had converted to Christianity of whom could read and write were employed as Catechist or Bibleman. After that the mission opened a boy's and girl's boarding school for Christian & Hindu Students.

Church Mission Society the mission of Church of England for Propagating the Gospel was started in 1873, 40 years after the American Marathi mission Started, on the suggestion of the Rev. W. Boswell the chaplain of the area. After which the number of converts gradually increased and during the year 1882 more people were Baptized and Evangelized. [4] 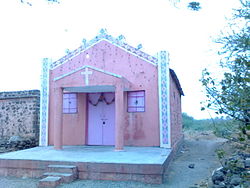 Ahmednagar has more number of Christians, majority of them are Protestants & Belongs to different Denominations, Largest Denomination is Church of North India. The Percentage of Christian Population in Ahmednagar, as recorded in the Census of 1881 in the old Gazetteer, was only 0.64% whereas it went up to 2.49% in 1901 and 2.72% in 1961 and in 2000 it increased to 10%. The followers of the American Marathi Mission found all over the Ahmednagar district except in the south-west. Every village has one or more resident families as Christian and every village has its own church for worship. Most of the people kept their names and surnames, but in naming their children they generally prefer English to Indian names but some also prefer Indian names. Christians from Ahmednagar form one community and marry only within the district, but Brahmin and other High class Converts are averse from marrying with families who originally were lower castes, Caste system still prominent in local Christian only in subject of marriage. In home, family prayers are done once in a day, who can read, read a passage from the Bible and hymn sings. The whole community has to attend Church on Sunday, Besides the Sunday meeting they hold prayer meetings on some week day when they pray together and exhort and encourage each other. Significant Marathi Christians are found in Eastern part of Ahemdnagar.[5]

Christians Found all over the Nasik who are 0.13 % of the population. The only Christian village is Sharanpur or the City of Refuge, which was founded by the Rev. W.S. Price of the Church Mission Society in 1854. After setting a Missionary Home in 1879, some people from different religion like Brahman, Kunbi, Goldsmith and Many from Lower caste baptized. In Connection with Sharanpur an asylum which was started in Bombay in 1853, of freed African Slaves was established in 1860 at the expense of Government, between 1874 many African were received and taught to read and write Marathi and English. In 1874 the Asylum was broken up, and the inmates were sent back to their native country for form a Christian village at Mombasa.[6]

According to the 1951 Census the Christian Population of the district was 37,243 which includes Europeans, Anglo-Indian, and Roman Catholics and Protestants. However owing to the withdrawal of the Britishers and emigration of Europeans and Anglo-Indian, the Christian Community in the district is now almost Indian, and governed to a great extent by Indian priest and Pastors. of Roman Catholics, about one-half are of Goan origin, the first batch of Goan Christians are said to have come to Poona to join as gunners in the Maratha army, they were given a plot of land to build their quarters in khadak. The Roman Catholic Diocese of Pune is a diocese located in the city of Pune. And Church of North India Diocese also located in Pune. Christians live mostly in pune city, but there are small colonies of them, mostly employed in the railway.[7] Christianity arrived in the 18th century when the British took over the area From the Maratha Empire, at that time American missionary were First to start Evangelize the local people. There are several Churches in Pune

The Vineyard is most popular place in Dapoli Near Pune for Christian worship. Many people from different religion comes to attend prayer meetings in Vineyard. The Pandita Ramabai Mukti Mission at Kedgaon is well known for the Pioneer work for the emanicipation of Hindu widows.

Solapur Christians some are Migrants from Goa and Manglore and some Native who are mostly Evangelized of the American Marathi Mission. The mission began its work in 1862. Missionaries preached to the many people and many converts are found from Brahaman, higher class and lower casts. They do not differ in food, and culture from Ahmednagar Christians. There is close connectin between solapur and Ahmednagar Christians. [9]

The American Free Methodist church maintains missions at,Yavatmal, Wun(now Wani),Umri (Christian Hospital),Rajur (Now Rajur Colliery) and Darwah, Many Converts are from Lower caste but include other caste like Brahman, and other high castes. [10]

There are similarities of customs and culture between Hindus and Marathi Christians, such as dress, food and cuisine. The Hindu custom of wearing a mangalsutra and placing bindis is still prominent among native Christians. Putting turmeric on bride and bride groom's body before day of marriage which is Hindu custom still followed by Marathi Christians. Other religious traditions are much the same as elsewhere.

In Maharashtra, the great Marathi poet Narayan Wamanrao Tilak realised that a Hindu-Christian synthesis was simply not possible unless the Christian religion had deep roots in the Indian culture. He trained the Marathi Christians to worship and sing Bhajans and Kirtans. He showed Christian faith in a genuinely Indian way.[11]

Haregaon village in Shrirampur taluka of Ahmednagar district, it is set to receive thousands of devotees on the occasion of the annual 'yatra' (feast) of the 'Matmauli', the Blessed Virgin Mary on September 7 & 8. Haregaon is often described as the pandharpur of the Marathi-speaking Catholics in the state as nearly four lakh devotees from Ahmednagar, Pune, Nasik, Aurangabad[1] districts and Mumbai attend the 'Matmauli yatra' every year to celebrate the birthday of the mother of Jesus Christ. The Jesuit priests in the small village had started the feast in 1949.