Margaret of Valois (French: Marguerite de France, Marguerite de Valois, 14 May 1553 – 27 March 1615) was Queen of France and of Navarre during the late sixteenth century. A royal princess of France by birth, she ultimately became the only surviving member of the Valois Dynasty.

She was the daughter of King Henry II of France and Catherine de' Medici and the sister of Kings Francis II, Charles IX and Henry III and of Queen Elizabeth of Spain. She was queen twice for she had married King Henry III of Navarre who finally became King Henri IV of France.

Margaret, among other political manipulations, was subjected to an arranged marriage and being held prisoner (albeit at a castle) for many years. However, her life was anything but passive.

Aside from being twice a queen—first of Navarre (1572), then of France (1589), Margaret was famous for her beauty and sense of style (she was one of the most fashionable women of her time, influencing most of Europe's Royal Courts with her clothing). She was also a gifted poet and writer, notable for both her own scandalous behavior and for revealing that of others. Margaret took many lovers both during her marriage and after her annulment. The most well-known were Joseph Boniface de La Môle, Jacques de Harlay, Seigneur de Champvallon and Louis de Bussy d'Amboise. When imprisoned by her brother Henry III for eighteen years, she took advantage of the time to write her memoirs, which included a succession of stories relating to the disputes of her brothers Charles IX and Henry III with her husband Henry IV. The memoirs were published posthumously in 1628 and scandalised the population.[citation needed]

Her life has inspired a variety of stories over the centuries, beginning with Shakespeare's early comedy Love's Labour's Lost written during her lifetime, to Alexandre Dumas, père's 1845 novel La Reine Margot; to a 1994 movie La Reine Margot. 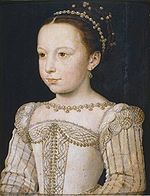 The young Margaret of Valois, by François Clouet, c. 1560

Margaret was born Marguerite de Valois on May 14, 1553, at the royal Château de Saint-Germain-en-Laye, the sixth child and third daughter of Henry II and Catherine de' Medici. Three of her brothers would become kings of France: Francis II, Charles IX and Henry III. Her sister, Elisabeth of Valois, would become the third wife of King Philip II of Spain. 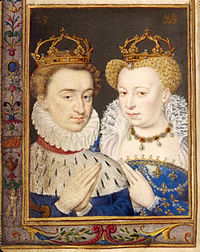 Henry of Navarre and Marguerite of Valois 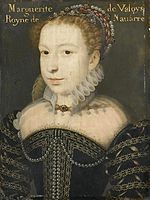 Although Margaret is said to have loved Henry of Guise, her mother would never allow the House of Guise any chance of controlling France. Instead, she offered to marry Margaret to Philip II's son Carlos, Prince of Asturias, but the marriage never occurred. Serious negotiations for Margaret's marriage to King Sebastian of Portugal were also considered but abandoned.

Ultimately Margaret was forced to marry King Henry III of Navarre, who ultimately succeeded to her brothers as Henry IV of France (from this marriage, she was also the Duchess of Vendôme), the son of the Protestant queen Jeanne III of Navarre and of the First Prince of the Blood Antoine de Bourbon,[1] in a union that was designed to reunite family ties (the Bourbons were part of the French Royal family and the closest relatives to the reigning Valois branch) and create harmony between Catholics and the Protestant Huguenots. Henry's mother opposed the marriage, but many of her nobles supported it, so the match was made.

However, Jeanne died under suspicious circumstances before the marriage could take place; some suspected that a pair of gloves sent to Jeanne as a wedding gift from Margaret's mother, Catherine de' Medici had been poisoned.[2] The marriage of the 19-year-old Margaret to Henry, who had become King of Navarre upon the death of his mother, took place on 18 August 1572 at Notre Dame cathedral in Paris. The groom, a Huguenot, had to remain outside the cathedral during the religious ceremony.

Just six days after the wedding, on Saint Bartholomew's Day, Roman Catholic factions instigated a targeted group of assassinations, followed by a wave of mob violence, both directed against the Huguenots (French Calvinist Protestants). Traditionally believed to have been instigated by Catherine de' Medici, the marriage was an occasion on which many of the most wealthy and prominent Huguenots had gathered in largely Catholic Paris.

This event took place during the period 1562 to 1598, known as the French Wars of Religion, which consisted of factional disputes between the aristocratic houses of France, such as the House of Bourbon and House of Guise (Lorraine).

After the Saint Bartholomew's Day massacre

Margaret has been credited with saving the lives of several prominent Protestants, including her husband's, during the massacre, by keeping them in her rooms and refusing to admit the assassins. Henry of Navarre had to feign conversion to Catholicism. 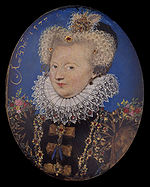 After more than three years of confinement at court, Henry escaped Paris in 1576, leaving his wife behind. Finally granted permission to return to her husband in Navarre, for the next three and a half years Margaret and her husband lived in Pau. Both openly kept other lovers, and they quarrelled frequently.

After an illness in 1582, Queen Margaret returned to the court of her brother, Henry III, in Paris. But Henry III was soon scandalized by her reputation and forced her to leave the court. After long negotiations, she was allowed to return to her husband's court in Navarre, but she received an icy reception. Determined to overcome her difficulties, Queen Margaret masterminded a coup d'état and seized power over Agen, one of her appanages. After several months of fortifying the city, the citizens of Agen revolted and Queen Margaret fled to the castle of Carlat. In 1586, she was imprisoned by her brother Henry III in the castle of Usson, in Auvergne, where she spent eighteen years.

During this time, Margaret wrote her memoirs consisting of a succession of stories relating to the affairs of her brothers Charles IX and Henry III with her former husband Henry IV. The memoirs were published posthumously in 1628 and scandalised the population.

In 1589, Henry, her husband, succeeded to the throne of France as Henry IV. He was, however, not accepted by most of the Catholic population until he converted four years later. Henry continued to keep mistresses, most notably Gabrielle d'Estrées from 1591 to 1599, who bore him four children. Negotiations to annul the marriage were entered in 1592 and concluded in 1599 with an agreement that allowed Margaret to maintain the title of queen. 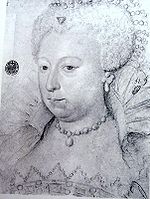 She settled her household on the Left Bank of the Seine, in the Hostel de la Reyne Margueritte that is illustrated in Mérian's 1615 plan of Paris (illustration); the hostel was built for her to designs by Jean Bullant in 1609. It was eventually demolished and partially replaced in 1640 by the Hôtel de La Rochefoucauld.[3]

Reconciled to her former husband and his second wife, Marie de' Medici, Queen Margaret returned to Paris and established herself as a mentor of the arts and benefactress of the poor. She often helped plan events at court and nurtured the children of Henry IV and Marie.

Margaret died in her Hostel de la Reyne Margueritte, on 27 March 1615, and was buried in the funerary chapel of the Valois in the Basilica of St. Denis.[4] Her casket has disappeared and it is not known whether it was removed and transferred when work was done at the chapel, or destroyed during the French Revolution.[5]

L'Hostel de la Reine Marguerite built by Jean Bullant in 1609, and its gardens, as shown in Matthäus Merian 1615 plan of Paris.

Margaret of Valois in literature & fiction

Alexandre Dumas, père's 1845 novel La Reine Margot is a fictionalised account of the events surrounding Margaret's marriage to Henry of Navarre. The novel was adapted into a 1994 French film, La Reine Margot, in which the role of Margaret was played by the popular French actress Isabelle Adjani. The main action of Shakespeare's early comedy Love's Labour's Lost (1594–5) is based on an attempt at reconciliation, made in 1578, between Margaret and Henry.

La Reine Margot appears in Jean Plaidy's novel, Myself, My Enemy a fictional memoir of Queen Henrietta Maria, consort of King Charles I of England. A chance meeting between the young princesse Henriette and the elderly reine Margot at the celebration of marriage of Henriette's brother, Louis XIII of France, and Anne of Austria, hints to the reader about the fascinating character that Margaret of Valois was.

Margaret of Valois also has a major role in the Meyerbeer opera Les Huguenots. This was one of Joan Sutherland's signature roles and she performed it for her farewell performance for the Australian Opera in 1990.