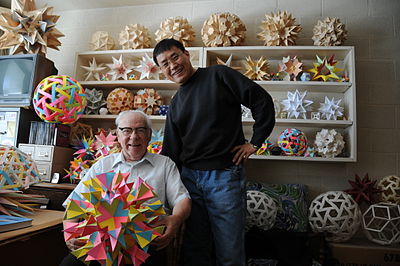 Born to German immigrants in Park Falls, Wisconsin, Joseph Wenninger always knew he was going to be a priest. From an early age, it was understood that his brother Heinie would take after their father and become a baker, and that Joe, as he was then known, would go into the priesthood.

When Wenninger was thirteen, after graduating from the parochial school in Park Falls, Wisconsin, his parents saw an advertisement in the German newspaper Der Wanderer that would help to shape the rest of his life. The ad was for a preparatory school in Collegeville, Minnesota, associated with the Benedictine St. John’s University.

While admitting to feeling homesick at first, Wenninger quickly made friends and, after a year, knew that this was where he needed to be. He was a student in a section of the prep school that functioned as a “minor seminary” – later moving on into St. John’s where he studied philosophy and theology, which led into the priesthood.

When Fr. Wenninger became a Benedictine monk, he took on his monastic name Magnus, meaning “Great”. At the start of his career, Wenninger did not set out on a path one might expect would lead to his becoming the great polyhedronist that he is known as today. Rather, a few chance happenings and seemingly minor decisions shaped a course for Wenninger that led to his groundbreaking studies.

Shortly after becoming a priest, Wenninger’s Abbot informed him that their order was starting up a school in the Bahamas. It was decided that Wenninger would be assigned to teach at that school. In order to do this, it was necessary that he get a Masters degree. Wenninger was sent to the University of Ottawa, in Canada, to study educational psychology. Once he arrived, he discovered that almost all of the courses that interested him were taught solely in French. However, there was one professor, Thomas Greenwood, in the philosophy department who was willing to teach him a course in English. The course was in symbolic logic and led to Wenninger’s thesis subject: “The Concept of Number According to Roger Bacon and Albert the Great”.

After completing his degree, Wenninger went to the school in the Bahamas, where he was asked by the headmaster to choose between teaching English or math. Wenninger chose math, since it seemed to be more in line with the topic of his MA thesis. However, not having taken many math courses in college, Wenninger admits to being able to teach by staying a few pages ahead of the students. He taught Algebra, Euclidean Geometry, Trigonometry and Analytic Geometry.

After ten years of teaching, Wenninger felt he was becoming a bit stale. At the suggestion of his headmaster, Wenninger attended the Columbia Teachers College in summer sessions over a four year period in the late fifties. It was here that his interest in the “New Math” was formed and his studies of the polyhedra began.

Wenninger’s first publication on the topic of polyhedra was the booklet entitled, “Polyhedron Models for the Classroom”, which he wrote in 1966. After this, he spent a great deal of time building various polyhedra. He made 65 of them and had them on display in his classroom. At this point, Wenninger decided to contact a publisher to see if there was any interest in a book. He had the models photographed and wrote the accompanying text, which he sent of to Cambridge University Press in London. The publishers indicated an interest in the book only if Wenninger built all 75 of the uniform polyhedra.

That was a mighty big “if”, but Wenninger did complete the models, with the help of R. Buckley of Oxford University who had done the calculations for the snub forms by computer. This allowed Wenninger to build these difficult polyhedra with the exact measurements for lengths of the edges and shapes of the faces. This was the first time that all of the uniform polyhedra had been made as paper models. This project took Wenninger nearly ten years, and the book, Polyhedron Models, was published by the Cambridge University Press in 1971, largely due to the exceptional photographs taken locally in Nassau.

From 1971 onward, Wenninger focused his attention on the projection of the uniform polyhedra onto the surface of their circumscribing spheres. This led to the publication of his second book, Spherical Models in 1979, showing how regular, or semiregular, polyhedron can be used to build geodesic domes. He also exchanged ideas with other mathematicians, Hugo Verheyen and Gilbert Fleurent.

In 1981, Wenninger left the Bahamas and returned to St. John’s Abbey. His third book, Dual Models, appeared in 1983. The book is a sequel to Polyhedron Models, since it includes instructions on how to make paper models of the duals of all 75 uniform polyhedra.