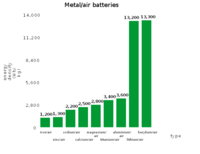 The types of metal–air batteries have different capacities

Of the various metal–air battery chemical couples (Table 1), the Li–air battery is the most attractive since the cell discharge reaction between Li and oxygen to yield Li2O, according to 4Li + O2 → 2Li2O, has an open-circuit voltage of 2.91 V and a theoretical specific energy of 5210 Wh/kg. In practice, oxygen is not stored in the battery, and the theoretical specific energy excluding oxygen is 11140 Wh/kg (40.1 MJ/kg). Compare this to the figure of 44 MJ/kg for gasoline (see petrol energy content).