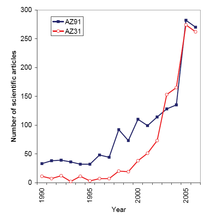 Figure 1: Number of scientific articles which have terms AZ91 or AZ31 in the abstract.

Magnesium alloys are mixtures of magnesium with other metals (called an alloy), often aluminium, zinc, manganese, silicon, copper, rare earths and zirconium. Magnesium is the lightest structural metal. Magnesium alloys have a hexagonal lattice structure, which affects the fundamental properties of these alloys. Plastic deformation of the hexagonal lattice is more complicated than in cubic latticed metals like aluminum, copper and steel. Therefore magnesium alloys are typically used as cast alloys, but research of wrought alloys has been more extensive since 2003. Cast magnesium alloys are used for many components of modern cars, and magnesium block engines have been used in some high-performance vehicles; die-cast magnesium is also used for camera bodies and components in lenses.

Magnox (alloy), whose name is an abbreviation for 'magnesium non-oxidising', is 99% magnesium and 1% aluminium, and used in the cladding of fuel rods in some nuclear power stations.

Magnesium alloys tend to be referred to by short codes (defined in ASTM 275) denoting the approximate chemical composition by weight: for example, AS41 has 4% aluminium and 1% silicon; AZ81 is 7.5% aluminium and 0.7% zinc. If aluminium is present, manganese is almost always also there at about 0.2% by weight to improve grain structure; if aluminium and manganese are absent, zirconium is usually present at about 0.8% for the same purpose.

Magnesium wrought alloy proof stress is typically 160-240 MPa, tensile strength is 180-440 MPa and elongation is 7-40%. The most common wrought alloys are:

The thorium-containing alloys tend not to be used since a thorium content of more than 2% means a component has to be handled as a radioactive material.

Magnesium alloys are used for both cast and forged components, with the aluminum-containing alloys usually used for casting and the zirconium-containing ones for forgings; the zirconium-based alloys can be used at higher temperatures and are popular in aerospace. Magnesium+yttrium+rare-earth+zirconium alloys such as WE54 and WE43 (the latter with composition Mg 93.6%, Y 4%, Nd 2.25%, 0.15% Zr) can operate without creep at up to 300C and are reasonably corrosion-resistant.

Scandium and gadolinium have been tried as alloying elements; an alloy with 1% manganese, 0.3% scandium and 5% gadolinium offers almost perfect creep resistance at 350C.[2] The physical composition of these multi-component alloys is complicated, with plates of intermetallic compounds such as Mn2Sc forming. Erbium has also been considered as an additive.[3]

Adding 10% of lithium to magnesium produces an alloy which can be used as an improved anode in batteries with a manganese-dioxide cathode.[4] Magnesium-lithium alloys are generally soft and ductile, and the density of 1.4 is appealing for space applications.