Sentosa Musical Fountain, also known as the Magical Fountain of Sentosa, is a musical fountain that was located at a now-demolished part of Imbiah Lookout. This fountain was officially opened in 1982 and it ceased operations on 25 March 2007. It could accommodate more than 5000 people. The 7 seating zones in the arena were themed after the colors of the rainbow. It hosted three different shows through the five decades it had been in operation, including the Magical Sentosa show.

Part of the area where the fountain once stood is now where the Lake of Dreams, Hotel Micheal and Crockford Tower are located. The pool of the former musical fountain is marked by a fountain located at the main entrance to Resorts World Sentosa. Sentosa Musical Fountain was eventually replaced by another fountain entitled Songs of the Sea.

The Musical Fountain first opened its gates in 1982. During its last upgrading works, the fountain's renovation is strongly based on neoclassical architecture, especially the era's heavily decorated arches. The design of the fountain was also themed to look like a nature wonderland, with small ponds, trees, shrubs and a gigantic man-made waterfall being constructed around the fountain's area.

After operating for 25 years, the Musical Fountain staged its last Magical Sentosa show on 25 March 2007. It was shut down to make way for Singapore's integrated resort Resorts World Sentosa, which would occupy the area.

Sentosa Musical Fountain was the venue for a gala dinner held in conjunction with the World Trade Organisation Ministerial Conference in 1996. It was also one of the hosting venues for the 2004 Singapore Youth Festival. 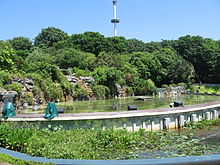 Another view of the fountain. Note the draped spotlights in green cloth. These were formerly used for shows in the 1980`s and 90's, and they built by Laservision.

The Government of Singapore decided to develop of a plot of land on the then-named Puala Blakang Mati (now know as Sentosa island) for entertainment purposes. After the Sentosa Development Corporation was created, one of their major plans for the island was to build a musical fountain. This fountain would be located at the North-West of the island.

The Sentosa Musical Fountain required 10 years to build, at a cost of more than US$1,000,000. In 1982, the fountain was officially opened as part of Sentosa's grand opening. In 1992, the cooperation decided that extra features like a Sentosa logo that was drawn onto a large wooden plank, ponds, a symphony stage, and renewed water jets would be added.

In 1996, after the Merlion was added as a new attraction of Sentosa, an idea was raised to install LED laser beams in the Merlion's eyes, with the intention that laser would be part of the musical fountain's show. As such, they hired Laservision to make a major upgrade to the fountains and build in laser lights. These laser lights are strong enough to be seen from 2 miles away. After this upgrade, visitors are not allowed to access the Merlion tower after 7pm due to laser radiation, blinding and other safety concerns.

In 1999, the fountain undergone a two-year major restoration project by ECA2. After the restoration, the wooden plank with the Sentosa logo was changed to a plaster sculpture due to termite infestation. It was also used as a prop for the Magical Sentosa show. In addition, the seats in the fountain's gallery were repainted to resemble the seven colours of a rainbow. The lasers installed previously were also draped in green clothes. 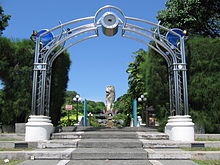 The main gates of the musical fountain.

The musical fountain pool contained of 25 million gallons of water, which took 3 man-hours to fill it up completely. The fountain could also from more than 19 different water formations, including the famous formation of a phoenix being flanked by waltzing chorus-lines. Water jets in the fountain were able to shoot water up to a height of 20 meters.

The "O" in the "SENTOSA" plaster sculpture led to a dressing room hidden inside the man-made waterfall. Cast members of the show entered and exited through this door.

During the 80's the fountain display show was inspired by the synchronized dance of the Fountains of Bellagio. A rare archived 3 minutes and 36 seconds of the original show footage [1] can be found on Youtube.

In a behind-the-scene video, it was revealed that cast members who performed as the Spirits of Sentosa were filmed as they posed in a bathtub. The story tells of the three Spirits of Sentosa who had their crystal ball stolen by a dragon. The dragon wanted to use the crystal ball for its own benefits. The three sprits went on a journey to recover it with the help from a Wizard. 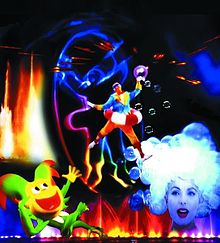 A scene from the Magical Sentosa show

This was the last show staged on the fountain. The show was created in 2000, when Yves Pepin (designer of the Songs of the Sea) decided that he should design a show that suits Imbiah Lookout's theme of fantasy. After the restoration of the fountain, engineers started installing new equipment to create an all-new nighttime show that placed Kiki the Hyperactive Monkey, the official mascot of Sentosa island, as the host. It was also the first time that viewers were able to see him in CGI.

Songs of the Sea

Main article: Songs of the Sea

As the Musical Fountain ceased operations in 25 March 2007 to make way for the development of Resorts World Sentosa,[1] a new musical fountain was introduced.

Due to the lack of resources, the history of this fountain, videos and footages are posted throughout the internet. These give evidence to the fountains's key events and happenings. Some of these included scores of the Magical Sentosa soundtrack, which were never released for distribution by ECA2.

The long-lost High-definition trailer of the Magical Sentosa show was recently rediscovered on ECA2's official website. The high-fidelity audio in the video enables one to hear Kiki singing "In the groove!", a line from the song Is my World.

This video shows this fountain's displays from the 1980s.

This video shows Laservision™ going behind the scene of Spirits of Sentosa.

The video covers the first 51 seconds of the show, with the full and muted soundtrack of In Sentosa included.

This record is the only existing sample of the Water Waltz score from the Magical Sentosa Soundtrack.