Magic Mansion is an American sitcom that broadcast on the AFRTS television network from January 8, 1965, until June 1, 1968.[1][2][3] Its weekly programs were televised live before a studio audience.[4][5] The sitcom was transitional for television because it was one of the last live non-variety show broadcasts and one of the first to use the new medium of videotape.[6][7] Air Force Staff Sergeants James Mortensen and David Castle created the show for family audiences in the United States Pacific Command (USPACOM).[6][8] It starred Warren Chaney, Harriett Zorich, Jerry Jacobson, Earle Klay and Vincent Rizutto.[9][10][11] Sgt. Mortensen produced the sitcom, which was written and directed by US Army Captain (OF-2) Warren Chaney.[12] The music for the show's theme song was written by Corporal Larry Edisen. A multiple-camera setup format employing three cameras and a studio audience was used during production.[6][13] 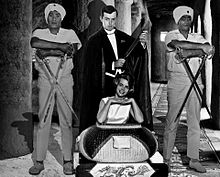 The main setting for the show was the Magic Mansion, a large rambling manor with unending rooms and secret passages. Although created independently of each other, Hollywood's Magic Castle had a similar themed premise of magic.[14] Unlike Disney's Haunted Mansion (which opened in 1969), Magic Mansion was absent of ghosts, goblins or other haunted visitors.[15] However the show did display a comradship with fellow magicians making guest appearances as did London, England's The Magic Circle. The program would frequently use time at the end of a broadcast to teach viewers a feat of magic or illusion.[16] The AFRTS created world for Magic Mansion was populated with magic, illusions, mystery and strange comedic characters as had been Paul Winchell's ventriloquist world in The Paul Winchell Show or Mark Wilson's magical kingdom in The Magic Land of Allakazam.[17]

The show’s lead known only as The Magician was portrayed by real-life magician/ventriloquist, Warren Chaney. Chaney worked with two ventriloquist dummies, Danny O’Kaye and Bedford Bulkley, both of whom were treated as real children during the production. Feats of legerdemain and stage magic were prominent in the programs but as with the show's ventriloquism, served only as a backdrop for the sitcom’s plot lines and stories.[18][6][10] 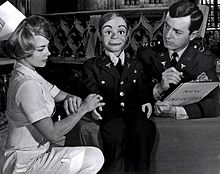 Assisting the Magician was Harriett (Harriett Zorich), the Mansion’s chief organizer and scheduler[9] and Lounsberry the Clown (Jerry Jacobson). Lounsberry was a bumbling slapstick jester based upon a combination of Barnum and Bailey's Emmett Kelly and comedian, Harpo Marx. Like Marx and Kelly, Lounsberry never spoke but worked in pantomime. Rathmore (Earle Klay), a seven-foot lumbering Frankenstein like creature was the chief Mansion servant. Unlike the original monster, Rathmore was kind, considerate and though often confused, had a sense of humor.[19] Within months of each other, similar characters were introduced to American audiences half way around the globe as Herman Munster[20][21] and The Addams Family.[22] The three shows, created independent of each other, had one factor in common. They lasted two seasons and closed within months of the other.[2][21][23]

Danny O’Kaye and Bedford Bulkley, the two ventriloquist figures appearing on the programs were obviously dummies, but were portrayed as real. The series often used a small child resembling Danny or Bedford to provide on-camera mobility.[24] Danny was the wisecracking kid, forever causing trouble and disrespecting anyone in authority. Bedford (the other figurer) was the country bumpkin fool, never quite understanding and always shades dimmer than those around him. 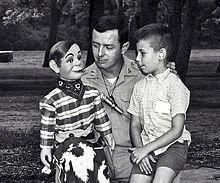 Wappy the Magic Genii (Vince Rizutto) was a recurring magic lamp genii who could never remember who wished for what much less grant the wishes correctly. Cast members (most often Chaney and Rizutto) frequently donned makeup and various costumes to portray different characters on the show. Chaney did portray one reoccurring character, Professor Zibazabazobitip, a nutty scientist who’s very essence personified the stereotype of the absent-minded professor.

Magic Mansion broadcast during the Vietnam war years when hundreds of thousands of US troops were stationed throughout the United States Pacific Command in order to support ongoing combat operations.[25] Military families were frequently stationed along side their spouses in nearby countries like Okinawa, Japan, Thailand, and the Philippines, etc. Hence, there was a need for original family programming. Celebrities touring the military bases in the pacific would seldom hesitate to make an appearance on the show. Guests making special appearances included Bob Hope, Patti Page, Danny Kaye, Guy Mitchell and John Wayne. Well-known magician Tony Slydini and ventriloquist, Peter Rich appeared in several episodes performing their specialties for the Magic Mansion skits.[26][27]

The series was considered a trailblazer for the Armed Forces Radio and Television Services because of its reach beyond regular broadcast venues.[28][29] As one of the last sitcoms to broadcast live and one of the first to transition to videotape, Magic Mansion also became one of the last shows to produce fifty broadcasts a year.[30]

Members of the cast dedicated to the entertainment of US military personnel and their families frequently entertained at military bases, organizations and clubs throughout Europe and Asia.[12] Skits from the broadcast were often recreated to the delight of children from military families stationed at overseas bases and outposts. Since the broadcasts were live, family audiences were invited. Chaney would perform prior to the broadcasts as a warm-up comedian for the audiences and following the show, would spend time with the families and children, thanking them for attending.[31]

The AFRTS KEN network had been searching for a children’s broadcast because of the high numbers of American families stationed overseas with their families during the Vietnam wartime years. Warren Chaney had received considerable press for his winning performance in the Pacific All-Army contests and later tour through Asia and Europe.[3] He was brought into the KEN studios at the Kadena Air Base to do a one time show which, unknown to him, was an audition.[32] The week following, Magic Mansion went into the planning stages with Chaney signed on as the show's lead and later as its writer and director.[33][12] 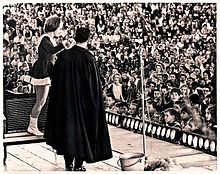 Executive Producer, Air Force Staff Sergeant James Mortensen, liked the concept but felt that the show needed a live audience. He also wanted to add a clown as part of the regular cast. The idea of a friendly Frankenstein-like monster was Chaney’s. Originally, the show’s Co-Producer David Cameron, acted the role of Rathmore but was later replaced by Army Captain, Earl Klay. Klay and Chaney were long time friends and had roomed together during an earlier military assignment in Atlanta, Georgia.[6][34]

The series frequently traveled to distant locations to film 16mm footage that was later incorporated into future shows. In a first season episode #25, Chaney performed his version of the famous Indian Rope Trick in front of Agra, India’s Taj Mahal.[35][36][37]

The show’s costar Army nurse, 1st Lieutenant Harriett Zorich,[9] never received production credit billing but contributed heavily to the program. In a press interview in 1985, Chaney said, “I always thought she was the working backbone of the show and much of the success of the program goes to her. Harriett not only worked production, she was costumes, makeup and production coordinator.”[33][38] 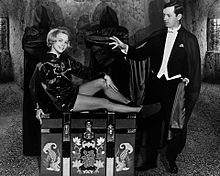 Magic was used as a backdrop for the Magic Mansion sitcom series. However, large illusions were often incorporated in the series story lines. Series stars Warren Chaney and Harriett Zorich appear in episode 57, Rathmore’s Magic Trunk.

Chaney wrote all of the scripts for the Magic Mansion one-hour broadcasts during its entire run.[39][11][10] In an Entertainment Journal interview, Chaney said, “I did it because it had to be done. I wrote the show on a Monday and Tuesday. We would rehearse individually on Friday and I would rewrite overnight. Early Saturday morning we had a dress performance and at 10 PM broadcast live. No one ever told us that this couldn’t be done and frankly, I was young and never knew any better.”[33][30]

Magic Mansion was produced on as estimated weekly budget of $25,000 per episode.[40]

Magic Mansion was a live performance broadcast in and near a wartime theatre of operations.[3] It was a transitional show for television in that it was one of the first television shows to move from live broadcast media to the newly invented composite U-matic system[41][42][43] Shortly afterwards, it shared in another first. Because videotape could be rebroadcast, the number of shows could be dropped from fifty a year to twenty-eight.[30] As a consequence, the show became one of the last television series to broadcast fifty programs a season and because of the number of episodes produced, one of the longest running productions of its time.[44][45]

The show lampooned most current events of the time providing entertainment to adults as well as children. The show was an excellent vehicle for Chaney whose entertainment experience permitted him to carry out a double act as a ventriloquist, be mysterious as a magician or a straight man for guests on the show.[6]

It is difficult to determine the exact number of episodes of Magic Mansion that were produced. According to the military’s logs, the show’s production team originated around 120 episodes in a little over two seasons.[46] The episodes were live with the military producing early kinescopes of the show for distribution.[47] Videotape was used only during the final season but unfortunately, none of the show’s episodes survive.[30] Although the series broadcast its final episode in 1968, some fans continue to recall the series. James Packard of Net News Daily wrote, "Magic Mansion" was much more than a children's' show presented by the Armed Forces Radio & Television Network. It remains an important memory for many of the children of the Viet Nam era whose parents were stationed abroad."[48]. Roberta Sanchez reflected similar sentiments in a commentary on her formative years watching Magic Mansion, "I was eleven at the time and can remember our family laughing so hard that our sides hurt. The show was truly and hour of magic and fantasy for my two brothers and me."[49] David Cameron, who produced the series' 120 episodes, continued working in television production until his retirement.[50] In a 2011 online magazine article titled, The Mansion Closes, Cameron reminisced about the series and it's final days, "In the years that followed, I retired from the Air Force and spent the rest of my life in television production for many of the major networks. I always wanted to replicate the feeling that I had when we did that show but never did. When the doors on Magic Mansion closed they were shut. An era in pioneering television had passed."[51] 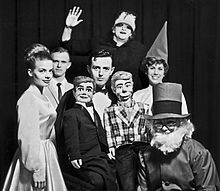 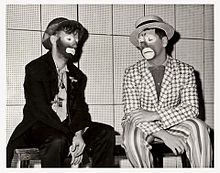 The Clowns of Magic Mansion; Lounsberry the Clown (Jerry Jacobson, right) rest during takes with fellow clown, Sammy A. Brooks

All but the last 45 episodes were filmed with live studio audiences.[6] The exact number of produced episodes is unknown inasmuch as the KEN studios at the Kadena U.S. Air Force base on Okinawa closed June 30, 2011 and military records before 1970 are unclear.[56] However, cast and crew recollections are close to the military records and it appears that approximately 120 shows were broadcast.[2][30]

During the final season, Sgt. Mortenson pushed to have the show filmed using newly developed color video cameras. However, owing to the high costs, this idea was rejected.[6][30] 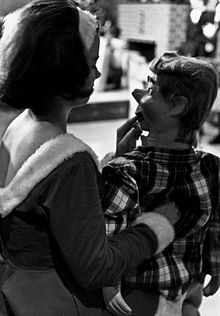