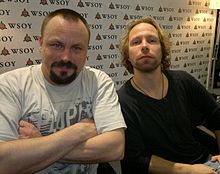 Madventures is a Finnish travel documentary television series that concentrates on backpacking in the most off-the-beaten-path destinations on the planet. It is presented by Riku Rantala and Tuomas "Tunna" Milonoff. As the show's director and cameramen, they travel around the world exploring different cultures. They emphasize that they are on a journey, not on a holiday. The show often features local practices that are culturally unacceptable or controversial where the episodes air, to the point where the showmakers have been accused of deliberate, excessive use of shock imagery.

The program's international premiere was in the United States on the Travel Channel on September 21, 2009. The United Kingdom premiere on Fiver is not yet decided. Originally the show premiered in Finland on the channel Sub, on October 13, 2002. Internationally, Madventures is distributed by the Target Entertainment Group.

The show is infamous for its "MadCook" section, in which the travelers attempt to eat some of the least favored dishes around the world — for example, monkey brains in the Amazon Rainforest and dog meat in Bali. Another light hearted feature are the waking up scenes, where Tuomas will often shock Riku while he is still asleep in bed, with hilarious results.

The travel documentary is made on a relatively low budget with no major production crew but rather just the two presenters traveling together with the shooting equipment.

Riku Rantala is the writer, presenter and producer of the series, while Tuomas "Tunna" Milonoff directs and films.[1]

The first two seasons were made in Finnish, but for international season three the show was sold to the Travel Channel and Fiver and the language was switched to English.[2] The third season began airing in Finland in early April 2009 with each episode being 10 minutes longer than the international version.

The series started as a gonzo documentary about the backpacking culture and the travel stories of the protagonists. The second season added a bit more social criticism to the mix whereas the third season concentrates on cultural and sociological extremes.

The following is a comprehensive list of Madventures episodes, excluding DVD extras. The original runtime of episodes was 50 minutes. For the second season the channel decided to halve the duration of episodes.

In 2002 the show received an Anti Animalia award[3] for their MadCook section from Animalia, Finland's largest[4] animal rights organization. Riku and Tunna strongly opposed Animalia's decision in public, calling it hypocritical and pusillanimous, as one of the story's points was to criticize western industrial farming. According to Madventures production team, they want to provoke and to create discussion about intolerance, neoconservatism and moralism.[5]

In 2005, the second season of Madventures was awarded with an Entertainment Special-Venla and two Media & Message awards in different categories.[6][7] In 2008 Riku Rantala was selected as the best male TV-person in the Kultainen TV (literally Golden TV) awards. In the same event Madventures won the best television programme of 2008 award. Both awards were decided in a vote by television viewers.

In January 2009 the hosts were selected as the Travel Persons of the Year by the Finnish Guild of Travel Journalists. The award, which has been given out since 1972, was presented in the Matka 2009 Nordic Travel Fair.[8][9]

All the seasons have been released on DVD with extras. Season 2 box set includes subtitles in English. Season 3 has two separate DVD boxes for English and Finnish viewers. Both boxes include over 4 hours of unaired footage.