Born in San Francisco, California, he worked at a variety of jobs but began his entertainment career as a vaudeville performer that led to the motion picture business. His sister Blanche married Samuel Goldwyn and in 1913 Lasky and Goldwyn teamed with Cecil B. DeMille and Oscar Apfel to form the Jesse L. Lasky Feature Play Company. With limited funds, they rented a barn near Los Angeles where they made Hollywood's first feature film, DeMille's The Squaw Man. Known today as the Lasky-DeMille Barn, it is home to the Hollywood Heritage Museum.

In 1916 their company merged with Adolph Zukor's Famous Players Film Company to create the Famous Players-Lasky Corporation.[2] In 1920, Famous Players-Lasky built a large studio facility in Astoria, New York, now known as the Kaufman Astoria Studios. In 1927, Lasky was one of the thirty-six people who founded the Academy of Motion Picture Arts and Sciences.

Financial problems arose within the industry as a result of the Great Depression and the Famous Players-Lasky Company went into receivership in 1933.[3] Jesse Lasky then partnered with Mary Pickford to produce films but within a few years she dissolved their business relationship. Lasky then found work as a producer at one of the big studios until 1945 when he formed his own production company. He made his last film in 1951 and in 1957 published his autobiography, I Blow My Own Horn. 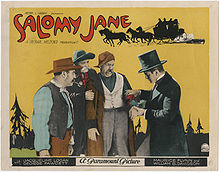 Lasky died in 1958 of a heart attack in Beverly Hills.[2][4] Lasky was interred in the Hollywood Forever Cemetery, adjacent to Paramount Studios, in Hollywood.

For his contribution to the motion picture industry, Lasky has a star on the Hollywood Walk of Fame at 6433 Hollywood Blvd. Lasky Drive in Beverly Hills was named in his honor.