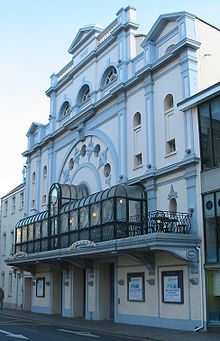 The Jersey Opera House is a working theatre and opera house in La Vingtaine de la Ville, Saint Helier, Jersey, Channel Islands.[1] The theatre building is administered by the States of Jersey but is managed by Jersey Opera House Limited. The current theatre director is Jasmine Hendry.[2]

The current building is a 1922 reconstruction (by Jesty & Baker) of the 1900 original building by Adolphus Curry (1848-1910), with additional extension facilities provided since. The façade has been described as "imposing and slightly Frenchified".[3]

In the 1920s the management started showing films, and this developed into a programme alternating cinema and live entertainment. When the Picture House, a cinema in Saint Helier, closed in April 1931, the Opera House became a cinema. It ran a regular cinema programme until the German Occupation. When the Germans arrived, there were three cinemas in operation in Jersey: the Forum (opened 1935), the Opera House, and Wests (opened 1909). The Forum, as the largest cinema, was commandeered by the Germans for entertaining the troops. The two remaining cinemas had a mere 32 feature films in stock to last during the Occupation. The Opera House and Wests arranged an alternating programme between themselves, so that a week of cinema was followed by a week of stage performance and that when the Opera House was staging a play,Wests was showing a film, and vice versa. The Opera House resumed its operation as a cinema after the Liberation, but closed as a cinema in 1959, reverting to a stage theatre.[4]

The building was formerly owned by Dick Ray.[5] In 1995 the public of the Island of Jersey became the new owner of the Jersey Opera House at a cost of £1.3 million. In January 1997 the theatre closed for a major restoration project. A proposition was presented to the States of Jersey for a loan of £5.5 million to add to the £1.5 million that had been raised by the good will of the people and businesses of Jersey. This was successful and this major programme of work started in August 1998. After an extensive programme of rebuilding and renovation the new theatre opened its door on the 9th July 2000 exactly 100 years to the day when the first Opera House had opened its doors to the public of Jersey.

The Jersey Opera House has had some financial difficulties in the past as well as periods when it did not operate.[6][7]

Its chandelier has 10,200 pieces and is carefully cleaned about every five years.[8]