In the spring of 1829, there were several fires in Jersey City (pop. 1,025) and public opinion demanded protection against fire. The Board of Selectmen listened to the demand but the city treasury did not have enough money for fire protection. There was also no way of raising the needed funds through a tax .

An ordinance was passed which prohibited public auctions unless the auctioneer was licensed. A total of $839.50 was collected from the licenses. This money was used to pay for the needed fire protection.

A committee was appointed to find out how much a fire engine would cost. The committee decided to order a new engine from Henry Ludlum of N.Y. for $800.00. It was delivered on August 28, 1829, along with 100 feet of hose purchased for $87.50. The next problem for the Selectmen was to organize and form a fire company. Any citizen could sign up and become one of the first firemen in Jersey City. Thirty citizens signed on. On September 21, 1829, Liberty Engine Company No. 1 was organized and the engine was placed in the stable of Hugh McCutcheon's "Farmers Hotel" at 42 York Street.[1]

The first Chief Engineer ( Chief ) of the fire department was Samuel Bridgart. He was appointed by resolution on February 5, 1835.

In 1870, the fire departments of Jersey City, Bergen City, and Hudson City consolidated under Chief Coyle. A volunteer force at the time was not adequate for such a large area. Because of this, the decision was made to organize a paid fire department. The working force for each company was uniformed, paid, and required to remain in the engine-house. A supplemental force known as "Buffaloes" was organized for each company . They were semi-volunteer and paid a small salary. Their duty was to respond to every alarm and perform the same fire duties as the full paid force.

From these small beginnings the Fire Department of Jersey City has grown into a professional fire department of the highest quality.

In early 2011, the Business Administrator reduced staffing to 20 fire companies and also had the arson duties transferred to the Police Department. In July 2011, the Jersey City Fire Department hired 63 new firefighters from a Federal grant that will pay all the new hires salaries and benefits for 2 years. In September 2011 the Fire Department staffing increased to 24 fire companies when the new firefighters graduated from the Morris County Fire Academy. 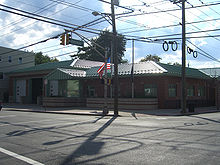 JCFD Fire Station # 14, located on the corner of Palisade Ave. and Congress St.