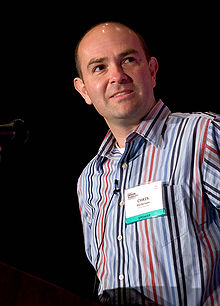 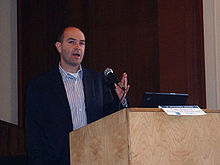 Chris Anderson (born 1961) is editor-in-chief of Wired, which has won a National Magazine Award for general excellence three times during his tenure. He wrote an article in the magazine entitled The Long Tail, which he expanded upon in the book The Long Tail: Why the Future of Business Is Selling Less of More (2006). He currently lives in Berkeley, California, with his wife and five children. He is the founder and chairman of BookTour.com and DIYDrones/3D Robotics.

Before joining Wired in 2001, he worked at The Economist, where he launched the magazine's coverage of the Internet. He has a degree in physics from George Washington University and did research at Los Alamos National Laboratory. He also has worked at the journals Nature and Science.

The Long Tail: Why the Future of Business is Selling Less of More, which appeared on the New York Times Nonfiction Best Sellers list, argues that products in low demand or that have a low sales volume can collectively make up a market share that rivals or exceeds the relatively few current bestsellers and blockbusters, if the store or distribution channel is large enough

His newest book, entitled Free: The Future of a Radical Price, which examines the rise of pricing models which give products and services to customers for free, was released on July 7, 2009, by Hyperion.[1][2]

Anderson generated controversy for plagiarizing content from the online encyclopedia Wikipedia in Free.[3] Anderson responded to the claim on his The Long Tail blog, stating that there were disagreements between him and the publisher over accurate citation of Wikipedia due to the changing nature of its content, leading him to integrate footnotes into the text.[4] Also on his blog, he took full responsibility for the mistakes and noted that the digital editions of Free were corrected. The notes and sources were later provided as a download on his blog.[5]

Regardless of the controversy, the $29.99 hard copy version of Free debuted as #12 on the New York Times Best Seller List.[6] It was also available as a free download for a limited time, and 200,000 to 300,000 digital versions were downloaded in the first two weeks.[7] The unabridged audiobook remains free, while the abridged version costs $7.49.[8]

In 2007, Mr. Anderson founded GeekDad, a do-it-yourself blog that became part of Wired.com. He acted as the editor until handing the title to Ken Denmead. Mr. Anderson now serves as editor emeritus of GeekDad.[9]

In October 2007, Anderson, who has been described as an "aerial-reconnaissance enthusiast," flew a remote-controlled aircraft allegedly equipped with a camera over Lawrence Berkeley National Laboratory, causing security concerns when the aircraft crashed into a tree.[10]

Anderson is currently preparing a new book which is based on his new article, "Atoms Are the New Bits", in a recent issue of Wired magazine. [11]