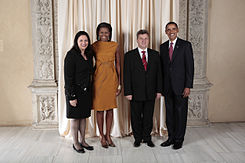 Ivanov finished primary and secondary school in his hometown of Valandovo. He lived there until the age of 27, then moved to the Macedonian capital Skopje, which has since been his permanent residence.[1]

His professional career kicked off in 1988, when he became an editor at Macedonian Radio and Television, the national broadcasting station. He later taught political theory and political philosophy at the Law Faculty in Skopje. In 1999, he became a visiting professor for the Southeast European programme at the University of Athens in Greece.[2]

A series of academic appointments followed, including at universities in Bologna and Sarajevo. Sts. Cyril and Methodius University named him associate professor in 1992 and full professor in 2008. The same year, he became president of the Council for Accreditation in Higher Education in Macedonia.[2]

Ivanov has been politically active since the Yugoslav era, when he pushed for political pluralism and a market economy. He is the founder and honorary president of the Macedonian Political Science Association and one of the founding members of the Institute for Democracy Societas Civilis, a leading analytical centre in Macedonia.[2]

Until 1990 he was an activist in the League of Socialist Youth of Yugoslavia and a member of the last presidency of the organization,[1] where he worked on reforming the political system and promoting political plurality and free market economy.[3]

Ivanov is considered a leading expert on civil society, specializing in political management.[2]

In the first round of the 2009 Macedonian presidential election 343,374 (35.06%) citizens of the Republic of Macedonia voted for Ivanov, the second being the candidate of the Social Democrats, Ljubomir Frčkoski, with 20.45% of the votes.[7]

Ivanov won the second round of the presidential election with 453,616 votes; opposition candidate Ljubomir Frčkoski got 264,828 votes.[8]

One day after his election, Ivanov reaffirmed his intention for a meeting to be realized between him and the president of Greece, Karolos Papoulias. He added that he will officialize his invitation just after taking office.[9] After a meeting with the president of the Democratic Union for Integration, Ali Ahmeti, Ivanov announced that he will also include ethnic Albanian intellectuals in his future presidential cabinet.[10]

On 16 April, Ivanov on a ceremony received the presidential certificate from the State Election Commission.[11]

Ivanov took office on 12 May 2009, thereby succeeding Branko Crvenkovski. After taking the oath he held his inauguration speech in the Macedonian parliament and made public his priorities - EU and NATO membership, economic recovery, inner stability, interethnic relations and good relations with the neighboring countries, especially with Greece.[12]

The swearing-in ceremony was attended by Crvenkovski, prime minister Nikola Gruevski, the first president of independent Macedonia Kiro Gligorov, military officials, leaders of the religious communities in Macedonia and foreign ambassadors in the county.

On the day Ivanov officially became president of his country, he sent a letter to the president of the United States Barack Obama in which he underlines Macedonia's aim to join NATO and EU and to find a "mutually acceptable solution" to the name differences with neighboring Greece. He also thanked Obama for his words of support at the 2009 NATO Summit.[15]

One day after the inauguration, Ivanov together with prime minister Gruevski travelled to Brussels to meet with European Union and NATO officials.[16][17]

The two main visions, which Gjorge Ivanov promotes as president is the Macedonian model of a multi-ethnic society and Pax Europaea, a united Europe living in peace and respecting the diversity and identity of the nations of Europe.[18][19] 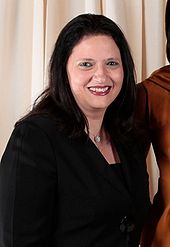 Ivanov is married to Maja Ivanova. Together they have a son called Ivan.[21]