The Dybbuk
For other uses, see Dybbuk (disambiguation). 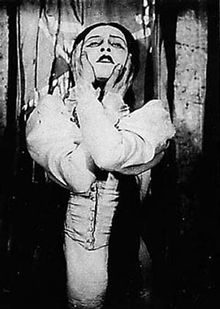 The Dybbuk, or Between Two Worlds (Yid. דער דיבוק אָדער צווישן צוויי וועלטן, Der dibuk oder tsvishn tsvey veltn) is a 1914 play by S. Ansky, relating the story of a young bride possessed by a dybbuk —a malicious possessing spirit, believed to be the dislocated soul of a dead person— on the eve of her wedding. The Dybbuk is considered a seminal play in the history of Jewish theater, and played an important role in the development of Yiddish theatre and theatre in Israel. The play was based on years of research by S. Ansky, who travelled between Jewish shtetls in Russia and Ukraine, documenting folk beliefs and stories of the Hassidic Jews.

Act 1: Hannan, a brilliant talmudic scholar, falls in love with Leah'le, the daughter of Sender, a rich merchant. Sender opposes a marriage between the two, as he prefers a rich suitor for his daughter. In desperation, Hannan decides to study the mystical arts of the Kabbalah, in the hopes of finding a way to win back Leah'le, whom he feels is his predestined bride. When Sender announces that he has found a suitable bridegroom for Leah'le, Hannan drops dead in a state of mystical ecstasy.

Act 2: On the day of her wedding, Leah'le goes to the graveyard, for the purpose of inviting the spirit of her dead mother to attend the wedding. She stops by the graves of a bride and groom who were murdered together before their marriage was consummated, and invites their spirits to the wedding. Finally she is drawn to the grave of Hannan, and leaves the graveyard appearing somehow "changed". Under the wedding canopy, Leah'le suddenly cries out to her intended: "You are not my bridegroom!" and rushes to the grave of the slaughtered bride and groom. A man's voice issues from her mouth, saying "I have returned to my predestined bride, and I shall not leave her". She has been possessed by the Dybbuk.

Act 3: Leah'le is brought to the home of a Hassidic sage who is to exorcise the dybbuk from her body. Several attempts fail, and finally the sage calls upon the chief rabbi of the city for assistance. The chief rabbi arrives and tells of a dream he had, in which Nisn, the long-dead father of Hannan, demanded that Sender, father of Leah'le, be called before the rabbinical court.

Act 4: The room is prepared as a court, and the spirit of Hannan's father is invited to plead its case from within a chalk circle drawn upon the floor. The spirit speaks to the rabbi, and tells him of a pact made between him and Sender, many years ago, that their two children shall be wed. By denying Hannan his daughter's hand in marriage, Sender broke the pact. The rabbis attempt to appease the spirit, and order that Sender must give half of his worldly goods and money to the poor, and say Kaddish over the spirits of Hannan and his father. But the dybbuk does not acknowledge that it has been appeased. Leah'le is left within the chalk circle of protection while the others leave to prepare for her wedding. The image of Hannan appears before her, and she leaves the safety of the circle to unite with her beloved—presumably, in death.

The first version of the play was written in Yiddish, then translated into Russian.[1] In one version, Ansky presented the play to Konstantin Stanislavski, the legendary director of the Moscow Art Theatre, who praised the play and urged Ansky to translate it into Yiddish so that it could be performed "authentically" by a Jewish troupe. In another, the original Yiddish manuscript was lost and Ansky retranslated it either from the Russian version or, in yet another variant of the history, from the Hebrew version translated by Bialik. Ansky died on November 8, 1920, and did not live to see the play professionally produced. As a tribute to Ansky, a production of the play was prepared by a troupe of actors from Vilna during the 30-day period of mourning after his death, and on December 9, 1920, the play opened at the Elyseum Theatre in Warsaw. It proved to be the Vilna Troupe's greatest success. A year after the Warsaw premiere the play was produced again by Maurice Schwartz in New York City's Yiddish Art Theatre and several months later the Hebrew translation by H. N. Bialik was staged in Moscow by the Habima Theatre, under the direction of Yevgeny Vakhtangov, a protege of both Stanislavski's and Meyerhold's and director of the experimental "Studio One" of the Moscow Art Theatre. At that time, Habima was the Hebrew language unit of the MAT. They later emigrated to Palestine and after Israeli independence, became the state's national theatre. Though the Vachtangov production was finally retired from the company's repertory, the play remains a symbol of Habima. At the same time, it is also a symbol of Yiddish theatre, though, in fact, it is hardly a typical representative of it. The first English production ran in 1925 and 1926 at the off-Broadway Neighborhood Playhouse in New York City. This highly regarded production was translated and adapted by Henry G. Alsberg. In 1977, Joseph Chaikin, a central figure in American avant-garde theatre, directed a new translation of The Dybbuk by Mira Rafalowicz, a dramaturg, yiddishist and longtime collaborator of Chaikin's at The Public Theatre. The Royal Shakespeare Company staged Ms.Rafalowicz' translation, directed by Katie Mitchell, in 1992. The most recent UK production was a minimalist, close-focus staging directed by Eve Leigh at The King's Head Theatre in early 2008. Other modern versions include a two-person adaptation by Bruce Myers, a long-time member of Peter Brook's Paris-based company. Mr Myers, who had acted in Joseph Chaikin's production of The Dybbuk, won an Obie when he performed his "Dybbuk" in New York in 1979. The two-actor "Dybbuk" was produced three times by San Francisco's TJT [1] (The Jewish Theatre San Francisco, formerly Traveling Jewish Theatre)and won several awards.

Besides stories, Ansky also collected traditional melodies, one of which he incorporated into this play. When Aaron Copland attended a performance of the play in New York in 1929, he was struck by this melody and made it the basis of his piano trio Vitebsk, named for the town where Ansky was born.[2]

The play has also been adapted into the 1937 film The Dybbuk. With some changes in the plot structure, it was directed by Michał Waszyński in Warsaw, starring Lili Liliana as Leah, Leon Liebgold as Hannan (Channon, in the English-language subtitles), and Avrom Morevski as Rabbi Azrael ben Hodos. The film adds an additional act before those in the original play: it shows the close friendship of Sender and Nisn as young men. Besides the language of the film itself, the movie is noted among film historians for the striking scene of Leah's wedding, which is shot in the style of German Expressionism. The film is generally considered one of the finest in the Yiddish language.

Based on the play, Leonard Bernstein composed music for the 1974 ballet Dybbuk by Jerome Robbins.

It was adapted for CBS Radio Mystery Theater in 1974 under the title The Demon Spirit.[3]

It was adapted for BBC Radio 4 in 1979 starring Cyril Shaps, but is believed lost.[4]