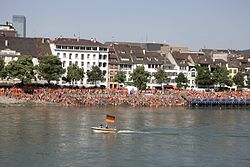 Two German fans wave their flag at a group of Dutch supporters during EURO 2008 in Basel.

Both belong to the strongest football nations of the world, and have met a total of 37 times (of which only 9 matches were competitive) which resulted in 13 victories for Germany, 10 for the Netherlands and 14 draws.

For the Dutch, the origins of the rivalry are primarily based on the anti-German sentiment resulting from World War II in which, during a five-year German occupation, a quarter of a million Dutch people died and the country itself was devastated. In particular, matches up until 1988 show a strong emotional connection between war experiences alongside the sportive element among the Dutch, but inevitably this has lessened with the passage of time.

"I didn't give a damn about the score. 1-0 was enough, as long as we could humiliate them. I hate them. They murdered my family. My father, my sister, two of my brothers. Each time I faced Germany I was angst-filled."[2]
—Wim van Hanegem (b. 1944), Dutch midfielder

When Germany and the Netherlands met in the final of the 1974 FIFA World Cup (which was also their first competitive match since 1945) the Dutch, despite being strong favorites, lost to the Germans which resulted in a national trauma which is poetically referred to as "De moeder aller nederlagen" ("The mother of all defeats") in Dutch.

The loss of the 1974 final was a source of great bitterness among the Dutch and it would not be until 1988 (when the Dutch beat the Germans and went on to become the new European Champions) that the public pressure on the Dutch team to be successful relaxed somewhat. The two competitive matches which would take place before the latter were notoriously aggressive, and created a lot of pressure on both sides. The 1980 match would see Toni Schumacher and Huub Stevens fighting on field, whereas René van de Kerkhof would go on to punch Bernd Schuster in the eye.

"The pressure was tremendous. The popular press was blowing up the old rivalry. We knew that on the pitch the Dutch were ready and waiting for us. We had to stay focused. I think it's a true shame and pity that they regard football as an outlet for their hatred from the Second World War."[3]
—Karl-Heinz Rummenigge (b. 1955), German striker on the 1978 FIFA World Cup match

"Before the game we knew that it was going to be tense. We had sworn to win, because that victory was so important to our sense of pride. To them, beating us is the best thing there is. They hate us so much more than we hate them."[3]
—Karl-Heinz Förster (b. 1958), German midfielder on the UEFA Euro 1980 match

During the semi-final of the UEFA Euro 1988, the Dutch defeated Germany (the host country) 2-1 with a goal by Marco van Basten in the very last minute of the game. After the game Ronald Koeman of the Dutch national team pretended to wipe his backside with Olaf Thon's jersey, creating outrage in Germany.

The Dutch proceeded to win the final against the Soviet Union. When the team returned to the Netherlands and were celebrated in the capital Amsterdam, headcoach Rinus Michels stood in front of the Dutch Royal Palace and said to the crowd: "We won the tournament, but we all know that the semi-final was the real final".

The Netherlands exploded into a mass celebration. As the Dutch team returned home they were paraded through the canals of Amsterdam as people jumped in the water and swam towards the players to congratulate them.

"I had been waiting for that moment for fourteen years. Before the game I remembered my feelings watching TV as a teenager, and that boosted up my anger. I am happy to have been able to give this gift to the older generation, the ones that lived through the War."[3]
—Hans van Breukelen (b. 1956), Dutch goalkeeper on the UEFA Euro 1988 match

Following the 1988 match, anti-German sentiment became much less prominent among the Dutch, as defeating the Germans and going on to win the cup, in Germany itself, was to many the closest they would ever come to repaying Germany. It also marked a new phase in the rivalry because with the war-related sentiment lessened on the Dutch side, the Germans now as a consequence also became far more vocal about the football rivalry, which they had avoided previously. The rivalry continued, but the tone (though still highly competitive) became less aggressive.[4]

In 1990 both teams met again during the second round of the World Cup. This match is seen as the main catalyst for the modern German-Dutch rivalry, in which both Germany and the Netherlands enthusiastically participate.

Before kick-off the Dutch supporters shouted down the Deutschlandlied with boos and the Germans replied by chanting "Deutschland! Deutschland!" during the playing of Het Wilhelmus. The game that followed was notable for its many fouls and other incidents. After Rudi Völler had been hacked down by Frank Rijkaard, who was subsequently booked, Rijkaard spat in Völler's hair. After the following free kick, Völler and the Dutch keeper van Breukelen had contact, both trying to get the ball, and van Breukelen and Rijkaard shouted at Völler and Rijkaard pulled Völler's hair. The referee sent both Rijkaard and Völler off, and Rijkaard spat in Völler's hair a second time when both players left the pitch. Germany won the match 2-1 and went on to win the tournament and become World Champions.[5]

During the 1990s and 2000s a lot of adverts appeared, at first on Dutch television later also on German networks, which referenced the Dutch-German football rivalry. Including;

A number of novelty songs have also been written, these include;