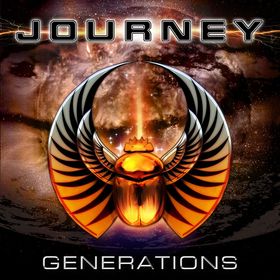 "Generations" is an by the rock band Journey. It was Journey's second full studio album with lead singer and drummer . This is the same line-up as the last two releases, 2001's "Arrival" and 2002's "" EP. The album was given away for free by the band during most of the concerts of the "Generations tour" in 2005, and subsequently released on later the same year.

This was the first Journey album where all of the band members share the lead vocalist duties. sings lead on "Every Generation", the first time he sang lead since "All That Really Matters" (a song originally left off "Frontiers") from the "Time3" box set. sings lead on "A Better Life" and "Never Too Late". provides lead vocals for "In Self Defense" and lends his vocals to "Gone Crazy".

The latter portion of the song "Faith in the Heartland" was heard during the , edition of NBC's "", during a segment about . The song was re-recorded by the band with new vocalist on their 2008 album "Revelation".