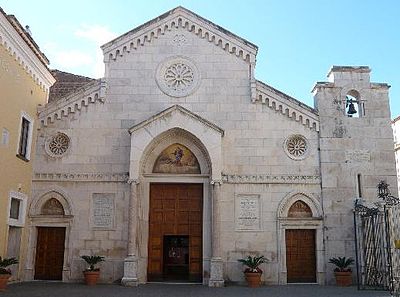 The cathedral of Sorrento, Santi Filippo e Giacomo, was first built around the 11th century.[1] Rebuilt in the 15th century,[1] its Latin cross interior is divided into a nave and two aisles.[2] Its interior includes round arches and ceiling paintings in the nave by the painter Nicola Malinconico.[2] Malinconico’s paintings include Sorrentine Martyrs and Four Patron Bishop Saints. There are also paintings by Giacomo del Po (Assumption, St. Philip, St. James).[2]

Its bell tower has three stories, and is decorated with a clock.[1] The belfry’s base dates to the time of the Roman Empire.[1] The marble altar dates from the 16th century.[2] The marble pulpit and bishop’s throne date from the same century.[2]