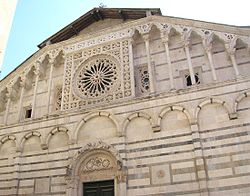 Façade of the Cathedral.

The Carrara Cathedral (Italian: Duomo di Carrara) is a Roman Catholic church in Carrara, northern Italy. Nearly all the exterior is covered by local Carrara marble.

An older church, Ecclesia Sancti Andree de Carraria, is mentioned as existing on this site as early as 1035, but of it, only a bas-relief remains. The church was enlarged for a first time in 1093, when it received the status of pieve.

The lower section of the façade and the side area near the St. John Portal are characterized by a bichrome decoration with geometrical marble tarsias. This part of the building can be dated to the early 12th century by the influences of the Pisan Gothic style on the capitals and the architrave. This style was also widespread in Liguria at the time, as shown by the similarity of the Cathedral's portal with that of the Genoa Cathedral, finished before 1142. The sculptors of the main portal and of the capitals of the first three spans in the interior belonged to the school of Wiligelmo.

In 1151 the church came under the jurisdiction of the Lateranense Canons of San Frediano of Lucca and the second building phase began, lasting until about 1235 when the apse is known to have existetd. There are similarities of style to contemporary Lucchese architecture. The lateral walls continued without the bichrome decoration. In the interior, the capitals are in Corinthian and Composite orders, and the mullioned windows have leaves, human and animals motifs, which are perhaps influenced by ancient Roman structures still existing in Lucca at the time. 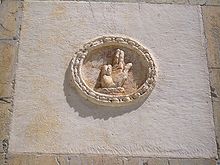 The church has a rectangular plan with a semi-circular apse.

The façade, finished in the second half of the 14th century, has a bichrome decoration with pale and dark marble stone. The portal is crowned by sculptures inspired to medieval bestiaries, and surmounted by a Gothic rose window with twisted columns, each different from the others. The bell tower, standing at 33 m, was also built in the 14th century.

The interior of the Cathedral has a taller nave with wooden trusses, and two smaller cross-vaulted aisles. It houses the sarcophagus of St. Ceccardus, patron saint of Carrara, a 14th century "Annunciation" (example of Pisan sculpture), and a 14th century wooden crucifix by Angelo Puccinelli.

Outside the church is the "Statua del Gigante" (Statue of the Giant), by Baccio Bandinelli.