The Class was a sitcom which originally ran on CBS from September 18, 2006 to March 5, 2007. The series followed the lives of eight very different alumni of the fictional Woodman Elementary School. The show was created by David Crane and Jeffrey Klarik's production company CraneKlarik in association with Warner Bros. Television.

Despite early enthusiasm for the show, nineteen episodes, and satisfactory Nielsen ratings, CBS announced on May 15, 2007 that The Class would not be renewed for a second season.

The Class revolves around a core group of eight 28-year-olds who were all in the same third-grade class 20 years ago. A former classmate brings them all together for a party to celebrate his engagement to a girl he met in the class. However, she ends up dumping him at the party as the reunited classmates get to know each other. "They have separate lives and there are few connections that exist beforehand," Klarik said. "But through the course of the series, connections are made between the characters. It's about following their individual lives -— there's no one living room where they gather."[1]

Beyond the core eight, Crane and Klarik said the show would be populated by several other recurring characters. 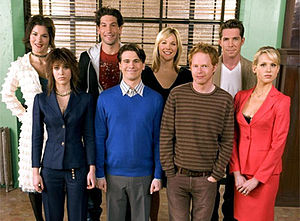 The idea for The Class came about when show creators David Crane and Jeffrey Klarik were cleaning their basement and they found a box of David Crane's school photographs of him with his third grade class. The pair wondered what the third graders were like now and if they were happy with their lives or not.[4]

Due to the overwhelming reputation of the creators, CBS, Fox, and NBC made bids for a full 13-episode season, the latter network was also reported to have offered a 22 episode commitment, prior to seeing a pilot.[5] Ultimately, CBS won the bidding war with an undisclosed amount.

In December 2005, English actress Lucy Punch was the first lead to be cast for the show.[6]

Next to be cast, in January 2006 were Jason Ritter and Jesse Tyler Ferguson as Ethan Haas and Richie Velch respectively.[7]

In February 2006, Jon Bernthal, Heather Goldenhersh, and Andrea Anders (who, at the time was still part of the cast of Friends spin off Joey, which was on hiatus) were cast as Duncan Carmello, Lina Warbler and Nicole Allen. Legendary sitcom director James Burrows was also announced to be directing the pilot.[8]

Last to be cast was Lizzy Caplan as the cynical Kat Warbler. Caplan was still part of The WB drama Related at the time.[10] Related was cancelled due to the merger of UPN and The WB to create The CW.

Also, during the middle of 2006, it was announced that Julie Halston, Sam Harris, and David Keith had been cast in co-starring roles.

It was later announced, that Roseanne's Sara Gilbert had been cast in the recurring role of Fern Velch, Richie Velch's wife.[11]

The Class premiered at 8:00 p.m. on September 18, 2006 on CBS, after being picked up by CBS before they had even seen the pilot episode, The Class Reunites, possibly due to the reputation of its creators, one of which created Friends, the other, a producer of Mad About You.

As of October 9, 2006, CBS shifted the show to the 8:30 p.m. time slot, because its disappointing ratings were affecting the success of How I Met Your Mother in its second year. The ratings then began to steadily improve, and, on Monday October 23, 2006, CBS ordered six more episodes of The Class, bringing the episode order for the first season to 19.[12] No more episodes were picked up. The Class received a 19 episode order in place of 22 because CBS had, at the time, other shows to either finish their seasons or premiere. These shows were The New Adventures of Old Christine and Rules of Engagement.

The Class was the first sitcom to show a live table read session and a live rehearsal. They were shown on Monday January 15, 2007 at 11am PST and Wednesday January 17, 2007 at 1pm PST, respectively.[13] The webcasts were available after the live feed as well.[14]

On May 11, 2007, Zap2It reported that The Class had been cancelled and it was rumored to be replaced by The New Adventures of Old Christine.[15] On May 15, 2007, Variety reported, backing up Zap2It's reports, that The Class would not return for a second season.[16] On May 16, 2007, The Class was officially cancelled at the CBS Upfront presentation,[17] replacing it with The Big Bang Theory. On May 17, 2007, Jesse Tyler Ferguson (Richie Velch) posted a message on his MySpace page relating to the cancellation, as did Sam Harris (Perry Pearl), explaining that the fate of The Class was undecided till the last minute.[18]

Shortly after the cancellation, fans of the show launched a campaign[19] to try and save The Class.[20] The campaign proved to be unsuccessful. The campaign consisted of sending erasers, because of their connection to a school and education, and sending in printed off Moroccan Chicken recipes because of a memorable episode of The Class which saw Lina cooking Moroccan Chicken for Kat, Ethan, Benjamin, Palmer, Richie, Kyle, Duncan, and Nicole.

Seasonal rankings (based on average total viewers per episode) of The Class on CBS:[23]

Note: Each U.S. network television season starts in late September and ends in late May, or occasionally early June, which coincides with the completion of May sweeps.

The Class received generally mixed reviews, receiving a rating of 59 from Metacritic.[24] The most positive reviews were received from The Philadelphia Inquirer. Many critics heavily praised the performances of Lizzy Caplan and Jesse Tyler Ferguson as Kat Warbler and Richie Velch.

Unlike the typical TV group of young adult friends, these former classmates don't meet en masse for coffee or book nights. Instead, they have their own stories, some of which intersect. Based on three episodes confidently supplied to reviewers, the writing stays funny, the performances remain superb, and the direction by James Burrows measures up to his famously high standards. In this Class the biggest point deduction is taken for the annoying laughter of the studio audience.

The show has been criticized because it does not contain a single non-white lead despite being set in Philadelphia, a city with a large black population. The creators of the show have defended this charge, saying that two of the characters, twin sisters, Lina and Kat, are adopted by Korean parents[26] (which, by the end of the series, turned out not to have been covered by the storyline), and "...when we wrote the script, we wrote it color-blind."[26] Television columnist Lisa de Moraes does not believe this, saying that David Crane has used the color-blind excuse since Friends.[26]

The Class was also nominated by the Art Director's Guild for Excellence in Production Design for a Multi Camera Television Series, this was for the Pilot episode, The Class Reunites. Mad TV won the award.[28]

In July 2007, The Class was nominated for the 59th Primetime Emmy Award in the category of Outstanding Art Direction for a Multi-Camera Series, the show lost to How I Met Your Mother.[29]