Digging in an old dump in Meaford, Ontario

Dump digging is the practice of locating and excavating old garbage dumps with the intent of discovering objects which have potential value as collectibles or antiques.[1] These dumps are sometimes centuries old but often date to the late 19th century or early part of the 20th century. Among other things, the practice of dump digging is directly linked to antique bottle collecting and glassmaking.[2] It is a form of historical digging which involves long hours working with a shovel, pick and other hand tools. Finding evidence of potential antique bottle dumps or middens is done by searching areas where it is likely that older garbage was deposited. Diggers generally look for clues of pre1920s junk piles in the woods or down embankments, places where old houses or businesses stand or once stood. Hiking along waterways and swampy areas, particularly during droughts, can also produce important clues and lead to good discoveries. Additionally, many coastal cities are surrounded by landfills or “tips”, places where enormous quantities of trash were deposited in the past intended to create additional acres of viable real estate. It can take many months of searching each of these locations for a decent dig to be surface. 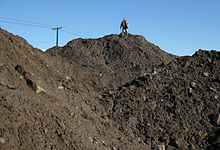 Dump digging for keepsakes, potentially valuable collectibles and antiques is an ancient practice, at least as old as the Pharaohs. Dump digging is an activity which attracts a versatile following of tactile seekers. Largely a salvage oriented activity pursued in ones spare time, the average dump dig does not require a meticulous technical approach in most instances. For practical reasons dump diggers often use a much less forensic style than academic archeologists or museum curators would on their projects. There are many exceptions but dump diggers tend to document by photographing and circulating stories within an interested underground circuit and at bottle shows, lectures and other gatherings open to the general public. Collectively, veteran dump diggers have produced a wide array of antique glass and related items (Lost & Found). Not unlike the privies, cisterns and wells that other historical diggers explore and salvage in, dumps are typically fleeting sources. They are often located on properties which are in the process of being permanently altered by major development and other factors.

Dump digging can be correlated with privy digging, metal detecting, snorkeling, wreck diving and related activities. A percentage of dump diggers become proficient at these as well. Due to time constraints and other logistical factors some career level dump diggers develop a remarkable ability to recover antique bottles and related objects in a relatively brief period of time. A considerable amount of historical material from urban development and related work would be lost without amateur level scavengers, diggers and salvagers. A substantial amount of what the general public knows about these particular spots is what has been passed on by veteran dump diggers and other historical diggers (The Manhattan Well Diggers or New York Artifact Art). These individuals and small groups who actively salvage and reclaim bottles and artifacts in their spare time, document their efforts through photography, article writing, books, films, bottle and artifact shows and other ways. By 1970 more than 100 clubs related to dump digging, privy digging and collecting were formed. These organizations help raise awareness and support and publicize all aspects of historical digging related activities nationwide. 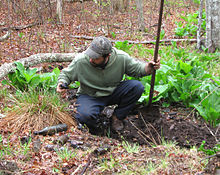 Academics responding to sensationalized speculation and hype regarding dump digging, privy digging, metal detecting, scavenging and so on have helped create some extreme laws which basically criminalize anyone discovering any object of a certain age, usually only 50-100 years old, no matter where it is found.[3] The direct result of a pronounced academic hysteria in place for decades, certain laws intended to safeguard bona fide national and cultural treasures, their artifacts and actual locations or properties, can now be applied to just about any incidental item found while dump digging, privy digging, treasure hunting and collecting, including beachcombing and related activities (see Laws & Reg's).

Dump digging can yield different items and artifacts in each location. A town dump can be somewhat different than a farm dump or a railroad dump but in each case there could be industrial age pottery, stoneware, china, tobacco pipes, military relics like bayonets and gun barrels, musket balls, uniform buttons and other buttons, marbles and an assortment of other things. However, a high percentage of these dump discoveries are routinely found in severe states of decay, damaged or broken altogether. In many cases even the things which have stood the test of time remarkably well have little if any monetary value. There are many exceptions to this general rule that keep dump diggers busy searching and occasionally they are surprised by what they unearth working their sites.

Through the common process known as tipping, vast amounts of refuse generated by towns and cities were dumped into harbors, along marshy shorelines and other areas while forming viable real estate cheaply.[4] Excavating in these areas is also a form of dump digging. Elusive and often deep, small portions of these ashy landfill dumps are sometimes rediscovered during major development projects. In fact, enormous quantities of a given locations everyday trash were actually deposited into these often difficult to reach locales. The bulk of this garbage has never been investigated and at present much of it is still undiscovered. However, through researching and active searching occasionally the opportunity arises to dig into small portions and find old bottles and other objects which survive remarkably well as curiosities, collectibles or antiques. For centuries active waterways were also frequently converted into major dumping spots for household and industrial refuse but they are generally impossible to reach without expensive equipment. Along with the existing information generated from the efforts of dump diggers and others, a wealth of additional information is waiting among these widely distributed landfills and other dumping spots.