In statistics and econometrics, particularly in regression analysis, a dummy variable (also known as an indicator variable) is one that takes the values 0 or 1 to indicate the absence or presence of some categorical effect that may be expected to shift the outcome.[1] For example, in econometric time series analysis, dummy variables may be used to indicate the occurrence of wars, or major strikes. It could thus be thought of as a truth value represented as a numerical value 0 or 1 (as is sometimes done in computer programming).

Thus, a dummy variable can be defined as a qualitative representative variable incorporated into a regression, such that it assumes the value 1 whenever the category it represents occurs, and 0 otherwise.[3] Dummy variables are used as devices to sort data into mutually exclusive categories (such as male/female, smoker/non-smoker, etc.).[4] 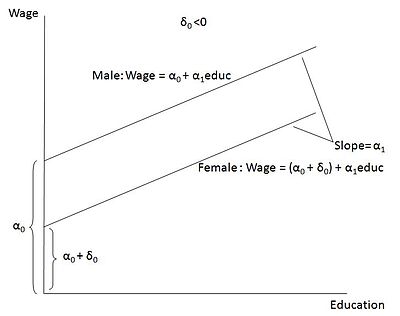 In the model, female = 1 when the person is a female and female = 0 when the person is male. δ0 can be interpreted as: the difference in wages between females and males, keeping education and the error term 'U' constant. Thus, δ0 helps to determine whether there is a discrimination in wages between men and women. If δ0<0 (negative coefficient), then for the same level of education (and other factors influencing wages), women earn a lower wage than men. On the other hand, if δ0>0 (positive coefficient), then women earn a higher wage than men (keeping other factors constant). Note that the coefficients attached to the dummy variables are called differential intercept coefficients. The model can be depicted graphically as an intercept shift between females and males. In the figure, the case δ0<0 is shown (wherein, men earn a higher wage than women).[5]

If dummy variables for all categories were included, their sum would equal 1 for all observations, which is identical to and hence perfectly correlated with the vector-of-ones variable whose coefficient is the constant term; if the vector-of-ones variable were also present, this would result in perfect multicollinearity,[6] so that the matrix inversion in the estimation algorithm would be impossible. This is referred to as the dummy variable trap.

ANOVA model with one qualitative variable

Suppose we want to run a regression to find out if the average annual salary of public school teachers differs among three geographical regions in Country A with 51 states: (1) North (21 states) (2) South (17 states) (3) West (13 states). Say that the simple arithmetic average salaries are as follows: $24,4214.14 (North), $22,894 (South), $26,158.62 (West). The arithmetic averages are different, but are they statistically different from each other? To compare the mean values,Analysis of Variance techniques can be used. The regression model can be defined as:

In this model, we have only qualitative regressors, taking the value of 1 if the observation belongs to a specific category and 0 if it belongs to any other category. This makes it an ANOVA model. 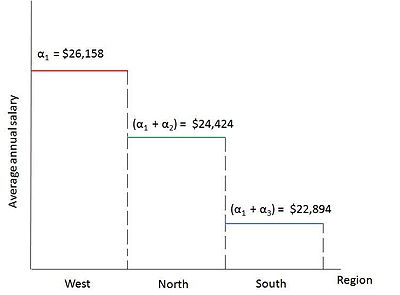 Figure 2 : Graph showing the regression results of the ANOVA model example: Average annual salaries of public school teachers in 3 regions of Country A.

Now, taking expectation of the model on both sides, we get,

Mean salary of public school teachers in the North Region:

Mean salary of public school teachers in the South Region:

Mean salary of public school teachers in the West Region:

(The error term does not get included in the expectation values as it is assumed that it satisfies the usual OLS conditions, i.e., E(Ui) = 0)

Using the given data, the result of the regression would be:

Say the regression output on the basis of some given data appears as follows:

In this model, a single dummy is assigned to each qualitative variable, and each variable has 2 categories included in it.

Here, the base group would become the omitted category: Unmarried, Non-North region (Unmarried people who do not live in the North region). All comparisons would be made in relation to this base group or omitted category. The mean hourly wage in the base category is about $8.81 (intercept term). In comparison, the mean hourly wage of those who are married is higher by about $1.10 and is equal to about $9.91 ($8.81 + $1.10). In contrast, the mean hourly wage of those who live in the North is lower by about $1.67 and is about $7.14 ($8.81 − $1.67).

Now we will illustrate how qualitative and quantitative regressors are included to form ANCOVA models. Suppose we consider the same example used in the ANOVA model with 1 qualitative variable : average annual salary of public school teachers in 3 geographical regions of Country A. If we include a quantitative variable, State Government expenditure on public schools, to this regression, we get the following model: 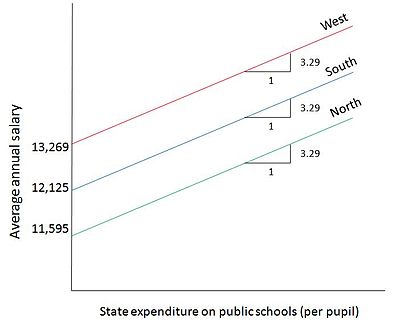 Say the regression output for this model looks like this:

Quantitative regressors in regression models often have an interaction among each other. In the same way qualitative regressors, or dummies, can also have interaction effects between each other and these interactions can be depicted in the regression model. For example,in a regression involving determination of wages, if 2 qualitative variables are considered, namely, gender and marital status,there could be an interaction between marital status and gender; in the sense that, there will be a difference in wages for female-married and female-unmarried.[5] These interactions can be shown in the regression equation as illustrated by the example below.

From this equation, we obtain:

β2 = differential effect of being a female

β3 = differential effect of being a non-white and non-Hispanic

β4 = differential effect of being a female, non-white and non-Hispanic

Thus, an interaction dummy (product of two dummies) can alter the dependent variable from the value that it gets when the two dummies are considered individually.[4]

What happens if the dependent variable is a dummy?

Decision: Choice of Occupation. Dependent Dummy: Supervisory = 1 if supervisor, 0 if not supervisor.

Decision: Retirement. Dependent Dummy: Retired = 1 if retired, 0 if not retired.

When the qualitative dependent dummy variable has more than 2 values (such as affiliation to many political parties), it becomes a multiresponse or a multinomial or polychotomous model.[7]

A regression model in which the dependent variable 'Y' is a dichotomous dummy, taking the values of 0 and 1, refers to a linear probability model (LPM).[8] Suppose we consider the following regression: 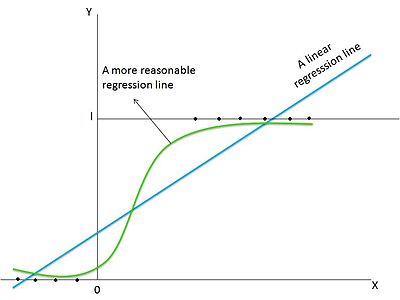 Figure 4 : Linear probability model. The straight linear regression line shows the regression model considered under the LPM. The 'S' shaped curve is a more ideal regression line as the relationships between the variables is often non-linear.

Expectation can now be defined as:

From the above two expectation equations, we can get

i.e., the conditional expectation of the regression model lies between 0 and 1. This example illustrates how the OLS Method can be applied to the regression analysis of dependent dummy variable models.[4] However, some problems are inherent in the LPM model:

1. The regression line will not be a well-fitted one and hence measures of significance, such as R2, will not be reliable.

2. Models that are analyzed using the LPM approach will have heteroscedastic Variances of the disturbances.

5. There might exist a non-linear relationship between the variables of the LPM model, in which case, the linear regression will not fit the data accurately.[9][4]

Figure 4 depicts the linear probability model graphically. The LPM analyzes a linear regression, wherein the graph would be a straight linear line, such as the blue line in the graph. However, in reality, the relationship among the variables is likely to be non-linear and hence, the green 'S'-shaped curve is a more appropriate regression line.[8] 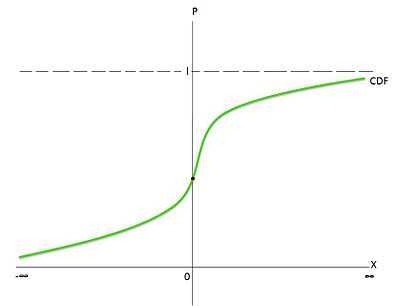 After recognizing the limitations of the LPM, what was needed was a model that had the following features:

2. The relationship between the variables may be non-linear and hence, this non-linearity should be incorporated.

For this purpose, the cumulative distribution function (CDF) can be used to estimate the dependent dummy variable regression. Figure 5 shows an 'S'-shaped curve, which resembles the CDF of a random variable. In this model, the probability is between 0 and 1 and the non-linearity has been captured. The choice of the CDF to be used is now the question. All CDFs are 'S'-shaped, however, there is a unique CDF for each random variable.

The shortcomings of the LPM, led to the development of a more refined and improved model called the logit model. The logit model follows the Logistic CDF. This means that the cumulative distribution of the error term in the regression equation is logistic. [8]

The regression considered is non-linear, which presents the more realistic scenario of a non-linear relationship between the variables.

This relationship shows that Li is linear in relation to Xi, but the probabilities are not linear. [9]

Another Model that was developed to offset the disadvantages of the LPM was the Probit Model. The Probit Model follows the normal CDF. This means that the cumulative distribution of the error term in the regression equation is normal. [8]

The Probit Model is similar to the Logit Model with the same approach used. It used the normal CDF instead of the logistic CDF. The Probit model can be interpreted differently. McFadden has interpreted it using the utility theory or rational choice perspective on behaviour. In this model, an unobservable utility index Ii, which is also known as the latent variable is taken. This index is determined by the explanatory variables in the regression. Larger the value of the Index Ii, greater the probability of an event occurring. Using this, the Probit model has been constructed on the basis of the normal CDF.[9][4]

Precautions in the usage of dummy variables

1. If one dummy variable (that has been introduced as an explanatory variable) has n categories, it is important that only (n − 1) dummy variables are introduced. For example, if the dummy variable is gender, there are 2 categories (female / male). A dummy should be created only for one category, either female or male, and not both. The regression equation should incorporate that dummy along with the intercept term. If this rule is not complied with, the regression would lead to a dummy variable trap. A dummy variable trap is a situation where there is perfect collinearity or perfect multicollinearity between the variables, i.e., there would be an exact linear relationship among the variables. This can be explained as: The value of the intercept is implicitly given as 1 for every observation. Suppose the columns of all the n dummy categories under the qualititative variable are added up. This sum will produce exactly the intercept column as it is. This is the perfect collinearity situation that leads to the dummy variable trap. The way to avoid this is to introduce (n − 1) dummies + the intercept term OR to introduce n dummies and no intercept term. In both these cases there will be no linear relationship among the explanatory variables. However, the latter case is not recommended because it will make it difficult to test the dummy categories for differences from the base category. Hence, the (n − 1) dummies + intercept term approach is the most advised approach to form the regression model.[4][5]