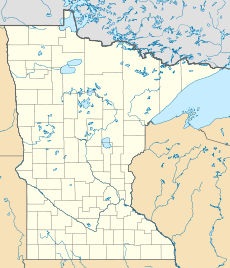 For the civilian use of this facility, see: Duluth International Airport

The City of Duluth purchased the original property for the airport in 1929 from St. Louis County. The airport was constructed on 640 acres (2.6 km2) of land with two 2,650-foot (810 m) sod runways. Subsequently, in 1930, the airfield was dedicated as a public airport. The airport was called the Williamson-Johnson Municipal Airport until 1963 at which time it was renamed Duluth International Airport. Note: The U.S. Air Force occupied the largest portion of the airport (designating its area "Duluth Air Force Base") until its mission termination in in the 80's.

After World War II, the U.S. Air Force constructed permanent and semi-permanent facilities on land leased from the City of Duluth for use by the active Air Force and the Air National Guard. Beginning in 1948, The Minnesota Air National Guard 179th Fighter-Interceptor Squadron built permanent facilities on the northeastern corner of the field while the U.S. Air Force continued to retain and develop most all of the Southern half of the property into an "active-duty" Air Force Base.

The Air Guardsmen were returned to state control and to their facilities (Northeaster corner of the field) and the 11th Fighter-Interceptor Squadron was activated on 1 December 1952 and the 515th Air Defense Group on 16 February 1953 under the 31st Air Division, Central Air Defense Force. The 11th FIS flew from Duluth until 1968, flying F-51H Mustangs, F-86D Sabrejets, F-89H/J Scorpions, F-102A Delta Daggers, and lastly F-106A Delta Dart interceptors. The 515th ADG was re-designated as the 343d Fighter Group (Air Defense) on 18 August 1955 under the "Project Arrow" notable unit redesignation program. The United States Air Force continued to improve its infrastructure at Duluth Air Force Base (the greater portion of the airport) to provide facilities for its aircraft and personnel over the years. The Air Force provided Fire Fighting services for the entire airport as well as runway extensions and runway improvements to allow for larger and faster aircraft. The civillian terminal was built on the southeastern corner of the Air Force Base, below the National Guard Facilities.

On 1 October 1957, the Duluth Air Defense Sector (DuADS) was established at the station under the 31st AD, assuming control of former ADC Central Air Defense Force units with a mission to provide air defense of most of Minnesota and western Wisconsin. On 1 January 1959 DuADS was reassigned to the 37th Air Division

On 1 April 1959 a Semi Automatic Ground Environment (SAGE) Data Center (DC-10) was established at Duluth under the 37th AD. The SAGE system was a network linking Air Force (and later FAA) General Surveillance Radar stations into a centralized center for Air Defense, intended to provide early warning and response for a Soviet nuclear attack .[1] Both the DuADS and the DC-10 SAGE center were placed under the 30th Air Division. DC-10 became operational on 15 November.

The DuADS was inactivated on 1 April 1966 as part of an ADC reorganization, being re-designated as the 29th Air Division, being assigned to Duluth from Richards-Gebaur AFB, Missouri. The SAGE DC with its AN/FSQ-7 computer remained operational under the 29th AD until it was inactivated on 19 November 1969 and re-designated as the 23d Air Division and being placed under First Air Force, although the 29th AD was then further reassigned to Headquarters Aerospace Defense Command on 1 December. On 30 March 1983, DC-10 was inactivated when technology advances allowed the Air Force to shut down many SAGE Data Centers.[2]

The USAF phased out its Air Defense facilities in 1983 with the shutdown of the DC-10 SAGE Data Center [4], but the Minnesota ANG continues to operate from its expanding facilities on the northeastern corner and from areas inherited from the departing U.S. Air Force.

Along with its commercial airport usage, the Minnesota Air National Guard's 148th Fighter Wing (148 FW), an Air Combat Command (ACC)-gained unit, is located at the airport. The air national guard base occupies 153.3 acres (620,000 m2) on the northeast corner of the airport. Additionally, the munitions storage area (physically separated from the main base) occupies 16.71 acres (67,600 m2) north of Runway 09/27. The base has a total of 37 buildings; 18 industrial and 19 administrative. Normal base population is 320 personnel but surges to 1100 at least once each month during unit training assembly (UTA) drill sessions for the entire wing. The 148th previously flew the F-16A ADF and currently flies the F-16C Fighting Falcon.