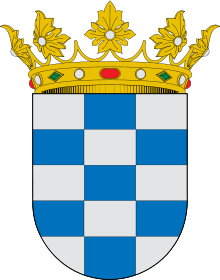 Coat of arms of the dukes of Huéscar

Duke of Huéscar (Spanish: Ducado de Huéscar) is a hereditary title in the Spanish nobility. The title was created in 1563 by King Philip II of Spain, and bestowed on Fadrique Álvarez de Toledo y Enríquez, 6th Marquis of Coria, son and heir of Fernando Álvarez de Toledo, 3rd Duke of Alba. It was granted as a title for the male heirs apparent of the subsequent dukes of Alba, who until then held the marquisate of Coria before succeeding to the dukedom. Its name refers to the village of Huéscar, Granada, one of the manors of the house.

The dukedom was only to be held by the male heirs apparent of the dukes of Alba. María Teresa Álvarez de Toledo, only daughter of Francisco Álvarez de Toledo, 10th Duke of Alba and 11th duchess of Alba after her father's death, was never duchess of Huéscar. It was her son Fernando de Silva, born in his grandfather's lifetime, who received the title at birth. This changed in 1776, when Duke Fernando died without a male heir and his granddaughter, Cayetana, did not have any issue form her marriage to José María Álvarez de Toledo, 15th Duke of Medina Sidonia. She claimed and received the title, becoming the first and only female holder of the dukedom of Huéscar.

Duchess Cayetana died childless and most of her titles were inherited by her nephew Carlos Miguel Fitz-James Stuart, 7th Duke of Berwick. He did not claim, though, the dukedom of Huéscar, which became dormant. 60 years later, his son Jacobo asked for the resumption of the dormant dukedom. On 6 September 1871, it was restored with a grandeeship of Spain[1] on his son and heir Carlos María, and the title has been held since then by the heirs apparent of the Dukes of Alba, following the tradition. The current duchess of Alba, Cayetana Fitz-James Stuart, was never duchess of Huéscar, as it was her son Carlos, born in his grandfather's lifetime, who received the title at birth.