Duet
For other uses of the term, see Duet (disambiguation). 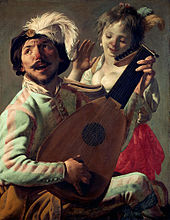 A duet is a musical composition or piece for two performers. In classical music, the term is most often used for a composition for two singers or pianists; with other instruments, the word duo is also often used. A piece performed by two pianists performing together on the same piano is referred to as piano duet or piano four hands. A piece for two pianists performing together on separate pianos is referred to as a piano duo.

"Duet" is also used as a verb for the act of performing a musical duet, or colloquially as a noun to refer to the performers of a duet. The word is also occasionally used in reference to non-musical activities performed together by two people.

In Renaissance music, a duet specifically intended as a teaching tool, to be performed by teacher and student, was called a bicinium (see Étude).