The Princess Louise, Princess Royal and Duchess of Fife (Louise Victoria Alexandra Dagmar; 20 February 1867 – 4 January 1931) was the third child and the eldest daughter of King Edward VII and Alexandra of Denmark. She was the younger sister of George V and the fifth daughter of a British monarch to be styled Princess Royal.

The princess was born Princess Louise of Wales at Marlborough House, the London residence of her parents, then The Prince and Princess of Wales (later King Edward VII and Queen Alexandra). She spent much of her childhood at Sandringham House, her parents' country estate in Norfolk. Like her sisters, Princesses Maud and Victoria, she received a limited formal education. Her paternal grandmother was Queen Victoria, while her maternal grandfather was King Christian IX of Denmark

She was christened at Marlborough House on 10 May 1867 by Charles Longley, Archbishop of Canterbury.[1] 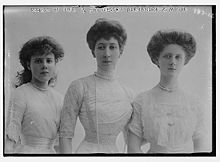 The Princess Royal with her daughters Princesses Maud, left, and Alexandra of Fife, ca. 1911.

On Saturday 27 July 1889, Princess Louise married the 6th Earl Fife (11 October 1849 – 12 January 1912), at the Private Chapel in Buckingham Palace.[2] He was eighteen years her senior, but her third cousin in descent from George III. Two days after the wedding, Queen Victoria created him Duke of Fife and Marquess of Macduff in the Peerage of the United Kingdom. The Letters Patent creating this dukedom contained the standard remainder to "male heirs of the body lawfully begotten." However, it eventually became apparent that the Duke and Duchess would not have a son. Therefore, on 24 April 1900, Queen Victoria signed Letters Patent creating a second Dukedom of Fife, along with the Earldom of Macduff in the Peerage of the United Kingdom with a special remainder: in default of a male heir, these peerages would pass to the daughters of the 1st Duke and then to their male descendants.

The Duke and Duchess of Fife had three children:

In December 1911, while sailing to Egypt, the Princess Royal and her family were shipwrecked off the coast of Morocco. Although they escaped unharmed, the Duke of Fife fell ill with pleurisy, probably contracted as a result of the shipwreck. He died at Assuan, Egypt in January 1912, and Princess Alexandra succeeded to his dukedom, becoming Duchess of Fife in her own right. Princess Alexandra of Fife later married Prince Arthur of Connaught, a first cousin of Princess Louise. Alexandra, therefore, became known as HRH Princess Arthur of Connaught. She adopted the style of her husband, a Royal Highness, since he was the son of Prince Arthur, Duke of Connaught and Strathearn, the third son of Queen Victoria. Princess Louise is the maternal grandmother of the 3rd Duke of Fife. 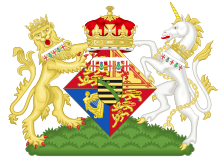 Princess Louise of Wales received the Royal Order of Victoria and Albert in 1885 and the Imperial Order of the Crown of India in 1887. She became a Lady of the Venerable Order of St John of Jerusalem (LJStJ) in 1888 and a Dame Grand Cross (GCStJ) of that order in 1929. She became colonel-in-chief of the 7th Dragoon Guards (the Princess Royal's Own) in 1914. She later served as colonel-in-chief of the 4th and 7th Dragoon Guards when it was formed in 1921.

The Princess Royal died in January 1931, at her home in Portman Square, London and was buried in St. George's Chapel, Windsor Castle. Her remains were later removed to the Private Chapel, Mar Lodge Mausoleum, Braemar, Aberdeenshire.

Upon her marriage, Princess Louise was granted a coat of arms, being those of the kingdom with an inescutcheon for Saxony, all differenced with a label argent of five points, the outer pair and centre bearing crosses gules, and the inner pair bearing thistles proper.[3] The inescutcheon was dropped by royal warrant in 1917.