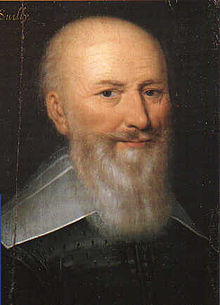 He was born at the Château de Rosny near Mantes-la-Jolie into a branch of the House of Bethune, a noble family originating in Artois, and was brought up in the Reformed faith, a Huguenot. Still a boy, Maximilien was presented to Henry of Navarre in 1571 and remained permanently attached to the future king of France. The young Baron of Rosny was taken to Paris by his patron and was studying at the College of Bourgogne at the time of the St Bartholomew's Day Massacre, from which he escaped by discreetly carrying a book of hours under his arm. He then studied mathematics and history at the court of Henry of Navarre. [1]

A warrior with Henry

On the outbreak of civil war in 1575 he enlisted in the Protestant army. In 1576 he accompanied the Duke of Anjou on an expedition into the Netherlands in order to regain the former Rosny estates, but being unsuccessful he attached himself for a time to the Prince of Orange. Later rejoining Henry of Navarre in Guienne, he displayed bravery in the field and particular ability as a military engineer. In 1583 he was Henry's special agent in Paris, and during a respite in the Wars of Religion he married an heiress who died five years later.

On the renewal of civil war Rosny again joined Henry of Navarre, and at the battle of Ivry (1590) was seriously wounded. He counselled Henry IV's conversion to Roman Catholicism, but steadfastly refused himself to become a Roman Catholic. Once Henry's succession to the throne was secured, the faithful and trusted Rosny received his reward in the shape of numerous estates and dignities.

From 1596, when he was added to Henry's finance commission, Rosny introduced some order into France's economic affairs. Acting as sole Superintendent of Finances (officially) so at the end of 1601, he authorized the free exportation of grain and wine, reduced legal interest, established a special court to try cases of peculation, forbade provincial governors to raise money on their own authority, and otherwise removed many abuses of tax-collecting. Rosny abolished several offices, and by his honest, rigorous conduct of the country's finances was able to save between 1600 and 1610 an average of a million livres a year.

His achievements were by no means solely financial. In 1599 he was appointed grand commissioner of highways and public works, superintendent of fortifications and grand master of artillery; in 1602 governor of Nantes and of Jargeau, captain-general of the Queen's gens d'armes and governor of the Bastille; in 1604 he was governor of Poitou; and in 1606 made first duke of Sully and a pair de France, ranking next to princes of the blood. He declined the office of constable of France because he would not become a Roman Catholic.

Statue of Sully at the Palais du Louvre, Paris.

Sully encouraged agriculture, urged the free circulation of produce, promoted stock-raising, forbade the destruction of the forests, drained swamps, built roads and bridges, planned a vast system of canals and actually began the canal of Briare. He strengthened the French military establishment; under his direction Evrard began the construction of a great line of defences on the frontiers. Abroad, Sully opposed the king's colonial policy as inconsistent with French interests, and likewise showed little favor to industrial pursuits, although on the urgent solicitation of the king he established a few silk factories. He fought in company with Henry IV in Savoy (1600-1601) and negotiated the treaty of peace in 1602; in 1603 he represented Henry at the court of James I of England; and throughout the reign he helped the king to put down insurrections of the nobles, whether Roman Catholic or Protestant. It was Sully, too, who arranged the marriage between Henry IV and Marie de Medici.

Fall from power and last years

The political role of Sully effectively ended with the assassination of Henry IV on 14 May 1610. Although a member of the Queen's council of regency, his colleagues were not inclined to put up with his domineering leadership, and after a stormy debate he resigned as superintendent of finances on 26 January 1611, retiring into private life.

The queen mother gave him 300,000 livres for his long services and confirmed him in possession of his estates. He attended the meeting of the Estates-General in 1614, and on the whole was in sympathy with the policy and government of Richelieu. He disavowed the plots at La Rochelle, in 1621, but in the following year was briefly arrested at Moulins.

The baton of marshal of France was conferred on him on 18 September 1634. The last years of his life were spent chiefly at Villebon, Rosny and his chateau of Sully. He died at Villebon.

By his first wife, Anne de Courtenay (died 1589), daughter of François, Lord of Bontin, he had one son, Maximilien, Marquess of Rosny (1587-1634), who led a life of dissipation and debauchery. By his second wife, Rachel de Cochefilet (1566-1659), the widow of François Hurault, Lord of Chateaupers, whom he married in 1592 and who turned Protestant to please him, he had nine children, of whom six died young. Their son François (1598-1678) was created first Duke of Orval. The elder daughter Marguerite in 1605, married Henri, Duke of Rohan, while the younger Louise in 1620 married Alexandre de Lévis, Marquess of Mirepoix. 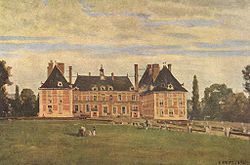 Sully was not popular. He was hated by most Roman Catholics because he was a Protestant, by most Protestants because he was faithful to the king, and by all because he was a favorite, and was seen as selfish, obstinate and rude[citation needed]. He amassed a large personal fortune, and his jealousy of all other ministers and favorites was extravagant. Nevertheless he was an excellent man of business, inexorable in punishing malversation and dishonesty on the part of others, and opposed to the ruinous court expenditure which was the bane of almost all European monarchies in his day. He was gifted with executive ability, with confidence and resolution, with fondness for work, and above all with deep devotion to his master. He was implicitly trusted by Henry IV and proved himself the most able assistant of the king in dispelling the chaos into which the religious and civil wars had plunged France. To Sully, next to Henry IV, belongs the credit for the happy transformation in France between 1598 and 1610, by which agriculture and commerce were benefited and foreign peace and internal order were reestablished.

During his life, Sully inherited or acquired the following titles: Duke of Sully; Peer of France; Marshal of France; Sovereign Prince of Henrichemont & Boisbelle; Marquess of Rosny & of Nogent-le-Béthune; Count of Muret and of Villebon; Viscount of Meaux and of Champrond; Baron of Conti, of Caussade, Montricoux, Montigny, Breteuil & Francastel; Lord of La Falaise, of Las, Vitray, Lalleubellouis & other places.

His ancestry is traced at length and his career more briefly, reproducing original documents, in the monumental Histoire Généalogique de la Maison de Béthune by the historian André Duchesne (Paris, 1639)