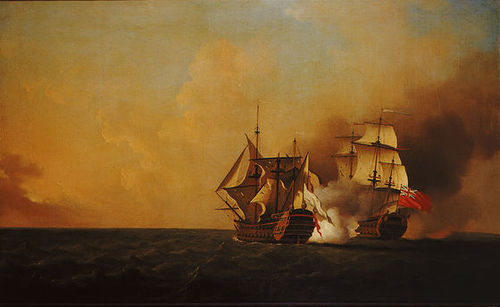 Samuel Scott's Action between HMS Nottingham and the Mars. Le Mars was returning to France after the failed Duc d'Anville Expedition, 11 October 1746 and was subsequently captured

The Duc d'Anville Expedition (June–October 1746) was sent from France to recapture peninsular Acadia (present-day mainland Nova Scotia). The expedition was the largest military force ever to set sail for the New World prior to the American Revolution.[1] The effort to take the Nova Scotian capital, Annapolis Royal was also supported on land by a force from Quebec. Along with recapturing Acadia from the British, d'Anville was ordered to "consign Boston to flames, ravage New England and waste the British West Indies." News of the expedition spread fear throughout New York and New England.

The expedition was a complete failure. It was beset by bad weather and took three months to cross the Atlantic Ocean. Many in the ships' crews and the troops being transported fell ill before the expedition finally reached Chebucto Bay (present-day Halifax Harbour), and d'Anville died not long after its arrival. His successors in command attempted to mount an assault on Annapolis Royal, but eventually gave up and returned to France.

Henry Wadsworth Longfellow immortalized the expedition with his poem A Ballad of the French Fleet.

The British had conquered Acadia by defeating the capital in the Siege of Port Royal (1710). Over the next fifty years, the French and their allies made six unsuccessful military attempts to regain the capital. The Duc d'Anville expedition, which was coordinated with Ramezay's expedition from Quebec, was the last French attempt to retake the capital of Acadia. After the stinging French defeat at the Siege of Louisbourg (1745) during King George's War, King Louis XV sent the expedition to win back Acadia by conquering the capital Annapolis Royal, Nova Scotia. 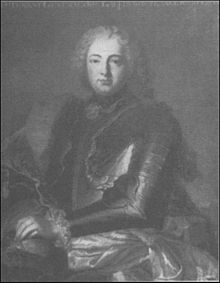 The expedition included 11,000 men and a fleet of 64 ships.[2] The expedition was led by French Admiral Jean-Baptiste Louis Frédéric de La Rochefoucauld de Roye, Duc d'Anville. The fitting-out of this fleet was slow and difficult, and it did not set sail from Île-d'Aix, France until 22 June 1746. A subsequent storm in the Bay of Biscay and adverse winds slowed the transatlantic crossing. Disease broke out on the ships – typhus and scurvy.

The fleet ran into a long, dead calm off the Azores. This ended in a storm, during which several vessels were struck by lightning, which, in one case, caused a magazine explosion that killed and wounded over thirty men. By 24 August, the expedition had been at sea for over two months but was still three hundred leagues (nine hundred miles) from Nova Scotia.[3]

On 10 September, lead elements of the expedition had arrived at Sable Island. Three days later the vessels were scattered by a violent gale that seriously damaged some ships, which were consequently forced to return to France.[4] One of the damaged vessels was Le Mars (pictured above). She was heavily damaged and taking on water in the storm off Sable Island and decided to return to France with the Le Raphael. Several weeks later another gale hit, damaging the ship Le Mars further and separating her from Le Raphael. Twenty leagues off Ireland the HMS Nottingham severely damaged Le Raphael in an attack and took her as a prize.[5] (During the French and Indian War, the ship Le Mars sank in Halifax Harbour after hitting a rock - known to this day as "Mars Rock".)[6]

An expedition under the command of Jean-Baptiste Nicolas Roch de Ramezay was sent from Quebec to work with d'Anville's expedition. French priest Jean-Louis Le Loutre was to coordinate the two expeditions. De Ramezay's force arrived in Nova Scotia in July 1746. He had 700 soldiers and 21 officers. He made camp at Beaubassin, where he was met by 300 Abenaki from St. John River and about 300 Mi'kmaq from Nova Scotia. The total French-Indian force numbered close to 1,300 men.[7] De Ramezay's soldiers spent the summer and the fall waiting for the arrival of the long overdue D'Anville expedition.[8] (During this time period, Ramzay sent troops to British-occupied Port-La-Joye on present-day Prince Edward Island. In a fierce battle, Ramzay's men killed forty British troops and imprisoned the rest.)[9]

The d'Anville expedition finally reached Nova Scotia in late September, after enduring a three month voyage. Hundreds of sailors and soldiers had died and hundreds more were gravely ill, suffering from disease. Forty-four vessels anchored in Chebucto (present day Halifax, Nova Scotia), where the expedition would spend the next five weeks.[10] 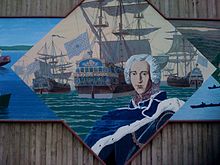 The sick were brought ashore near Birch Cove in the harbour's Bedford Basin. Some recovered from scurvy with the arrival of fresh supplies brought by the Acadians from Grand Pre and Pisiquid, but typhus and typhoid continued to ravage the men.

Within six days of his arrival, on 27 September, d'Anville died of disease. (He was buried on Georges Island in what is now Halifax Harbour. His remains stayed there for three years before being taken to Louisbourg in September 1749 during the establishment of Halifax.)

On 29 September a council of war led by d'Anville's replacement, Constantin-Louis d'Estourmel, decided to send 1,500 men from the expedition and 300 from the Ramezay expedition to attack Annapolis Royal. D'Estourmel became overwhelmed and discouraged and quickly resigned after a suicide attempt.[11]

The next to assume control of the expedition was the Governor General designate of New France and passenger with the fleet Jacques-Pierre de Taffanel de la Jonquière, Marquis de la Jonquière. The plan to attack the capital Annapolis Royal intensified, even while men continued to die of disease. By mid-October, 41 percent of the men who reached Chebucto with the fleet were dead or seriously ill – 2,861 petty officers, seamen and soldiers. The contagion spread to the Mi'kmaq and de Ramezay's men.[12]

By mid-October 300 of de Ramezay's troops arrived at Annapolis Royal. The French and Indian fighters spent 21 days camped in the Annapolis area waiting for the French ships to arrive with troops and siege artillery. They cut off British land communications with Minas and attempted to stop all contact between the fort and the Acadians.[13]

On 24 October, 42 vessels left Chebucto, with almost 50 Acadian pilots from Minas. Three hospital ships set sail for France with the most critically ill. Thirteen of the ships carried 94 officers and 1,410 soldiers to conduct the siege. Two days later, as the fleet was off Cape Negro, Nova Scotia La Jonquiere changed his mind. He ordered his ships back to France and dispatched orders to Annapolis Royal for de Ramzay to withdraw.[14]

In response to the threat posed by the French expeditions, Massachusetts Bay Governor William Shirley sent Colonel Arthur Noble and hundreds of New England soldiers to secure control over Acadia and drive de Ramezay out. One of the most startling successes of de Ramezay's campaign was his defeat of Colonel Nobel in the Battle of Grand Pré (1747). De Ramezay attacked and defeated a superior force of Noble's militia who were billeted in houses in the Acadian settlement of Grand-Pré, in the Minas Basin at the top of the Bay of Fundy.

The tragedy of the French expedition had serious implications for Acadian participation in the rest of the war. Any confidence that Acadians may have had that France would be victorious was shaken. After the failure of the expedition, Nova Scotia Governor Paul Mascarene told Acadians to avoid all "deluding Hopes of Returning under the Dominion of France."[15] One French officer noted that when de Ramezay was withdrawing from Annapolis Royal, the Acadians were alarmed and disappointed, feeling they were being abandoned to British retribution.[16]

The last major engagement in the area of Annapolis Royal was during the French and Indian War in the Battle of Bloody Creek (1757).