Jerusalem is a Swedish Christian rock band, founded in 1975 by Ulf Christiansson. It was one of the first bands to combine Christian lyrics with a hard rock sound. 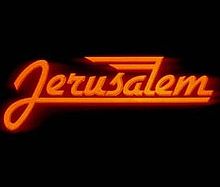 Jerusalem's message was primarily aimed at youth, with their lyrics describing the band's relationship to God in an ordinary, but radical way. The band's purpose was expressly evangelistic. Their concerts have been described as a series of revival meetings which often included altar calls and occasionally exorcisms.[1] When the band first toured in the mid-1970s in Sweden, their combination of Christian lyrics with a hard rock sound was very controversial. The band was only permitted to perform at a few churches.

Over time, Jerusalem gained broader acceptance, and after three years of touring record companies began making offers to record the band. The Christian record company Prim signed Jerusalem, without much expectation of success. However, the band's self-titled debut album, Jerusalem, became an instant hit among Christian listeners, and within the first six months the record sold 20,000 copies, unheard of within the genre of Christian rock in Europe.[1]

Buoyed by the response, Jerusalem toured both in Sweden and the rest of Scandinavia. The next album, Volym 2, was released in 1980. This record, which was also dubbed into an English version, exposed Jerusalem to a global audience. The band's schedule became filled with tours in Germany, France, England, Belgium, and Finland.

From the Christian Greenbelt festival in England, where Jerusalem participated during the summer, Americans brought the record to the United States and Glen Kaiser, leader of Resurrection Band, one of the biggest Christian rock bands in the US. Kaiser gave the record to Pat Boone, who owned the Lamb & Lion record company. Lamb & Lion subsequently released Jerusalem's records in the United States and Canada.[1]

In 1981 Jerusalem released their third album, Krigsman (Warrior), which became a sales success in Sweden, Europe, USA, and Canada. In the fall of 1981, Jerusalem toured the United States. European, radical Jerusalem, with their heavy hard rock, took the USA by storm.[citation needed]

At this time the band consisted of Ulf Christiansson on guitar and vocals, Dan Tibell on keyboards, Peter Carlsohn on bass (replacing Anders Mossberg), and Michael Ulvsgärd on drums (replacing Klas Anderhell).

With the fourth album, Vi Kan Inte Stoppas (Can't Stop Us Now), Jerusalem changed their style to a more melodic rock sound[1] with lyrics that were not as overtly God-centered. This lost the band support amongst many Christian fans. The album, recorded in Belfast, Northern Ireland, led to another tour in the USA, where the video also was shown on MTV. Despite changes in the band's lyrical approach, the success was enormous, especially amongst non-Christian rockers.[citation needed] During the following years, Jerusalem mostly toured abroad. Between 1983 and 1985, Jerusalem made several very successful tours in USA, which finally resulted in a live album, In His Majesty's Service - Live in USA, recorded in Shreveport and Dallas.

Eventually, however, this all became too much, and the members of the band tired out. In 1985, Jerusalem quit touring and enrolled in the Word of Life Bible School.[1]

In 1987, Jerusalem released Dancing on the Head of the Serpent. Reidar Paulsen played the keyboards. The record sleeve depicted an army boot trampling on a demon. This radical image proved too shocking for Swedish Christians. Some record stores banned the album,[1] while others still stocked the album, but sold the record under the counter. After this album the band took a six-year hiatus.

In 1992, the band moved back to Gothenburg, Sweden and recorded Prophet. It ultimately became the Jerusalem album that garnered the most favourable reviews.

The band has announced their new studio album called She, to be released October 22, 2010.[dated info]

A lot of different musician were at one time or another part of Jerusalem. These are just the ones who recorded with Jerusalem

For albums released in both Swedish and English versions, the English titles are in parentheses.