Bosanska Dubica (Serbian Cyrillic: Дубица / Козарска Дубица, pronounced [dǔbitsa] / [kɔ̌zaːrskaː dǔbitsa]) is a town and municipality located in northern Bosnia and Herzegovina and is administratively part of Republika Srpska. Dubica, for short, is situated in the eastern part of Bosanska Krajina region. The municipality of Hrvatska Dubica lies to the north, in Croatia. Dubica is situated 26 km (16 mi) from the Zagreb–Belgrade Highway. The town and its suburbs border the Republic of Croatia to the north, the town of Bosanska Gradiška to the east, the town of Bosanska Kostajnica to the west, and the town of Prijedor to the south. The land area of Kozarska Dubica is 499 km2 (193 sq mi) and the population is estimated at about 31,000, even though no census has been held since 1991.

Bosanska Dubica during the early 1920s

During the Bosnian war (1992–1995) about 6,000 Bosniaks were expelled from their homes, while many Serbs from Croatia settled in Bosanska Dubica often in those Bosniak homes. The bridge between Bosanska Dubica and Hrvatska Dubica was destroyed on the Bosnian side. Many moderate Bosnian Serbs fled as well, since they were harassed by local authorities if they did not support the Serb campaign and ethnic cleansing. During the war the city was under siege by the Croatian regular army (HV) in failed operation called Operacija Una 95. On September 18, 1995 the Croatian army made a descent across Una river and took control of some parts of Dubica. At factory Knežopoljka they shot every civilian to come by on regional roadway. In all 44 civilians were killed.[2][non-primary source needed] Next day on 19 September Serbian units from other parts of frontline came and forced the Croatian army back over the river. That day Serbian planes from Banja Luka airport attacked the Croatian army in vicinity of village Živaja and Šaš in Croatia. Suffering serious blows, the Croatian army was defeated on the second day of their operation.[3] 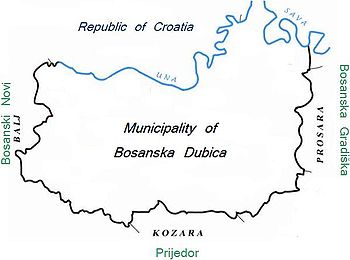 According to the 1910 census, the absolute majority in the Bosanska Dubica municipality were Orthodox Christians (82.94%).

According to the 1991 census, the population of the Bosanska Dubica municipality was 31,577, including:

In the town itself, Muslims by nationality (Bosniaks) had a slight majority. During the Bosnian war, around 6,000 people, mostly Bosniaks, were forced to leave the town and municipality, while a similar number of Serb refugees from Croatia and/or other Bosnian towns, found shelter and settled in Bosanska Dubica.

Due to the Bosnian War (1992–1995) much of the traditional population of Bosanska Dubica has been displaced outside of Bosnia and Herzegovina. 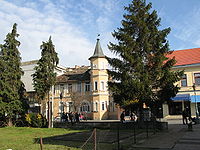 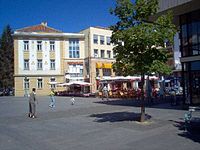 In 2006, 90% of the inhabitants of the municipality were ethnic Serbs.[4] The population is believed to consist of 28,000 Serbs, 2,700 Bosniaks, 200 Croats, and 100 others.[citation needed] However, it has to be mentioned that the demographic picture of Bosanska Dubica today differs from the period before 1991.

Situated in the valley of the rivers, the Municipality of Dubica has more than 316.09 square kilometres of arable land, thanks to which agriculture is an important development factor. Agricultural production is focused on land cultivation, cattle breeding industry, raising of industrial crops, and lately there has been the start of the development of fruit and wine growing.

Most of the economy comes from the livestock. The largest milk production company is the Mlijekoprodukt located near the town of Bosanska Dubica. It continues its tradition of growing fruits in the area. The climate of Kozarska Dubica is great for the cultivation of different kinds of vegetables.

Kozarska Dubica also has an important construction company. It is called IGP "UNA". The company was established in 1962. All of the workers are completely qualified to work with different modern machines. Some important complexes that the company has built are: Zepter, the local hospital, the local high school, and the restoration of the severely damaged bridge.

Prior to the war there was a sugar factory operating as well. 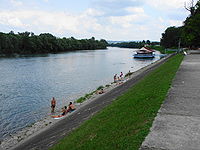 Una river with beach and barboat St. Nikola in background.

Hunting is a traditional sport of the Municipality of Dubica. One hunting organization is called Jelen (Deer) The area used for hunting is around 499 km². Hunting is extravagant in Dubica since it has two big mountains Kozara and Prosara. The hunting area is filled with rich forests. Hunting ranges from deer to smaller animals such as wild ducks. Every April the international competition with dog hunting occurs in Dubica.

Fishing is highly important in Dubica. Since, Dubica is located right on the Una River, fishing has developed into a long time tradition. People from different areas come to fish. Also the Sava is located not far from Dubica at Jasenovac, where the Una enters the Sava.

Dubica has an old tradition in sports that dates back to the early 20th century. In the 1930s Bosanska Dubica establishes the Soccer Club Una. After World War II, Dubica has an upsurge of different sport organizations. In 1962 the handball club Borac was established. Then on February 11, 1973, the Basketball Team Una was created. In 1982 the Karate Club Knešpolje was founded. Even today the different sports remain an important part of Dubica. There are both male and female teams for handball. Also there are a couple of karate clubs and chess clubs.

A view from nearby Krivdiča hill.

Every year outside Bosnia and Herzegovina, the annual Bosansko Dubičko Veče is held. It is a celebration that brings together displaced Bosnians from Bosanska Dubica. The cities that hold the celebration in the United States are: Chicago and St. Louis. In Chicago it is always held on the Saturday before Memorial Day. It is hosted at the Rumija Cultural Center. Sydney, Australia, also holds the same celebration in order to gather Bosnians of Bosanska Dubica from different Australian and New Zealand areas. These are year-to-year celebrations that bring together Bosnians from Bosanska Dubica. There is work on creating a congress that would meet once every two years, in order to help young children, born outside Bosanska Dubica, retain the traditions and culture. The celebrations are primarily filled with Bosniaks, however, many Croats and Bosnian Serbs come to show their respect towards their town, Bosanska Dubica and reunite with former neighbours.