A dual-sport, colloquially known as "dualie" or an "on-off road bike" is a type of street-legal motorcycle that is designed for both on and off-road use. The terms 'All-road' and 'Dual-purpose' are also used. Dual-sports are equipped with street-legal equipment such as lights, speedometer, mirrors, horn, license plate mounting, and muffler and can, therefore, be registered and licensed. Examples of dual-sport models are found in Category: Dual-sport motorcycles. 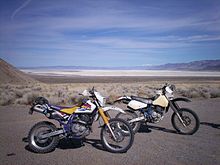 The Suzuki DR650 on the left and 1990 DR350 on the right are on a desert excursion including sandy roads, rocky two-tracks, dry lakes and rough single-tracks.

The concept of a versatile motorcycle equally at home on dirt and pavement is as old as motorcycling itself. Most roads were still unpaved when motorized bicycles first appeared around 1900. In a sense, all motorcycles at that time were dual-sports, intended to be used on dirt as well as pavement. Advertisements well into the 1920s depict motorcycles on dirt roads, raising clouds of dust. By 1940, most roads in developed countries were paved and motorcycles had become heavier and more oriented to the street. In the 1950s and 1960s British manufacturers such as Triumph and BSA offered versions of their relatively light street motorcycles with high exhaust pipes, and called them scramblers.[1]

Yamaha is credited with rekindling popular interest in dirt worthy motorcycles that could also be ridden on the street. In 1968 they introduced the hugely successful DT-1 based on a 250 cc two-stroke engine. Other manufacturers soon followed with similar models called "enduros". These light weight machines were good on trails and adequate on pavement.

Over the next 20 years, manufacturers began producing heavier and less dirt worthy enduros based on four-stroke engines, as they searched for better combinations of weight, power, durability, performance and comfort. The heavier machines were less popular with “real” dirt riders, who began modifying them to create lighter and more competent trail machines.

Suzuki introduced the DR350 in 1990 and promoted it as a DualSport or “dirt bike with a license plate”. The terms "dual-sport" and “dualie” were quickly adopted by riders and the motorcycle press.

Manufacturers use several different names for their dual-sport models. Suzuki uses DualSport to describe its products. Kawasaki describes its offerings as dual purpose, Honda lists its entry under off-road, and other manufacturers describe machines as enduros, or simply list them as model numbers. A few models are described as "adventure bikes". Despite these differences in terminology, these models can be described as dual-sports, which are street-legal motorcycles that can be operated on pavement, dirt roads and trails. Dual-sport motorcycles are the most practical choice in rural areas in many parts of the world, and when traveling on unpaved trails they can often be a necessity. 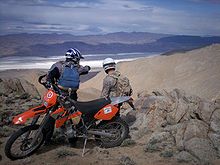 lightweight KTM 525EXC, based on an off road racing motorcycle

The BMW 1200GS in front is a good choice for monthlong trips; the Suzuki DRZ400 behind is best for day trips and an occasional overnighter.

There are four ways of creating dual-sports. Some manufacturers add street-legal equipment to existing off-road motorcycles. These bikes are usually light and powerful, at the expense of shorter service life and higher maintenance. This approach is currently taken by European manufacturers such as KTM and Husqvarna. Other manufacturers start with a clean sheet of paper and design a new model designed for a specific combination of dirt and street use. These motorcycles are usually heavier and more durable than the models derived from off-road motorcycles. This approach is currently taken by Aprilia, BMW, Honda, Suzuki, Yamaha and Kawasaki. Several manufacturers modify street motorcycles to make them more dirt worthy. These bikes are usually more at home on pavement. Finally, owners add street-legal equipment to off-road bikes. However, some states only license motorcycles that meet emissions requirements.

Dual-sports may be grouped by weight and intended purpose.

These types are only approximate and new models that split the boundaries and offer different combinations of features appear each year. However, the laws of momentum and inertia always favor lighter dual-sports for tight, rough trails. Heavier dual-sports that emphasize rider comfort and the capacity to carry luggage are better choices for long highway trips.

Dual-sports, by definition, are compromises - giving up some dirt performance to be ridden on the street and some street performance to be ridden in the dirt. The merits of a particular model can only be judged relative to the owner’s intended mix of dirt and street riding. Although aficionados may argue the merits of different models, versatile dual-sports can be desirable alternatives to more specialized motorcycles that can only be ridden in one environment.

When dual-sports are fitted for long distance travel with accessories such as oversized gas tanks, luggage, and other distance-oriented gear, they are often referred to as "adventure bikes". These motorcycles offer touring capabilities, but are less comfortable on long pavement trips than full fledged touring motorcycles such as the Honda Goldwing series.

A supermoto (also known as a supermotard or motard) is typically a converted motocross bike with less suspension travel, smaller front and rear wheel wheels (typically 17" at both ends), road tires and an oversized front brake designed to be primarily run on asphalt. When made street legal, these bikes may also be considered to be a type of dual-sport. In this case, these motorbikes could be seen as somewhere between a sport bike and a dual-sport.