The Masquerade is a mid-sized concert venue located in Atlanta, Georgia, United States. The venue has both indoor and outdoor concert space, and the live music mostly consists of alternative music styles, such as Indie rock, Metal, Punk Rock, Rockabilly, and Electronic.

The building was once the Dupre Excelsior Mill (the actual name as of 1911 was "Du Pree Manufacturing Company Excelsior Factory")[1] is a former excelsior mill located at 695 North Avenue in the Poncey-Highland neighborhood of Atlanta, Georgia. The mill may have been built as early as 1890 by DuPre Manufacturing Co (or Du Pree Manufacturing Company as referred to on contemporary maps[1] ). However, the mill fails to appear on Atlanta city maps in 1892[2] as well as 1899[3] which show the property as vacant. The first possible reference to the mill exist in the report of the death of Hubert Neal on July 17, 1899. According to the report, his accident occurred at the Atlanta Excelsior Works[4] (which may or may not be the same facility since a the time there were 3 excelsior factories in Atlanta).[5] The earliest concrete confirmation of the mill seems to be three lawsuits filed against Dupre in 1907 for accidents that occurred at the facility.[6]

The mill does appear on the Sanborn-Perris Fire Insurance map of 1911 (section 250). At that time, the only road connecting it was Angier Street. It was noted to have been heated by Steam power, have no lights, a private water supply from a well 10 feet in diameter and 40 feet deep. A watchman makes hourly rounds to seven stations.[1]

The actual equipment required to run the mill was relatively simple: • a small emery grinding machine • a grind stone • a saw table • a bailing press. • An engine and a boiler In 1886, the cost for the actual excelsior grinder was $125 for the best grade on the market. The more machines, the greater the output. Staffing was simple a manager with "a boy" could run up to four machines. Additional workers would be needed to move the 200-pound (91 kg) excelsior bails.[5]

The Post-depression era saw an expansion of the mill in the late 1930s and early 1940s. Unfortunately, after the Second World War, the demand for excelsior was radically reduced.[8] The introduction of foam rubber virtually eliminated the use of excelsior as stuffing material. Even so, the secondary packing material market continued for a short time. By the mid 1960s, the demand for excelsior was gone and the mill operated more as a storage facility than active production facility. In 1977, all the major mills in the Atlanta area shut their doors.[9] 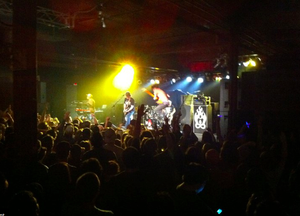 A concert at The Masquerade

In 1977-1978, the mill was converted over to a pizzeria and barrio. With a Wurlitzer Organ as part of the setting, the Excelsior Mill featured everything from movies to bands to Shakespearian plays over its decade long run, the pizza and barrio house survived until 1989. The Excelsior Mill is fondly remembered by blues fans as the residence in later years of blues legend Willie "Piano Red" Perryman. and an in-house pipe organ.[10]

In September 1989,[11] it became The Masquerade, now a well-known nightclub and concert venue.

In January 2006, the club was sold to developers Poncey Highlands Investors, who agreed not to destroy the building, for which many locals are seeking historic designation.