The Samuel Francis DuPont Memorial Fountain by Daniel Chester French was commissioned by the DuPont family in 1917, installed 1920, and was dedicated on May 17, 1921.[1] It is located at Dupont Circle, Washington, D.C., at the intersection of Massachusetts Avenue NW, Connecticut Avenue NW, New Hampshire Avenue NW, P Street NW, and 19th Street NW. The fountain is a contributing monument to the Civil War Monuments in Washington, DC, of the National Register of Historic Places.

The inscription reads:
Samuel Francis Dupont - Rear Admiral, United States Navy, 1803-1865
This Memorial Fountain Replaces a Statue Erected by the
Congress of the United States in Recognition of
His Distinguished Services. 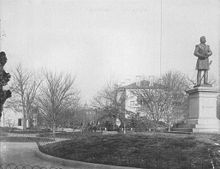 In 1871, the Army Corps of Engineers began construction of the traffic circle, then called Pacific Circle, as specified in L'Enfant's plan.

On February 25, 1882, Congress renamed the circle to Dupont Circle, and authorized a memorial statue of Samuel Francis Du Pont, in recognition of his service as a rear admiral during the Civil War. The statue, sculpted by Launt Thompson, was erected in 1884, and the circle was landscaped with exotic flowers and ornamental trees.[2][3]

In 1921, the current double-tiered white marble fountain replaced the statue, which was moved to Rockford Park in Wilmington, Delaware.[4] Daniel Chester French and architect Henry Bacon, the co-creators of the Lincoln Memorial, designed the fountain, which features carvings of three classical nudes symbolizing the sea, the stars and the wind on the fountain's shaft.[2][5] The marble carving was executed by the Piccirilli Brothers. [6]

In the late 1990s the fountain was restored and renovated with work by Constantine Seferlis.[7] 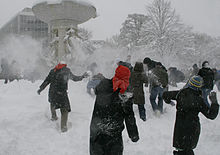 The park within the circle is a gathering place for those wishing to play chess on the permanent stone chessboards. Tom Murphy, a homeless championship chess player, is a resident.[8] In 2009, a tug of war was sponsored by the Washington Project for the Arts.[9]

The park has also been the location of political rallies, such as those supporting gay rights,[10] those protesting the 2003 invasion of Iraq,[11] the World Bank, and the International Monetary Fund.